How to double up an existing single beam without disturbing the structure?

I am not a carpenter, so please forgive me if I use some terminology wrong. I will do my best to describe my situation, and then my question.

I have an existing "lean-to" style porch roof that itself seems in good shape, but the structures that support it don't make much sense to me, so I am starting a project to upgrade\repair\reinforce the supports for the roof. On one side, the rafters are toe-nailed to a ledger board at the house. On the other, they are set atop a single 2x6 beam (the roof beam length is about 15'). The beam is supported by 4 columns\posts (this is where we get to the odd part). The posts consist of 4x4s that run from the footings (currently a cinder block buried in the ground) up to along side the beam and connected to the beam with lag bolts and nails. There is a 2x4 attached to the side of the post with lag bolts that sits below the beam but does not extend all the way down to the footings. All 4 columns are of this type of construction. I tried to make a simple sketch of what I am describing: 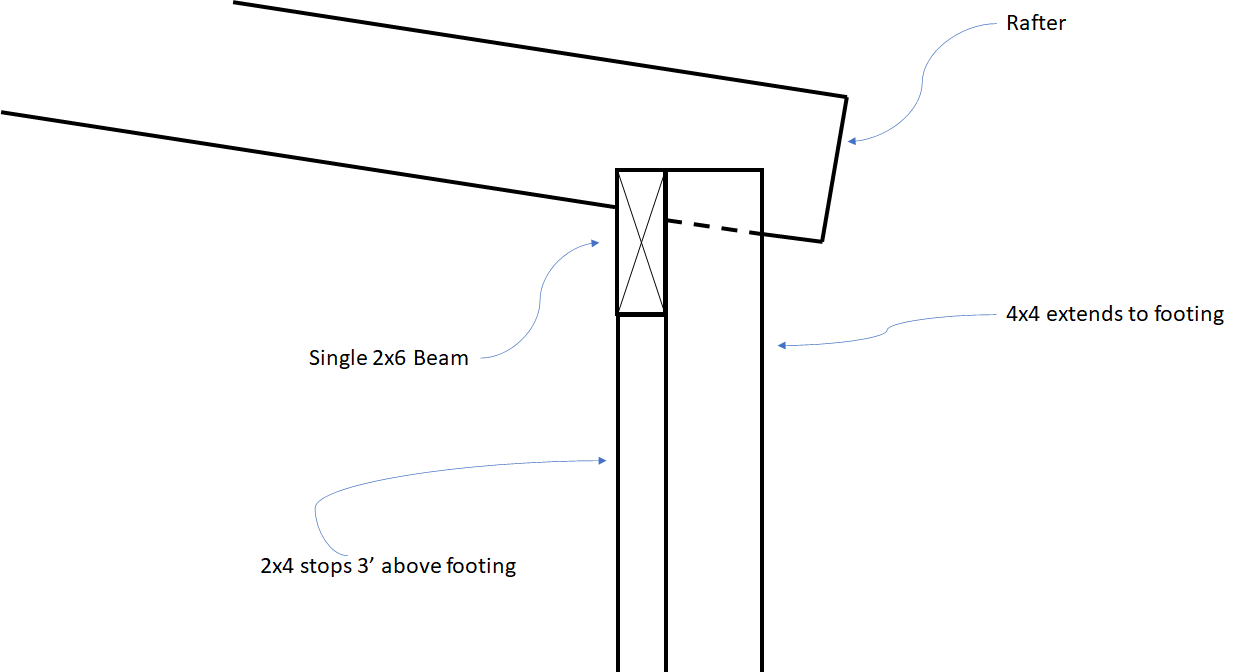 My plan to upgrade this entails digging new, proper footings ( I am in the north east US), replacing the columns with 6x6 posts, and adding an additional 2x6 to double up (laminate?) the existing beam. Like this: 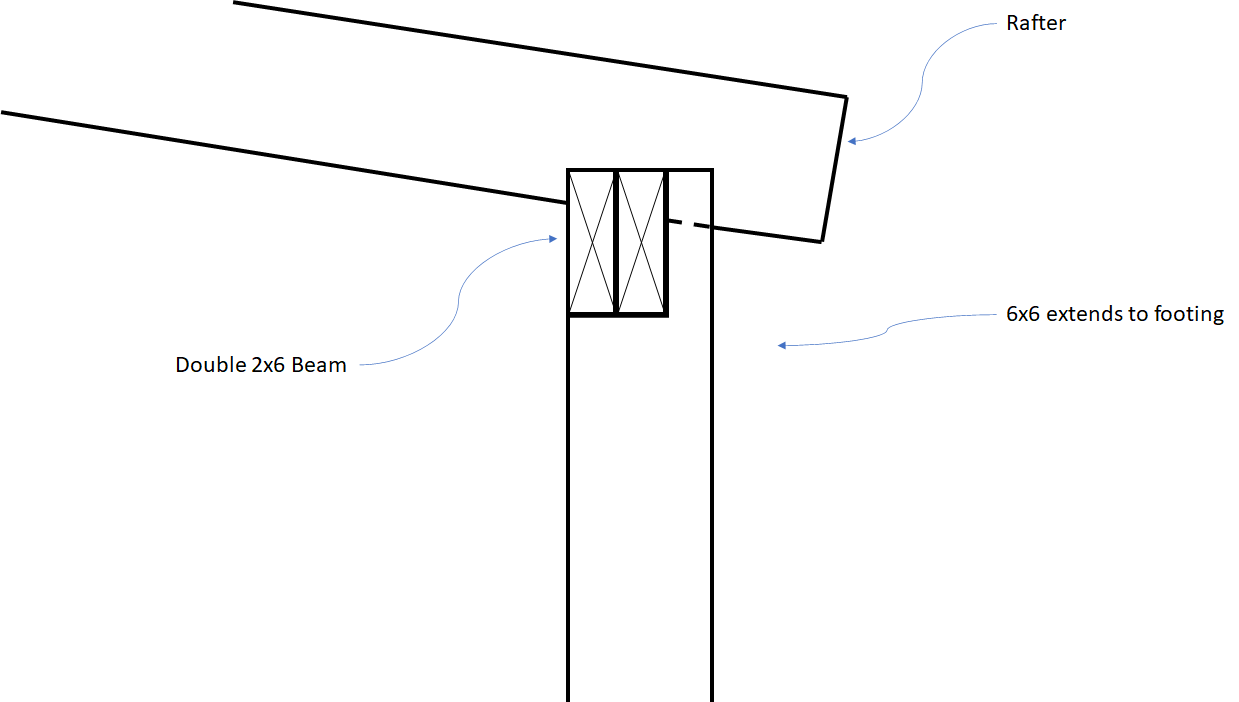 So my question is about attaching the new 2x6 beam to the existing one. All the information I can find online says that the proper way to do this requires a fair amount of nails driven through the boards in both directions. My concern is that all that hammering against the beam in the direction away from the house may cause stress or start to pull the rafters away from the ledger (the roof is currently finished with asphalt shingles on top). Is there any type of screw that might be acceptable to use in this scenario? It seems like driving screws in might be a lot less stress on the structure. Or would a nail gun be better or worse in this case than a hammer?

How about drilling holes and using bolts, washers and nuts? This will be structurally stronger than a million nails driven in from both sides.

borrow or rent a nail gun. they shoot so fast that noting will move.

When talking about structural issues it's always important to work to the rules. Like electricity, this is something that can kill when it's done wrong. If you're worried about a beam, the first thing to do is to figure out how big it should be.

You've told us the rafters are 10 feet between the ledger and beam, 16"OC, and your beams span about 4 feet between support posts. We don't know the snow load requirement, so you must find this information for your area. Once that is known you can find the beam size required by consulting a beam table.

From such a table we find that for No1 grade lumber either a single 2x6 or a single 2x8 should suffice for this, depending on the snow load requirement for your area. You noted 1.5' of snow as a requirement in comments - typically this is given in "PSF" (pounds per square foot) as a standardized measure, however. A single 2x6 is OK for your scenario if code for snow is 30psf or lower in your area. Note that the ground load and roof design loads are different - these tables are for a typical pitched roof. For a steeper roof the snow load goes down, for a flat roof it goes up. Also note that using lower grades of lumber makes a significant difference in the required beam size.

Now, If you intend to construct a built-up beam for an application that requires multiple plies of dimensional lumber there are rules about how the members are fastened together, using specific cross-nailing patterns or structural lags, bolts, or screws.

If you decide on screws, note that most types of general-purpose construction screws are not suitable for structural applications. The required screw for beam building is a listed structural screw with a long shank. 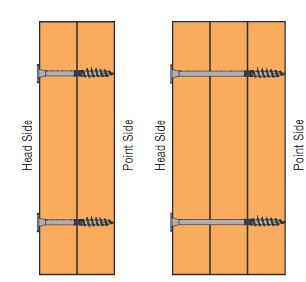 These screws have several features that deck or construction screws do not. Firstly they are listed for structural applications and meet the required shear load, strength, and corrosion requirements for same. Secondly, they are threaded such that the screws only bite into one of the plies in the sandwich, causing the screw to pull the members tightly together when fastened. This clamps the boards together rather than just tacking them together.

This does two things a regular screw does not. First, it loads the screw in tension, where it is strongest, and it maximizes the force between the pieces of wood, allowing them to function as a single unit and preventing them from sliding against each other (in which case the screws would be forced to take up all of the shear load, where they are weakest). Regular screws bite the top board as much as the bottom so they do little to force the boards together and most of the loading is concentrated around the screw head.

For the best strength, ideally you would also apply a good bead of construction adhesive between the plies. When the structure screws pull the two members together this also ensures that the adhesive spreads out as much as possible to produce a stronger, uniform bond over the mating surfaces.

Not the answer you're looking for? Browse other questions tagged framing roof porch or ask your own question.

9
How to attach a 2x beam to the side of a post?
3
How to calculate steel beam and posts size to replace existing wood beam in terrace
4
How should I repair a cracked trough roof beam?
1
How should I connect two beams to a post at a corner?
0
Attach Porch Roof Beam to Side of House
2
Ridge beam sizing for an 8'6" x 20' tiny house
1
Span of roof rafters, how to fix improper structure
0
Fix attached laundry room roof framing
0
Attaching porch roof or pergola to old brick home