I have a dual voltage tig welder I want to wire a circuit for in my garage. The welder will be the only equipment plugged into this.

The welder has a 5-15P plug as shown for 110v operation. What receptacle am I supposed to use that will be safe on this 30a circuit? I am not entirely sure what is correct in this application. Can I use a 5-20r receptacle? I feel like no. 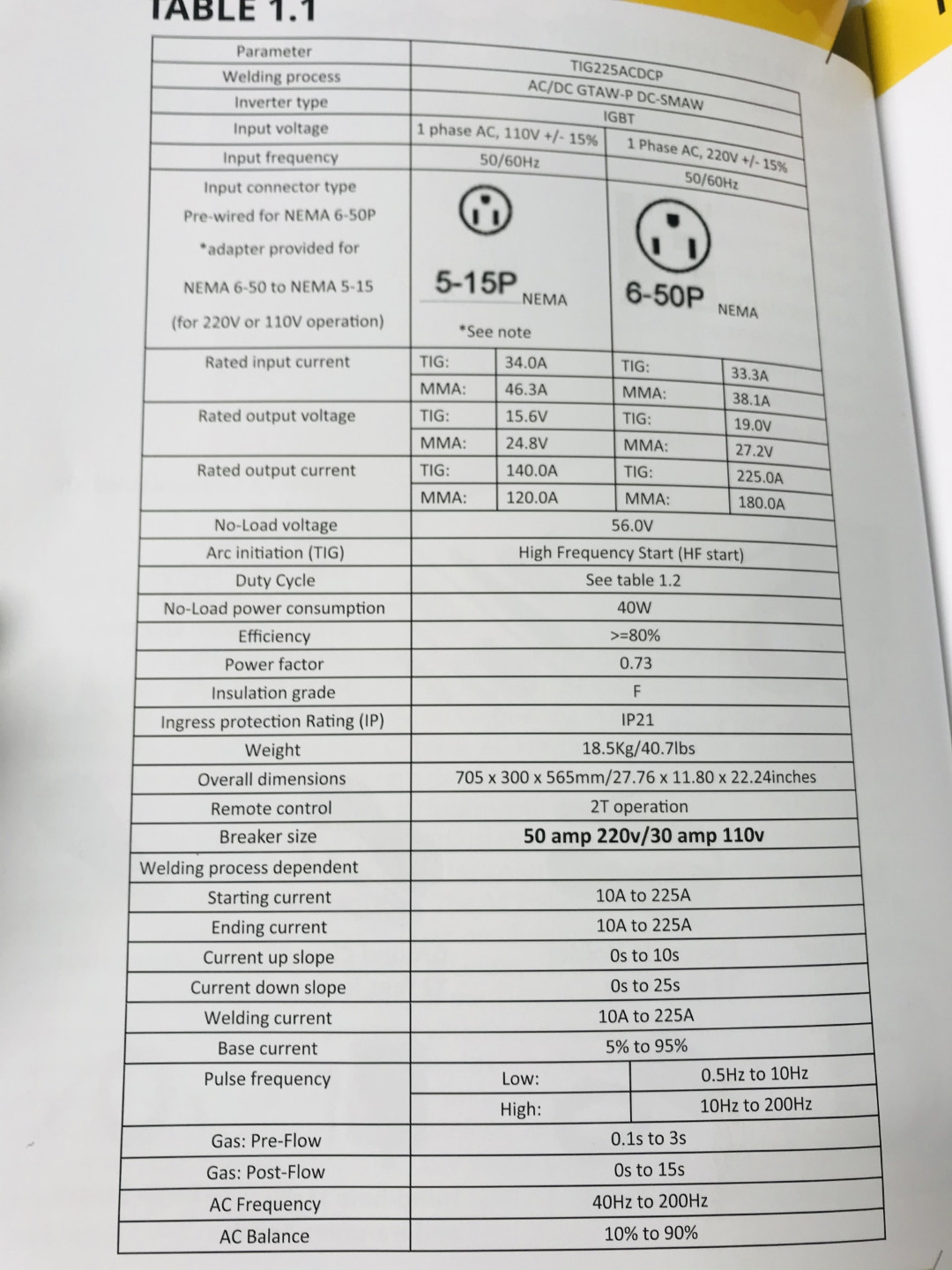 Correct. This welder has given you a real "jack-a-doodle" set of specs that make no sense at all. Running 120V/15A is only there so if you have light jobs, you can get 'em done using existing circuits... if you were wiring in a new circuit just for the welder, you would NEVER run 120V, since 240V is a possibility.

What's more, 30A+ 120V sockets and plugs are exceedingly rare and fairly useless for any other purpose. They are only used for small travel trailers.

So here's what I would do if I were you.

I would use a 30A, 240V breaker. (not least, 30A/120V breakers are rarely used and practically useless. Your local store's stock will be covered in dust.)

I would use 10/3 w/ground cable to bring that out to a NEMA 14-30 receptacle (standard 4-prong dryer plug) and wire that up all proper. (4 wires, neutral and ground separate).

First and foremost, because presence of a 30A+ 240V socket in your garage, adds value to your house. Lots of home buyers these days are looking for electric car charge ports, so seeing that 14-30 ready to go will give you an edge with some buyers.

But also for $3 more in /3 wire instead of /2 wire, and probably $5 savings by buying a more popular socket, you now have plenty of power for the welder. You're gonna have welding problems as you learn, but at least now, you won't have to worry about power being a problem.

If you don't like having to change the welder plug, and still want that "electric vehicle" home equity bump, then do this, instead.

You still get to "count coup" on the electric vehicle capability, since EVSE's don't actually need neutral.

Yes, I know you have other loads in the 40A subpanel. The 40A breaker is allowed because of the really weird provisioning rules NEC has for welders. It gets into lots of complicated stuff about duty cycle. The gist is your hobby welder doesn't actually need a full 40A provisioned to it, but it's allowed to use a 40A breaker and socket because when it's on, it can draw that much.

Also, let's talk about that #8 feeder wire to the garage. We might be able to bump that feeder up to 50A.

Not the answer you're looking for? Browse other questions tagged wiring garage or ask your own question.

11
What wire gauge should I use with a 30 amp breaker for a 220V welder?
1
Can I add a 50 amp breaker for an arc welder?
1
Need help designing a circuit layout and wiring diagram for a garage
1
Detached Garage additional wiring
0
Wiring 50A RV receptacle to 120V service
3
Can I run THHN for separate washer and dryer circuits through the same conduit?
3
Wire for 100 AMP Detached Garage Subpanel. 50 feet direct buried 50 feet in crawl space
0
Can I put the sub-panel for my attached garage in the attic?
3
Sub panel feeder circuit wire sizing
9
Are there safety concerns or code violations with my garage sub-panel?