Solutions for a difficult-to-reach shut-off valve

To access the shut-off valve in my condo, I need to physically enter the crawlspace and squeeze through a knee wall, all the while avoiding ductwork, cables, and other pipes. The photo below is taken from the crawlspace access hatch. The valve is probably about three feet from the opening, so well out of arms' reach.

The condo is rented part of the year, so I would like to make a way to easily shut off water to the whole unit in case of a leak, or if plumbing repairs are needed. I can't expect renters to enter this space and shutoff the water, meaning any leak would last as long is it took a plumber to come out. There is an outdoor shutoff, but it's under a sealed manhole cover in a row of unlabeled shutoffs for the other units.

Would any of these ideas work? Are there others I'm not considering? 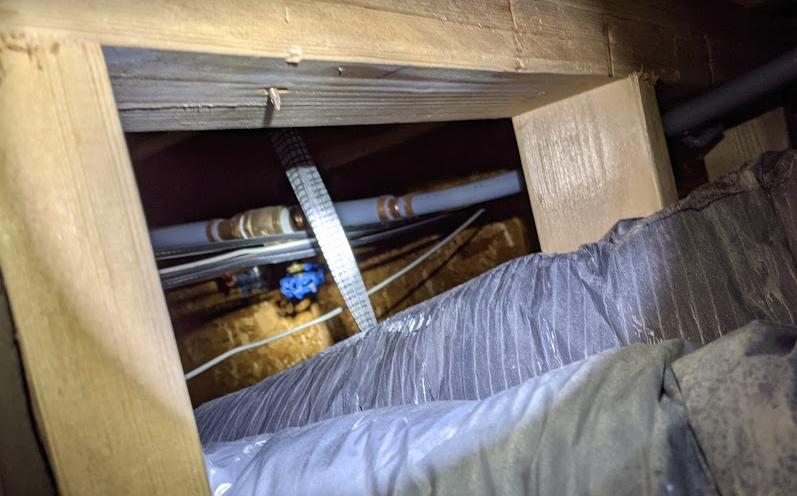 You do not have to have the water utility shut off the water for option 2.

Turn off the valve, cut into the line on the house side of the existing valve, (not the city supply side). Add your elbows, piping and a 1/4 turn valve, then tie it back in to the line. Open the first valve and then your new 1/4 turn valve and you are good.

I actually have a similar situation with a vacation house in the mountains (the crawlspace is less bad, but to get to it, you have to go down a really steep hill to get access, which sucks in the snow, ice, or rain).

I looked into electrically controlled valves. The problem is that most of them are either normally open or normally closed. (ie, they stay in one state, and then require power draw to go into the other state).

I did manage to find one that didn't require power except when changing states, the ELK-WSV2. But I never ended up getting one. The website that I had bookmarked it no longer has it, and it looks to be over $400 online currently.

Instead, I got a curb key (under $20), and started shutting off the water at the street for the year or so. (although, as a condo, that might not work for you, if it would also shut off your neighbors).

(but then I had a really wet summer, and the sump with the water shut off was all murky water, and I spent more than an hour trying to feel for the valve to turn. I've since gone to your #3, with an easy to reach shut off right where the water comes up into the house.)

This makes it so that should a pipe burst, the damage should be limited to the crawlspace, and not the living space.

update: I should've also mentioned. This Old House had a segment on "smart water shutoff valves" about a year or so ago. Lowes has one from StreamLabs for $600. It might be easier than wiring up control circuits like for the ELK-WSV2, as it shuts off automatically, and can be monitored wirelessly.

5
The main water valve won't open fully after I closed it. How do I shut off the water to replace it?
2
Why is my main water supply shut off valve leaking even while closed?
2
Name of metal tube for water shutoff access
0
Toilet tank fills after Shutoff valve is off and FluidMaster fill valve also is off
1
What threading type is my ice maker shut off valve?
0
Water began flowing from some taps even with whole house shut off
0
Shut off valve for 2 refrigerator supply lines