Rigidity (and height) of drywall around outlet hole

We are dealing with a subpar contractor who has tried multiple times now to repair a small section of subway tile that they previously cracked. I suspect that their current strategy is going to lead to more of the same (poorly supported tile prone to cracking) and I would like to verify this suspicion before putting my foot down in what I request of them.

In the image you can see the current strategy. The drywall "bridge" which is in place between the studs has very little height around the J-Box (less than 1/2" on the bottom), meaning it is very non-rigid. Here is a video of my pushing on it (too large to host on this site). You can also see how poorly that drywall bridge lines up depth-wise with the backs of the other tiles which are in place. It's also worth noting that the tops of most of the tiles below the drywall bridge can be wiggled in place noticeably. I suspect that in the future these tiles will be prone to cracking, as well as any tiles which are installed over this shoddy bridge. As well as all of the grout lines involved, if the tiles themselves somehow manage to hold.

Assuming my thoughts above are correct, I presume the best course of action is to request more tiles be removed above/below the outlet to allow a better drywall bridge to be installed, one which has taller strips surrounding the outlet (compared to the flimsy 1/2" currently below it). But how tall is tall enough?

I'm inclined to just ask for a 16" square drywall bridge, which would give a solid 6" above and below the outlet hole. Is this reasonable? 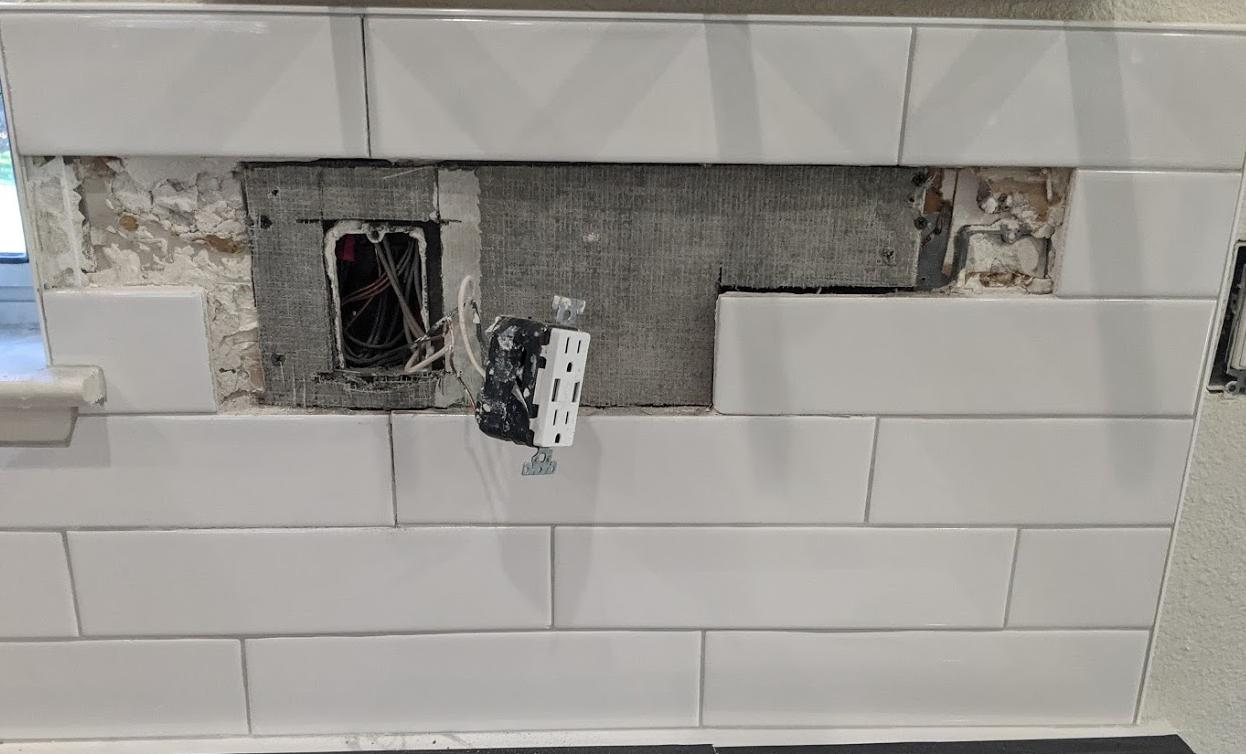 Good to be proactive and catch this before the tile goes up. Obvious problems I see are that the drywall is poorly cut (can take it out and trace it to re-cut a matching piece without gaps or overcut at almost no cost so easily fixed). Any of a drywall cutout tool, a Dremel, a keyhole saw, a hacksaw blade or a drill with a side cut bit can cut the piece without so many obvious flaws. Sloppy cuts like that are no issue on properly backed board, but a repair justifies greater diligence. If he's being dodgy about fixing such an obvious problem, he may just need an idea of how to do the fix at a reasonable cost.

The rigidity problem won't be fully solved by the above, but it is still very easy to solve. You have a very significant size workable hole there, so it shouldn't be a problem to add backing wood verticals to support the drywall. You probably don't want to remove more tile and trying to screw to the studs inside the wall would be exceeingly awkward, but you can get some 1"x1" pieces of wood, figure out what the longest one you can get through the hole is, cut it and hold it up inside the wall to see if it's long enough to bridge the taller gap with enough overlap to glue to the inside of the drywall above and below. If it's not long enough, you can put two pieces in the wall and then screw them together with a 4" overlap to make one long piece. Make sure you drop all the pieces you need in the wall before you start screwing together or gluing in pieces that might block the opening. Finally, you can cut blocks to fill the space between the backing boards and the back wall and glue, screw and/or wedge those in place. Consider overkill using heavy duty adhesive like PL400. By the time you're done the result should be as permanent and rigid as the rest of the wall. Cost will be quite low compared to cost of re-doing tile an infinite number of times.

Especially if you use high strength adhesive like PL products, prep everything first, clean the inside of the drywall of dust and read the instructions, as some of these products set quite fast.

As far as the depth problem, that should not be a significant issue for an experienced tilesetter or mason unless it is quite significantly proud, but to me it looks inset and since the drywall needs to be re-set anyway it would be easy to shim it flush.

Bashing out more tile, even just enough to install a horizontal backing board would also work, and the 16" tall piece of drywall you're asking about would function too, but it will still have some flex unless you add backing. You would have to take out 9 tiles including a special cut and really all you want is a normal strength wall and it probably won't break your heart if it has a few extra boards hidden in it.

You should also consider cement board vice drywall. Cement board is stiffer and is preferred for anywhere that can get wet. In this case doing one small area does matter but the stiffer part will help.

Not the answer you're looking for? Browse other questions tagged drywall receptacle tile junction-box or ask your own question.

2
How can I remove the tile from this wall?
2
How do I patch my wall with tile along the seam?
1
What do I do if drywall screws won't penetrate the studs?
2
How can I mount outlets securely where drywall was cut from around outlet ears?
0
Bowed Wall / Running Corners: Help Me Tackle Getting Studs in Plane
1
Delineation between drywall and cementboard
0
Can I tile over a horizontal band of tiles in my shower?
12
Expedient repair for water damaged drywall behind tile
0
Outlet box between shallow and standard?
6
What could cause the drywall behind the baseboard to crumble and allow interior of wall to fill with dirt?