Will old anchor holes in a concrete slab reduce its useful life?

An impaired driver jumped my curb and ripped my square mail post out of the sidewalk concrete that it was anchored into. The bolts were all ripped out of the concrete. Bolts went through the metal plate into concrete, so when the post and anchor went, so did the bolts. I think a couple bolt grippers may still be in there.

I can get the same metal post anchor replacement so the holes will align and fit if I clean them out and work them a bit. All surrounding concrete damage is from the incident.

Is some repair going to hold long-term, like some concrete "caulk" and using the same holes? Or is it an eventual fatal wound, such as the holes will get bigger and start cracking around them?

Since water has gotten into them, will that cause any structural problems? Or will it eventually require the whole concrete sidewalk square (~3'x3') to be replaced, re-poured completely, to get it back to the condition it was in before? 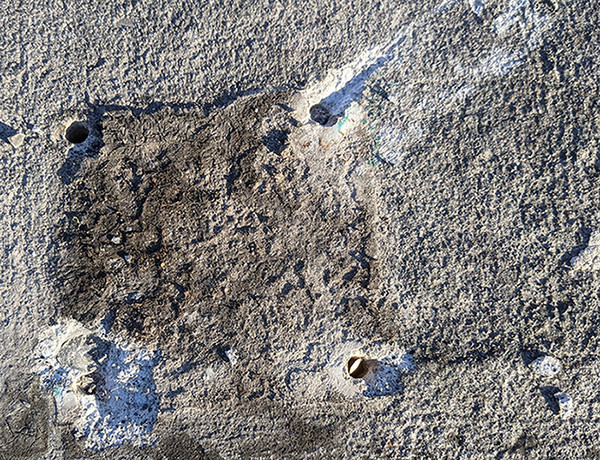 Also want to clarify the sidewalk is slightly damaged. The surface streaks and has chips around it. If I drill new hole offset from old, will the old holes start to crack the concrete around them?

This isn't a legal forum but it is pertinent to know the driver had no insurance and he is in jail for the hit and run. He's being prosecuted by the city and I can get restitution from him. I won't have to sue in small claims. The point being, he'll be the one eventually reimbursing, but I have to justify a repour or if a repair is reasonable enough. My home insurance has a $500 deductible and will raise my rate so that's a no-go.

The concrete looks intact enough for re-use, I can't see if the anchor bolts are good or not, if they can't be reused getting old anchors out of concrete can be tricky: you might have to move your letter box one inch to the side so that new anchors can be drilled into virgin concrete.

If you do move it don't leave the old anchors protruding they are a trip hazard, if the can't be pulled out use an angle grinder to cut them and grind them flush.

If you wanted to keep the post centered in it's current location, you could rotate the post 45 degrees and re-drill in place. You might not even need to do anything to the old bolts, as it's unlikely to be a tripping hazard so close to the post. You'd probably have to add a plywood mount at the top to rotate the mailbox back to perpendicular to the street, but it's not like it needs to bear a lot of weight.

One thing that might work well is to get some hard rapid-set mortar (they make them in smaller packages for patch jobs like this). The old bolts can be drilled out of their holes (use a metal-drilling the diameter of the shaft), then you can get a new mailbox and concrete the holes before adding new bolts.

Inspect the anchors a little more closely. If they're the drive-in wedge type similar to the RED HEAD brand shown here (photo credit to Grainger), and if the installation hole was drilled clear through the concrete, then you may be able to simply drive them down into the soil below with the help of a hammer and dowel (a piece of rebar, a long bolt, etc). That would clear the way for new anchors to be installed in the same holes, with or without re-drilling.

If the holes aren't in suitable condition for re-use as-is there are epoxy-based concrete anchor systems as well.

If all else fails: a 3 foot square patch of concrete is not all that big. It could be broken out and completely replaced, giving you freedom to mount the new mailbox how and where you wish.

In my opinion it's easiest to just demo out the concrete patch and repour and set new anchor bolts. Least labor, best look, best structure. You could even consider adding some colorant to the new cement for a new look.

I'm not sure if you changed your picture, but it appears there are no existing bolts or studs to worry about. If that's the case, one option is to clean the existing holes, then use the same size hammer drill to deepen the holes so you have a good 3-4" of good clean hole. Then use anchoring epoxy to anchor fresh all thread rod in the holes. Once you clean the holes and have the rods in place in the epoxy, you can bolt them to a pre-drilled board to make sure they stay straight and in the correct pattern until the epoxy cures. Once the epoxy has cured, remove the placement jig, patch the concrete chips and re - mount the mailbox.

Is it possible to hammer the bolts out on the backside of the concrete plate ? by use of a sledge hammer. The you can just use new bolts in the same holes - maybe you have to use some 2-comp epoxy. If not then drill the top 2 inches away - starting with 6 mm and then drill again with diameter like the. It will cost you a drill or two (metal and concrete around) Fill holes Make new holes 2 inch away from the old ones

Not the answer you're looking for? Browse other questions tagged concrete replacement hole-repair mailbox sidewalk or ask your own question.

1
how to repair holes left by expanding anchor bolts in concrete
4
Installing a strong-tie post anchor on unlevel concrete
1
Wood posts: install on concrete slab OR dig hole and bury them?
0
Can I add concrete from the old posts in the holes for the new posts and pour fast setting concrete on top?
0
How do I attach a wooden post to existing concrete steps?
0
Anchoring Aluminum Pergola To Paver Patio
0
Shallow mailbox post hole
1
Foundation vent grates
0
Do I need an impact driver for driving concrete screws?
1
Fill and redrill curtain holes (concrete ceiling)