Ask Question
Asked 9 months ago
Active 9 months ago
Viewed 68 times
1
Closed. This question is off-topic. It is not currently accepting answers.

Which would be better for the longevity of my snow blower and why?

Most engines have several weights of oil that are allowed, typically with one of them being the recommended weight. In addition, outside temperature affects which oil weights can be used. Most manuals will have a chart with temperature ranges for each oil weight.

My Toro snowblower lists 10W30 and 5W30 with the following temperature chart: 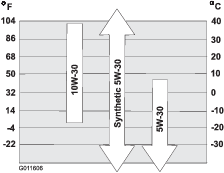 I'm sure your snowblower's manual would list all oil weights that are allowed. I would suggest following the manual rather than some generic advice.

Not the answer you're looking for? Browse other questions tagged maintenance motor or ask your own question.

12
How do I handle significant snow and ice dams on a 4/12 gable roof with ridge vents?
2
How long can a fireplace go without cleaning/inspection if it's never used?
0
How do I maintain a newly laid oiled floor?
1
What annual maintenance does a dishwasher require?
3
Why is my furnace leaking, and what is it leaking?
1
Should a chainsaw go dull so quickly?
2
Changing blower motors with different wiring schemes
0
Blower motor compatibility