Old Subpanel with 3-wire Feed, with Neutrals and Grounds Bonded Together, but With Metallic Path Between Structures – Wrong or Not

I own a home with a main panel on the corner of the house and a subpanel in the garage that is sort of separate and sort of attached in that the two structures are connected by an outside wall, like this cartoon I drew up: 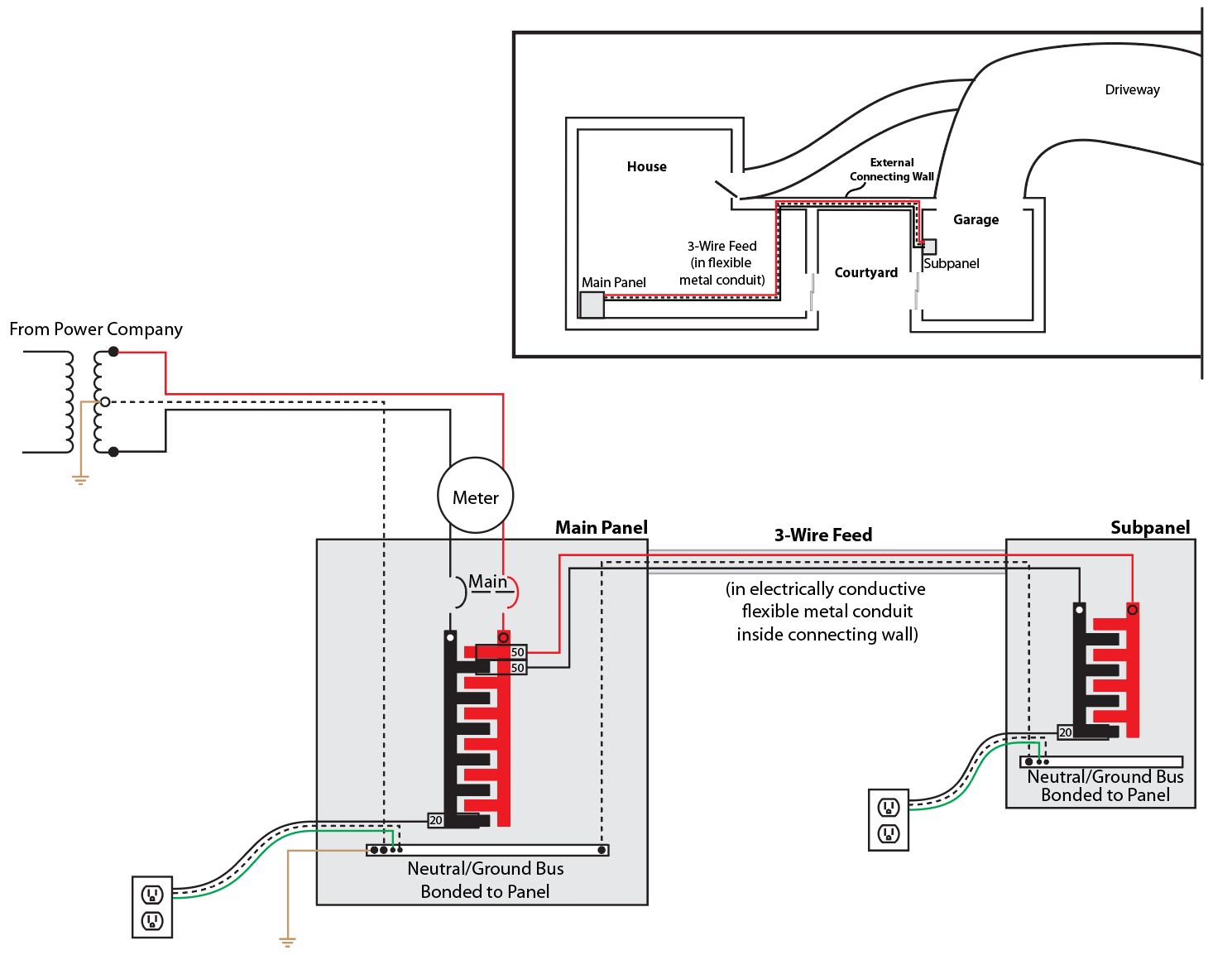 Edit: The connecting wall is about 8' tall, built from 2x4 studs on a sill plate bolted to a concrete base that runs between the house and the garage. The flexible metal conduit was guided through holes in the studs. Both sides are covered with vertical tongue and groove siding like other exterior walls on this old house, and the top is capped. From the front door side, it appears like the garage is attached to the house and the two are one structure. From the courtyard side, the garage feels decidedly detached, except for the wall

I am looking to add a new circuit to the subpanel to power a 12-volt transformer for some low voltage lighting. While looking into this, I investigated the subpanel wiring and discovered that the white neutrals and green equipment grounding conductors (EGCs) are visibly bonded together.

At first, this seemed contrary to what I keep reading, i.e. that neutral current carrying conductors and EGCs should ONLY be bonded together in the main service panel and never in a subpanel. Then I found folks explaining that prior to 2008, the NEC allowed/required neutrals and EGCs to be bonded together in a subpanel if the subpanel is powered by a 3-wire feed (white, black, and red, but no EGC wire), AND if there are no metallic paths between the two structures.

Well, from what I can tell, I have a 3-wire feed, but my concern is that I also have a very solid metallic path between the two structures, i.e. the flexible metallic conduit that brings the 3-wire feed to the subpanel.

With the main breaker off at the main panel, I checked electrical continuity between the neutral/ground bus in the subpanel and the exterior of the metal conduit and between a grounded outlet within the house. Both checks showed continuity.

I’m going to have a professional electrician look at it in a couple of weeks, but wanted to understand it more first.

My concern is that anytime we use something in the garage, lights, tablesaw, or whatever, then some of the return current traveling on the neutral wire while out in the in the garage finds a nice, juicy additional path back to the main service panel when it reaches the bonding point in the subpanel, i.e. via the entire grounding system of the house. It’s been like this for many years with no ill effect, but it still seems potentially (pun intended) unsafe.

I don't want to make it compliant with current NEC as that seems like overkill. But, I'm concerned that the subpanel wasn't even compliant with the "old NEC" and, if so, would simply like to get it improved to that limited point.

I am specifically concerned about "objectionable current" being injected onto the EGC conductors between the subpanel and the service entrance panel.

Am I being silly or outright wrong to worry about this? If not, is the fix to isolate the metal conduit from the subpanel, say by replacing the conductive connector that binds it to the subpanel with an insulating connector? Or perhaps the fix is to put the neutrals and EGC wires on separate bars in the subpanel and rely on the FMC as the EGC path back to the service entrance panel?

Thanks for your thoughts and explanations! Just trying to learn…

The gauge of the 3-wire feed is unclear to me. It consists of seven copper conductors. Including the insulation jacket, it has an OD of about 0.315". Here's a photo in case you can tell: 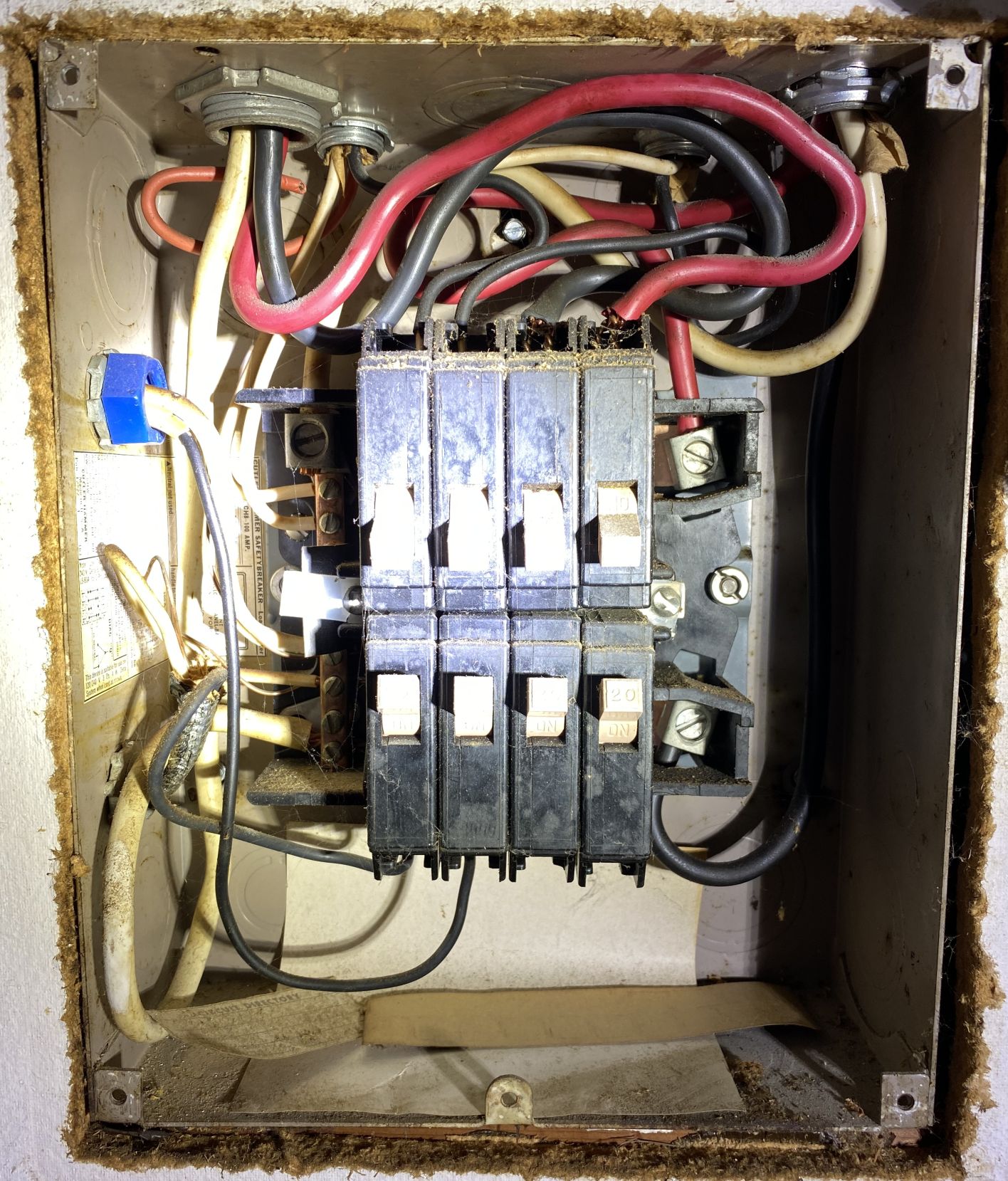 The apparent purpose of the connecting wall is to provide privacy for the courtyard (the house has a bedroom and bathroom that face the courtyard) and, perhaps, to provide a non-buried way to carry power over to the subpanel. There is no cover over the courtyard.

The home was built in 1921, making it a century old this year which is pretty old by California standards. It was extensively remodeled in the 1960s when, I believe, among other things, the garage was created by enclosing a covered carport, the connecting wall was built, and the subpanel was added.

You are in pretty good shape here. The metal conduit can serve as the grounding connection to the main panel, but having the neutrals and ground bonded in the sub-panel is a no-no. It's not a hard fix. Just move all the grounds to a bus bar attached to the panel (You may have to buy one and install it), and remove any bonding from the neutral to ground.

I'm not sure if the wall connecting the garage and house would make it be considered "one structure". If it is "one structure" you don't need additional grounding. If not and you really wanted to play it safe, install a couple of ground rods for the garage and connect them to your ground bus in the sub panel.

3
Grounding requirements for main panel and subpanel
3
Grounding subpanels located ~100ft from main breaker
2
Powering Subpanel from CSED via Feed-Through Lugs
0
Do I bond ground and neutral for a feed from a disconnect?
1
GFCI in a 3-wire sub panel with bonded neutral and ground
1
Have four-conductor feed at detached garage subpanel, how to verify the ground?
2
Sizing Ground wire for 200AFeeder to House
3
Is conduit required when running a short distance to an adjacent 60 amp subpanel?
2
Was FMC >6ft Ever an Acceptable Grounding Path?
3
Do I need a ground rod in addition to a pipe? Subpanel in separate structure