We're getting ready to replace/expand the decks on our house. I'm having plans done and have seen a draft but wanted to educate myself a little while I wait. The draft didn't yet contain sufficient details for the connections I'm asking about here.

Our deck is two stories, where the 2nd story is about half the size of the 1st. There will also be a roof over the upper level. My question is specific to the support posts/columns between the ground and roof (Circled in red and blue in the image). The draft plans showed a 6x6 on concrete base to lower deck, triple 2x10 beam supporting lower deck, 6x6 post to upper deck, triple 2x10 beam supporting upper deck, post to roof, triple 2x8 beam supporting roof. The connections at the roof (in blue on the image) are different in that there's another triple 2x8 connecting there that goes back to the house roof, so perpendicular to the beam visible in the image. How should these post/beam/post connections be made?

Another possibility might be to use continuous columns and beam hangers, something like Simpson HUC. The columns would be nearly 20' long though and so not exactly easy to work with. 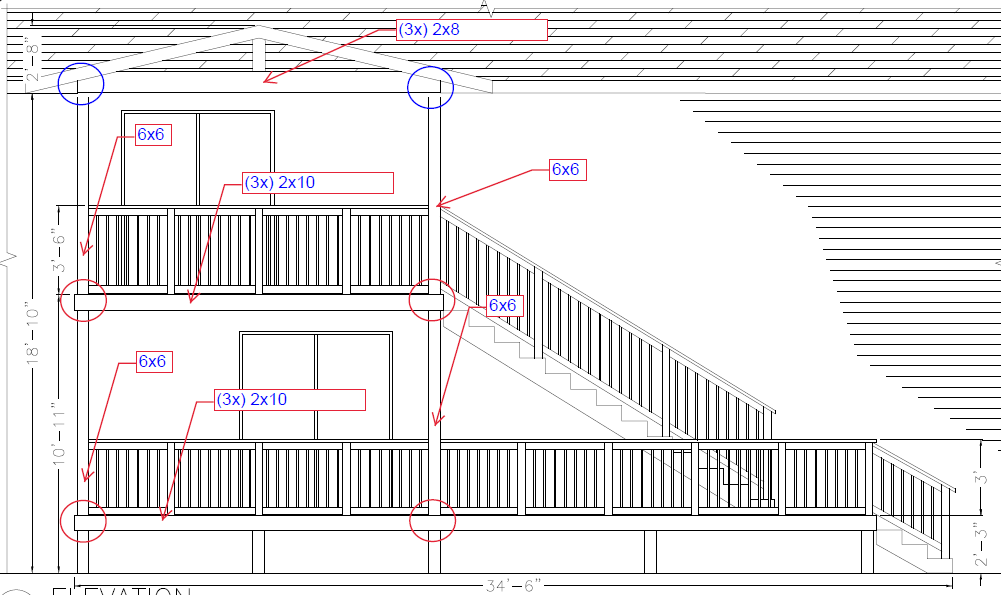 The usual length of 6x6 pressure-treated timber is 12', though you can get up to 24' (or longer) through special order, there is a rare need for that.

Technology around wood connectors has evolved and advanced rapidly, for your personal information use, I suggest visiting the "Simpson Strong-ties" website, to find the available hardware, cost, and uses. https://www.strongtie.com/

Not the answer you're looking for? Browse other questions tagged deck beam post connectors column or ask your own question.

1
Understanding deck spans for beams.
1
Can I frame over an existing deck with a new deck to raise the level?
1
How can I attach angled beams to a post?
0
Post and Beam sizing for 10x10 shed workshop?
1
Please help - wonky post location on pergola - concerned with shearing and stability
3
Is there code compliant way to attach deck joists below a deck beam (or at least lower than flush with the top of the beam)?
8
Can I support 6x6" deck posts on 10" diameter poured concrete footings?
1
Attaching double 2x10 beams to 4x4 post
1
Help replacing a rotted roof overhang support post