How would one solve this tub-length issue?

We have a 1 3/4" bath situation in our house. Like many 1970's ranch style homes, the floorplan's master has only a single vanity, toilet, and shower. The guest bathroom, which is attached to one of the bedrooms, has a tub (likely because that's where the kids would be.)

The original floorplan design called for 3 bedrooms. Ours is actually two, where the "master" is actually smaller than the space that's opened up by removing the partitioning wall that made the 2nd, and 3rd bedrooms. So, in short, our master is not really a master, and the 2 bedrooms that are now one serve as the master for us. Consequently, it is where the full bath is and we don't need a bathtub in the master bath. To complicate things, that makes our master bathroom the guest bathroom when we entertain. Bleh.

Knowing all of that, we were considering swapping moving the tub to the "master" and the shower to where the bath is.

For the current bathtub location, we can simply adapt by installing a linear drain with a curb-less shower. For the new location, the drain is off the walls by about 13", so we'll need to either re-plumb, or elevate the tub and run the pipes under.

Where the tub is going, we have studs on the faucet end, and block wall on the opposite end. The distance from the block wall to the stud is 61". We need to insulate the block wall with 1" foam and then add 3/4" furring strips for the drywall, and then 1/2" X 2 backer board or drywall.

Would it make sense to put a 54" tub in this space? If so, what would I do to frame out that anomaly and not have it look like garbage?

The wall will be tiled above the bath. 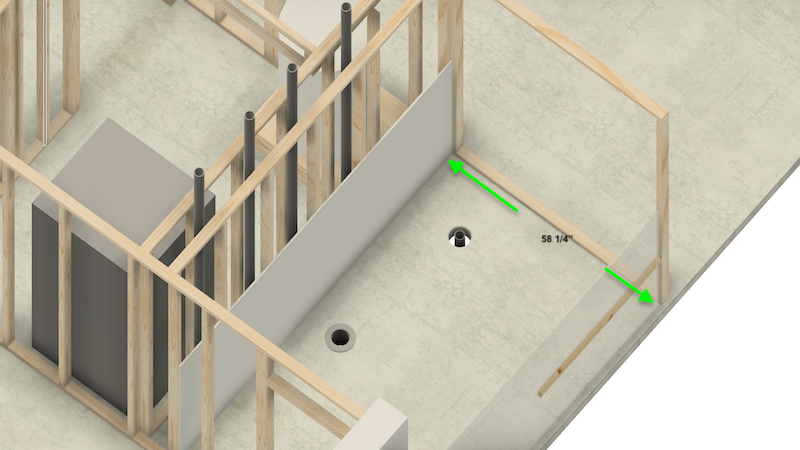 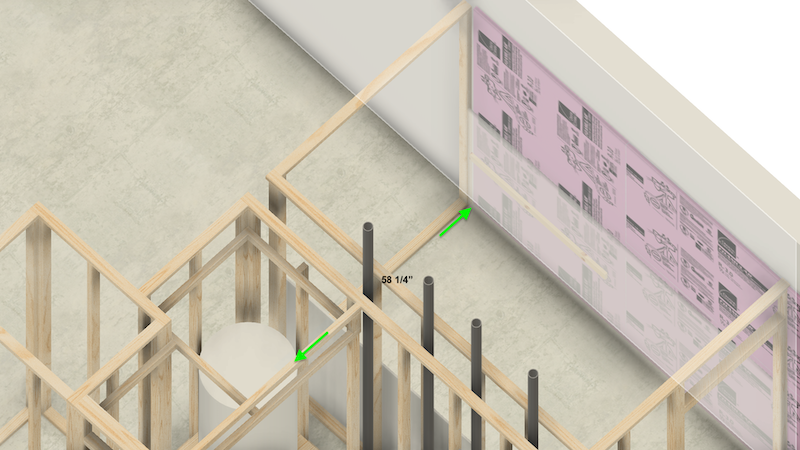 First thing I'd do is challenge whether the wall finish stack-up you described is actually required.

Could furring strips or hat channel be embedded in the same plane as the XPS foam? If so there's no loss of dimension due to the furring strips. Are furring strips even needed? Could the subsequent layer of drywall or backer board be held by adhesive, or by screws through the foam into the block wall?

Why two layers of drywall or backer board? Would one layer suffice? What about a thinner alternative such as Schluter's KERDI membrane? (I've never used that product; it's just an example that caught my eye.)

Also: the water-shedding layer in the wall could (should?) go in front of the flange of the tub. When placed there you don't have to allow space for this layer in the rough-in sizing.

If you do go with the 54" tub and need to make up 4 inches somewhere you're going to have to just build a box. It can be completely invisible if you make the box the entire width of the room, ie make the whole room 54" wide. But maybe there's a way to avoid that and also make the space useful. For example, frame a built-in shower bench opposite from the faucet.

If the the 4" build-out box extends wider than the width of the tub by one or two stud bays then that 4" plus the 3.5" depth of the existing wall could be turned into a built-in storage space. It's kind of shallow, but.. it could easily fit rolls of toilet paper, feminine supplies, cleaning products.. a whole lot of rubber ducks (Youtube, James Veitch Is A Terrible Roommate)..or hide-away towel racks, maybe?

Not the answer you're looking for? Browse other questions tagged bathtub remodeling or ask your own question.

4
How to reattach a tub overflow pipe that is offset from the tub
0
Manufactured home bathtub/shower wall installation
5
Can a freestanding bathtub drain be damaged by regular use?
0
Running water in master shower causes guest bathtub spigot to drip
1
how to deal with tub drain smell?
0
Will my floor support our bathroom remodel?
0
Caulking bathtub, is there supposed to be a hole?
0
Can I remove the bathtub -- just the tub -- without shutting off the water supply?
1
Want to install Japanese style unit bath/bathtub. Trimming a joist a bad idea?