13ft wide desk/workbench with only one leg

This question is much like: how to "float" a large desk (3000mm x 720mm x 40mm) between walls but somewhat different (mainly, significantly wider).

I want to build a desk that is 13ft wide, supported by cleats (lagged to wall studs) at the back edge and at the ends. I don't want to try to make the top stiff enough that NO support is needed along the front edge (the "torsion box" described in other questions). I simply want to reinforce the front edge with a piece of steel angle (already in hand), and perhaps some additional wood, and support that in the middle with a single strong leg (in order to have as much clearance as possible under the desk).

The top will be made from two pieces of 3/4" furniture-grade (hardwood) plywood. I'll cut some curves into the front edge, to make two somewhat separated work spaces. (Cutting those curves smoothly enough to allow applying edge-banding is probably beyond my skill level, but I have a carpenter friend who can easily do it in his workshop). It'll look something like this: 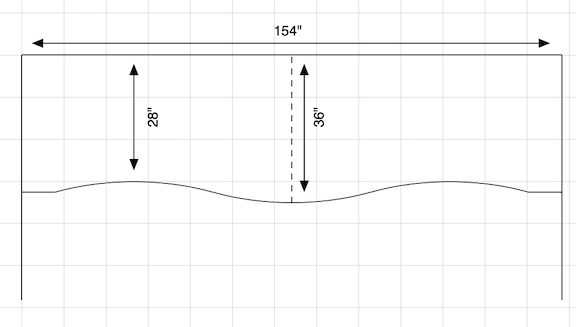 My question is about how to support the front edge. Is simply bolting my piece of steel angle (2 x 2 x 1/4" by 7ft long) to the underside of the top, near the front edge, and supporting the center of that angle with one leg, sufficient ? If I think of the two ends of the angle (from either side of the leg) as cantilevered beams of 42" length, a 100lb point load at the end gives about 1/4" maximum deflection; that's a bit more load that leaning hard on the edge of the desk with both elbows, and it doesn't include the rigidity of the plywood itself, so I think I can live with that. (I realize the entire 84" of steel can rotate slightly off the top of the leg, so modeling it as two separate 42" cantilevers isn't that accurate, but hopefully in the ballpark).

Then there's the deflection of the unsupported section of plywood between the end of the steel angle and the end wall, about 35". I'd like to compute the deflection of a point load (let's say 100lb again) at the center of that 35" span of plywood, but I'm not sure how to compute that (nor the shear on the plywood). So perhaps some extra wood support along the front edge would be in order. This shows a 2x8 board near the front edge. It would be laid flat (even a 2x4, in the normal joist configuration, would provide too much obstruction under the desktop). 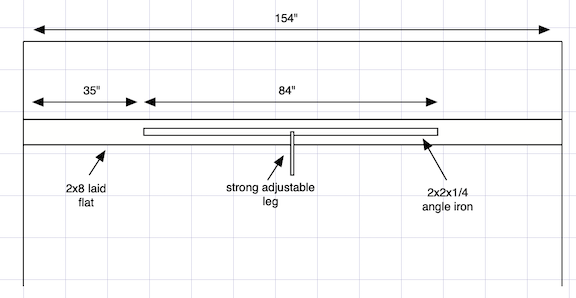 Another idea was to make the desktop two layers thick, with the base layer made from 3 pieces ripped from a sheet of BC plywood. It has the added advantage of supporting the top layer between the back wall and the front edge, although I doubt that is needed. It would look something like this: 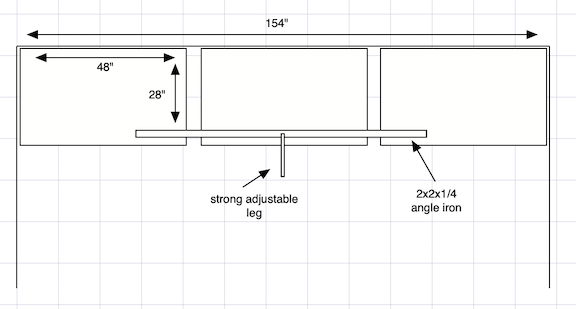 So, which of these three ideas for supporting the front edge of the desk is best ?

Also, for appearance sake, the front (curved) edge of the furniture-grade top will hang off whatever support is underneath it (option 1, 2, or 3 above) perhaps 2" where the desktop is only 28" deep and 10" where it is 36" deep. I wonder if that it too much cantilever of the desktop ? Do I need to bring the support 28" out from the wall (won't look so good) and/or reduce the depth of the curvature of the front edge to 6" instead of 8" ?

Attach the angle to the plywood and put the 2x8 behind the angle where it doesn't use up any extra height. you can screw through the vertical part of the angle into the edge of the 2x8.

put extra plywood under the seam where there is not already angle or 2x8.

Not the answer you're looking for? Browse other questions tagged furniture wooden-furniture plywood steel or ask your own question.