How can I get a bolt with no head out of my wall?

I tried to screw this bolt into a stud to secure a 2x4. The hex head snapped off, and now the bolt is stuck. I managed to slide off the 2x4, but I have no idea how to extract the bolt. IIRC it's a 6" long, 1/4" wide bolt with about 5 inches in the wall.

Looking around on the internet, it seems like I can't get it out without arc welding a new nut onto the bolt. I don't have the equipment or experience to pull that off. Are there any alternative methods that would be more within reach for a novice like myself? 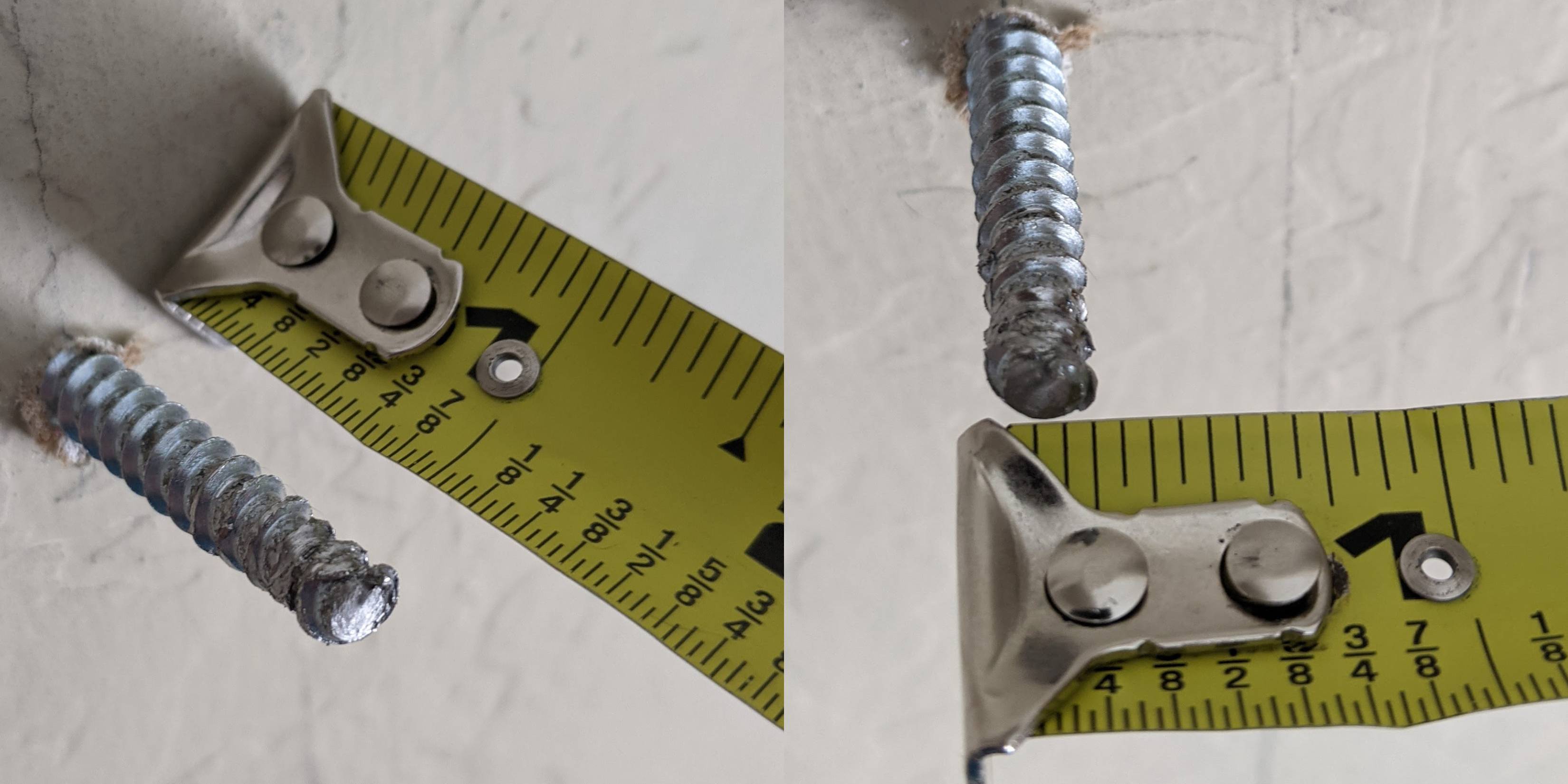 I would just clamp my drill's chuck on that puppy and spin it out.

This is a job for vise grips. What I would do is file the bolt flat on two sides. Don't take off so much that you significantly compromise its strength - just flatten the threads. These flat sides will enable you to grip it with a pair of large vise grips. That should provide sufficient leverage to remove the bolt. Take it a bit at a time. 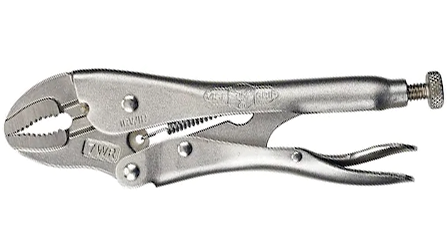 Say you try one of the other proposed approaches in the other answers and the screw is just stubborn and more of the shaft keeps snapping off...

Consider that you might not need to remove the screw at all. In a worst case, you can almost always snap off the screw close to the base of the wall (maybe a little grinding with a rotary tool like a Dremel to fully bury the head) and patch over it with some drywall joint compound like you would do for a screw hole anyway.

Another possible strategy; if you can get 2 nuts onto the threaded bar and turn them against each other they will practically lock into each other, this should allow you then to use a regular spanner, shifter or vice grips to loosen and remove the bolt. Make sure your only turning the first nut and not the second or the effect is lost. If you have it a little thread lock on the nuts might help too.

Some of the other answers are worth trying but IMO a 1/4" lag bolt embedded 5 inches in wood, presumably without a pilot hole, and tightened to the point the head broke off is not coming out with any reasonable effort. I'd saw it off and work around it .... 2 minutes of relatively little effort.

Use a plumber wrench. In general more force and better fit jaws for the task than vise grips: 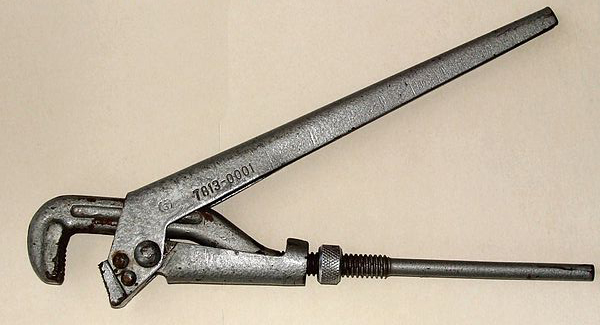 Edit upon comment by jay613: Since it's 5" wood. Drill a hole next to the screw, file the screw and then use the wrench. Or save the money by not buying the wrench and go for the answer by jay613 (saw or drill several holes). I also found out that it may be easier to find the original design of the plumber wrench by searching on Swedish wrench.

Edit 2: Minimum damage to the wall may be to drill a hole along the screw and use the wrench. Welding a nut may weaken the screw and it will break again.

TL;DR: Other options (described below) include:

I second the vice grip solutions (definitely simple with a good success rate, and my preferred approach) -- as well as the welding technique you mentioned (not generally accessible though), but here's a few other "tricks" I've used in similar situations that can sometimes be easier than the vice grips, especially if you have a socket wrench, power drill, or impact driver to help you out, or if you don't have vice grips.

(Btw: You're not going to find nuts to fit perfectly on this bolt, but, I've mentioned nut-based techniques anyways as a general technique for other similar situations.)

If all you have is a drill (or an impact driver with a collet chuck):

Just chuck the bolt directly into your drill. Tighten the chuck down real good and try to unscrew it.

It can be hard on the chuck, especially if you've got the bolt in there slightly off-axis, but, with a decent tool you can generally get away with this every once in a while with no harm done. It can be your dark little secret.

If the threads cause problems here and you've got a way to grind or sand them off, you could take them down a bit first. If you cut three small flats like a triangle, it'll make any chuck very happy. If your drill's chuck is harder than this bolt (which it probably is), it'll probably wear them down a bit, too. If grip is still an issue, or you need to protect the chuck, wrap some sandpaper or something similar around the bolt first (rough side towards bolt) and chuck over that.

The idea here is to simply cut a slot in the end of the bolt to turn it into something you can unscrew with a screw driving tool: 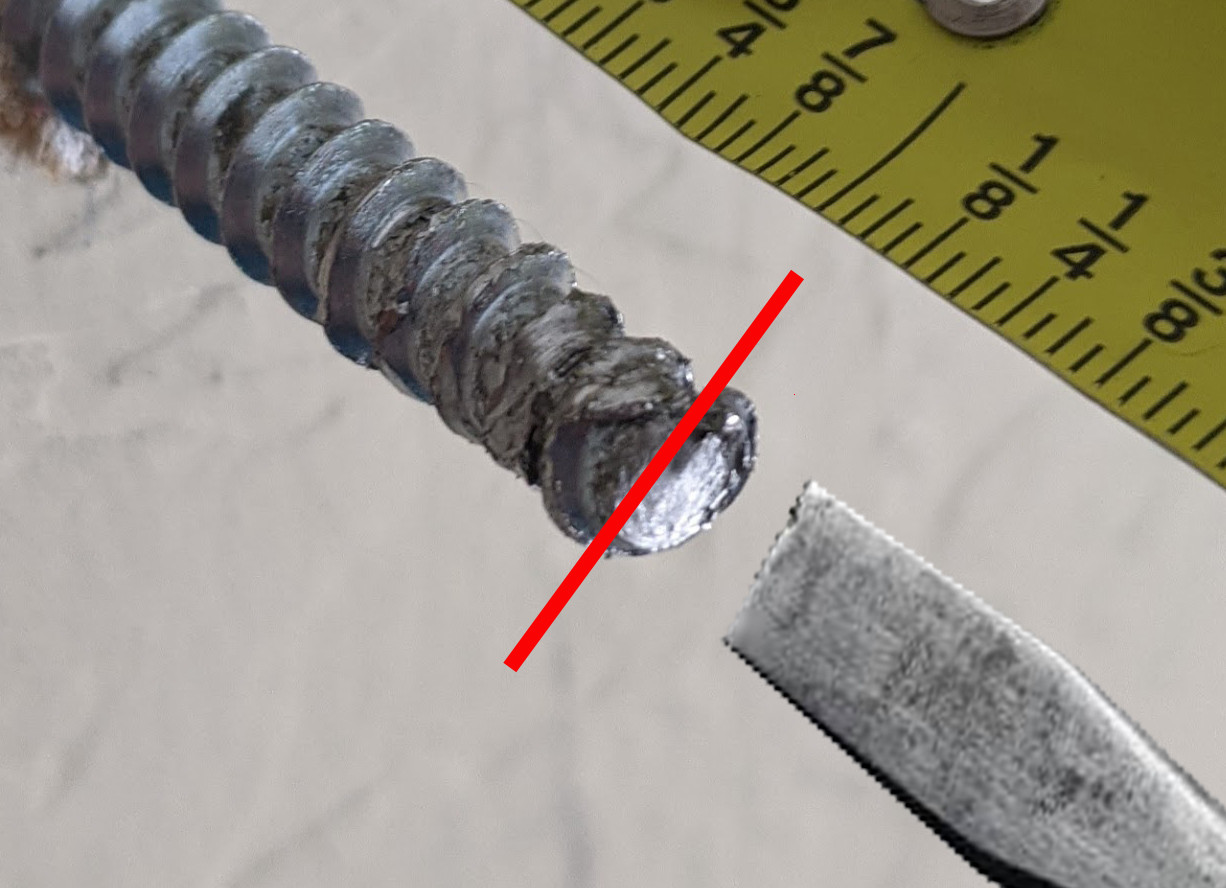 Use your cutting tool of choice to cut a horizontal slot through the center of the end; wide enough to get whatever screw driver into it. Now you've turned the bolt into a big screw, and you can use your screw driver to remove it.

Pro-tip: If the metal of the bolt is too weak and you find that the areas next to your slot are bending outwards; find a nut that fits the bolt and screw it on after cutting the slot. This will reinforce the metal and you should have no problems (unless you break your screwdriver bit, of course).

This is like trick #2 but for if you have a wrench instead, and you have a way to grind metal flat (you might not have the tools to cut a slot). It's also useful if the bolt (or your screw driver bit) is to small / weak for #2. For this, tools needed:

The idea here is to grind flats in the sides of the bolt (red highlight) so you can grab it with one of your socket tools or wrench, then unscrew it with that: 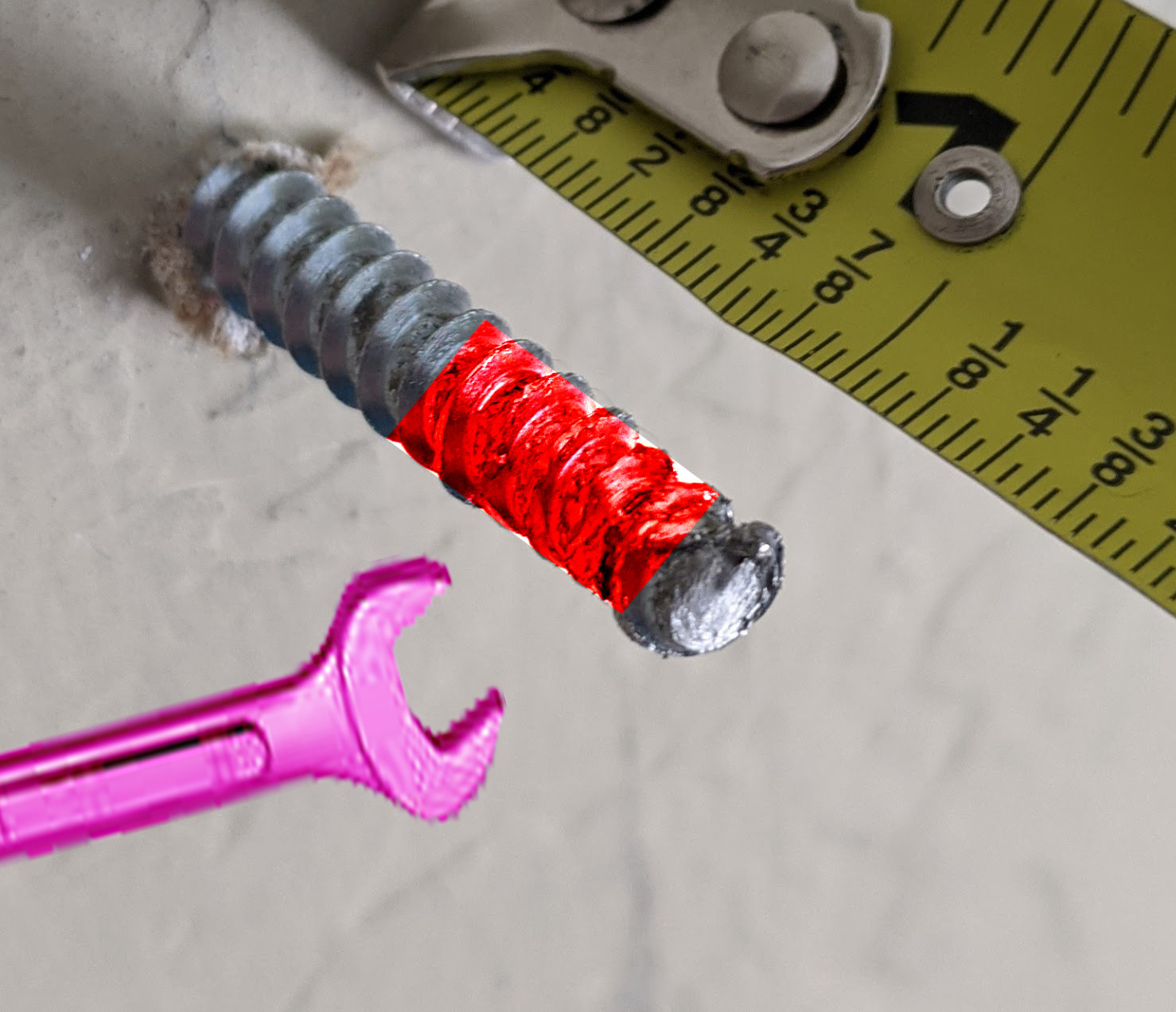 This one only sometimes works but can be handy if your set of tools is limited. Tools required:

What you do here is: 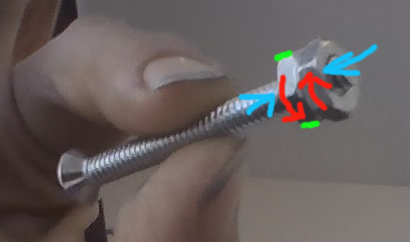 This one generally ends up being destructive but is sometimes your only option. Essentially, just brute force it out then patch up the hole. You'll need:

This is basically what you're imagining. Just whack the bolt until it either rips itself out of the wall, or loosens enough that you can pull it out.

A slide hammer (sort of like a reverse hammer) with a nut on the bolt to pull against could help here, too, although that's a relatively uncommon tool.

Success with this is limited but can work if the wall is soft or brittle, and if you don't care about the hole.

Note that depending on the size of the bolt and the properties of the bolt and wall, you have a risk of doing a fair amount of damage here, so you have to weigh the possible outcomes here first.

As an alternative form of the above, if you can't / don't want to rip the bolt out, but the wall is weak enough to give and there's hollow space behind the wall, sometimes it's easiest just to bang on the end of the bolt with a hammer and pound it into the wall, letting it fall into the space behind the wall, where it can spend the rest of its life thinking about philosophy or the cosmos or something. At least until some random contractor finds it 30 years from now.

Another form of that, if you have a nut, is to put the nut on the bolt almost to the wall, then attempt to use a crowbar or similar object between the nut and the wall to rip the bolt out with leverage.

There are other options to gain leverage here, too. If you don't have a nut, for example, you could try leveraging against the threads themselves using the V groove of a crowbar or the back of a hammer, etc. Anything you can think of to get a bite.

The difficulty with this one though is it's ideal if you can exert a force straight out along the bolt. If you come at it from the side (which is sometimes the only option, though) it can be harder to pry it out or easier to damage the wall.

This one is simple: Cut the bolt off flush with the wall. That's it.

You'll be left with part of a bolt in the wall, but at least you won't have a big hole to fill.

It's not ideal but sometimes it's just all you need.

Trick #7 - Keep and repurpose it

Not sure if this even worth mentioning but; if the bolt isn't in the way, you could always just hang your coat or a painting or something on it. :D

Anyways, hopefully those help. I use the vice grip method frequently, but I've also used all of the above at one point or another.

PS: Like I said, I just wanted to add some alternatives; but re: the vice grips, if you don't own a set already, IMHO it's worth going out and buying some just for this bolt. It's a very useful tool to own in general.

Use two nuts (if the thread is damaged so that you can't put any nut on, saw off a small part of the end), fasten them against each other, then use your spanner on one to turn the bolt.

This is so standard a practice that it's routinely used to fasten or remove studs that don't have a bolt head to start with. :-)

One option is to use a hacksaw or a rotary tool with a cutting wheel to carve a groove into the end of the bolt, effectively turning it into a flathead screw. You can then use a regular screwdriver to back it out. If the end of the bolt is boogered up too badly, it might help to file it smooth first.

You have 5 inches of screw firmly anchored into a stud so you might need more leverage than a standard screwdriver. A ratcheting socket wrench (or a breaker bar) with a flathead bit would give you significantly more leverage.

this bolt is made of weak metal. you have to be very careful. use a small diameter metal pipe. carefully bend the bolt towards the wall. Slide the pipe over the bolt and rotate counterclockwise. when bending the bolt, heat it if there is a tool for this. this will reduce the chance of the bolt breaking.

A small (10 inch) pipe wrench should make quick work of this situation. It's designed to literally grab onto smooth round steel tubes.

Channel-Lock Or Vice-Grip Groove-Lock pliers will take care of this.

First try the vise grip and it might unscrew it. If not, cut it off near the surface and then use a good drill bit designed to drill metal and slightly larger in diameter to the bolt and drill it down to slightly below surface so your spackle patch repair is seamless.

Not the answer you're looking for? Browse other questions tagged repair studs bolts or ask your own question.