Should I upgrade my evaporator coil when a I get a new furnace?

We are about to start adding a 400 sq feet addition to our just purchased to-be rental property that is 1000 sq feet, so 1400 sq ft. total. The property is in NE Ohio, so we get heavy snow and cold and humid summers.

In this house we are: Replacing the 17-year old gas furnace with a high-effeciency unit. Abandoning our in-slab forced-air ducts and putting in attic ductwork in both the existing space and addition. The 3-year, 2-ton rated air conditioner compressor we are going to keep - the HVAC guy said it may be underpowered, but since it is so new we are going to see how that goes. The interior is going to be a total gut, from the flooring to the attic, so anything goes and I'm not worried about anything getting damaged.

Since we are changing out the furnace though and changing the direction of the airflow from down (into the slab ducts) to upwards (into the new attic ducts) he is suggesting we change out the evaporator coils to one that is rated for 2.5 tons in a upwards direction. He says that he has seen issues with just flipping over evaportor coils, and if we do decide to upgrade to a 2.5 ton compressor, we would have to upgrade the evaporator coil as well.

This is an additional $1200, which is inline with an evaporator replacement. What I want to know is a) what he is suggesting makes sense, and b) are there issues will running an over-sided evaporator vs. the compressor? I'm more concerned with this being done right than cheaply.

No! Stop! You're heading down the road to ice-dam damnation!

The problem with throwing ducts in a presumably-vented attic in your climate is that when that snow comes, all the heat from the ducts is going to heat the roof up above freezing, melting the snow, which then refreezes as things cool off further, leading to the dreaded ice dam. (It's also a waste of energy due to trying to heat all that cold outdoor air coming in via the attic vent system.) Or, as Joe Lstiburek wrote on the topic in BSI-046: Dam Ice Dam: 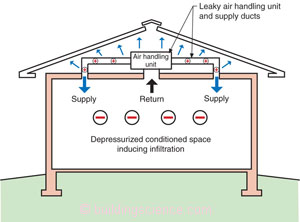 Figure 3: Stupid on Steroids—What could you possibly be thinking installing a duct system in a vented attic in a cold climate where it snows? The air leakage out of the ducts and the conductive and radiative losses from the surfaces of the ducts will kill you. Ice damming is absolutely guaranteed. Don’t do this. Stop. If you think you can guarantee that the ducts will be airtight, and that the openings where they penetrate the ceiling will be airtight, and that you can wrap them with enough insulation to avoid a problem, I have some Greek government bonds to sell you.

However, there is an option

If you insist on abandoning the sub-slab ducting and can't stand the thought of having to drop ceilings a bit in order to wedge ducts into the normal living spaces, there is a way to handle these ducts in the attic without damning your tenants to an eternity of ice dams, though. The trick is the use of a vented over-roof atop a superinsulated unvented/cathedralized attic; you'll have to talk with someone who knows your locale well about just how to split the insulation between boards atop the existing deck and batts and/or spray-foam between the rafters, but it's possible to build such a thing using either method, as long as the over-roof's deck is sufficiently vented to not have ice dam issues due to thermal gradients across the snow. (Snow is about R-1 per inch, after all.)

You also may need to condition the attic, and will likely have old insulation to remove if you go down this route, but it's a good prelude to improving the house's envelope performance (air leakage) overall, which'll mean that you'll have a much easier time stretching your existing air conditioner to fit the extra square footage. (The 400sf/ton rule MonkeyZeus gave is only good for terribly leaky houses -- modern, tight envelopes are capable of far better performance than that, and even a Code-minimum 3ach@50Pa is likely to get you a lot of the way to where you need to be with beefed-up insulation and fewer duct losses.)

At 1,400 square feet you will be undersized by about 1.5 tons. If you have excellent insulation everywhere then 2 tons might work but you will likely notice that your unit is constantly working on high for hours on end.

Not the answer you're looking for? Browse other questions tagged air-conditioning central-air or ask your own question.

4
Should I move the furnace upstairs to help cool the 2nd story?
0
Does a central A/C with copper lines that are too small cause compressor and diaphragm failure?
3
High Power Bills Related to Air Conditioner
0
Can AC fan or motor be upgraded?
0
Replace evaporator coils when replacing R22 condenser with a 410a unit?
4
Furnace blower motor runs briefly then turns off
2
AC - frozen tubes, no air flowing when fan on and system off
1
Placement of evaporator unit on top of furnace (residential)
0
Does a heat pump have separate unit for heating?