Is it possible to install a ceiling fan without an electrical box?

A while ago I had some electricians install a ceiling fan mount. Now that I've finally gotten around to installing a fan I've discovered that they didn't install any sort of electrical box to house the wiring. The hole they cut in the ceiling fell on a joist, so evidently they just gave up and installed a round resin adapter plate that they screwed to the joist, which the ceiling fan mount can then be screwed to.

Is this arrangement up to code (in MN) at all? How should I go about fixing it?

Based on your description, I "see" the ceiling cut out, a resin disc screwed to the joist. The disc has two or more empty holes that correspond to the device mounting holes in a standard octagonal junction box. Then there's a length of romex cable just hanging loose to which you're supposed to connect the fan.

If your fan's installation instructions indicate some part of the fan can be used to make connections, such as the ceiling canopy, you may be in luck. Make the connections there. More than likely, they'll assume you are providing a junction box in the ceiling. First ensure the fan's mounting kit is compatible with your resin plate. You'll need to get the wires from the down pipe, through the plate and into a nearby junction box you will install. The fan wires need to be long enough that there's at least 6 extra inches after running into the box. They must not bind against anything.

You'll need an old work box, a blank cover plate, some wire nuts (may be part of the fan kit), a short length of 1/2" flex conduit, a flex to box connector, and a plastic conduit bushing to protect the wire insulation where it goes into the conduit above the fan. You'll also need a romex to box connector if the box does not have them built in. Any wire running in a concealed structural space needs to be in conduit or non-metallic cable (romex), or a few other less common options.

You install an old work box by cutting the proper sized and shaped hole in the ceiling in a place where the box will not hit anything above the ceiling but is close to the resin plate on which the fan will be mounted. Do not install the box at this time, I'm explaining what will happen, but there's other things to do first. You would place the box in the hole, the box's flange keeps it from being pushed through. A couple retaining tabs are turned with a screwdriver so that the box will no longer be able to be pulled out.

If you hit a joist, you can use a 1/2" round junction box designed specifically for this issue (drywall is usually 1/2" thick). Make sure to find one that's designed to support the weight of the fan. E.g. this one will handle ceiling fans of up to 70lbs. 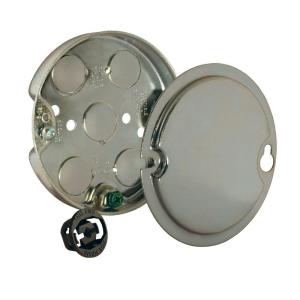 When you install this, you screw directly through the back of the junction box into the joist, so there's no need for the old work box with tabs or to open the wall up for a new work box that attaches to the side of the joist.

You should have at least three choices:

When hanging a fan it is critical to fan-rated boxes for two reasons.

See this article for some examples of these fan mounting methods:

Not the answer you're looking for? Browse other questions tagged electrical ceiling-fan junction-box old-work or ask your own question.