Could my wall have been damaged while the painters were painting?

I recently had my bathroom renovated. Before the renovation I had noticed some minor cracks in the ceiling. The building is 1962 and the walls are plaster. I had semi gloss paint used which I know can highlight imperfections a bit more.

However I did notice an area which I had never noticed before and I have included it in the photo. My questions: 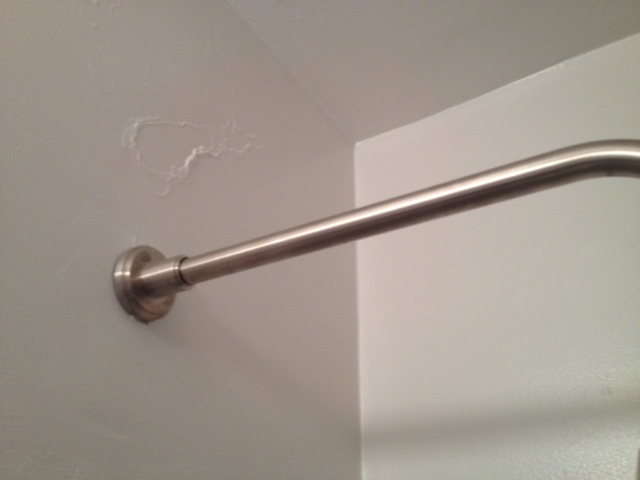 The damaged area could have been the place the shower head pipe may have originally projected out of the wall. When the rain type show head was installed it may have been moved to a lower level.

If this is the case then the damage that you see is just a shoddy hole repair. Fixing it up so that it looks decent will involve scraping, sanding and repainting the area as a minimum. Worst case it may mean removing the old patch and filling in with a replacement patch that was done correctly. Patch technique will depend somewhat on the type of wall it is. You mentioned plaster - is it on lathe or plaster backer board of some type?

It could be an ugly looking patch over a hole for an old shower head (or someone messed up when installing the current one and made a hole where they did not want to).

Another idea, especially if you want to blame the painters: if someone or something scrapped along that area of the wall after a coat of latex paint had started drying but was still wet it might bunch up. I am imagining the paint getting a film on the top layer but it has not fully adheared to the wall yet. Then if someone/something scraps along it the top layer gets all bunched together. It is hard to see from the picture exactly how high the ridges are. If it were semi-dried paint I would imagine it would not protrude from the wall a lot.

When talking about shower curtain rods there are really two types, compression and mounted. Mounted rods are superior in strength and cause less damage to the wall, but take a bit longer to install.

Compression rods apply horizontal force to hold the rod against the wall. They are not as strong and can fall rather easily. They can also pretty easily be installed too tight to where it cracks or damages the surrounding plaster or drywall. If it is mounted properly and sombody were to pull down on it before relieving the tension then that is another way that these types of rods can damage your wall.

I have seen similar damage around the edges of shower surrounds before caused by compression shower curtain rods.

That makes sense now that I look at it that it is a shower head pipe, there isn't enough room on the side to justify a shower curtain rod.

Apparently there must have been a shower head above that new shower head at some point in time. What you are seeing is either an incredibly amateur or incredibly lazy attempt at repairing the hole in the plaster wall where the previous shower head existed.

Not the answer you're looking for? Browse other questions tagged bathroom paint crack or ask your own question.

3
Why is there cracked paint on my new plaster?
3
How can I paint/stain an interior concrete floor?
2
Best solution to protect the floor while painting the walls
1
How to indentify if the crack on plastered brickwalls is cosmetic or structural?
2
Fixing cracks in a cinder block wall
1
What could cause a crack in the drywall where the wall meets the ceiling?
1
Bathroom Sink Clog
1
Rolled paint on wall has a patch that goes completely flat (not colour but flat as in looks like it wash brushed not rolled)
2
How to fix black gloss paint bleed on brilliant white eggshell walls + paint stripped from walls