How to move nut that is corroded onto tap?

I'm trying to change a bath tap (faucet for our American friends). On the hot tap side, the nut which holds the tap onto the bath is seriously corroded, and I can't unscrew it.

As always with bath taps, everything is made more difficult by having to work in a tiny cramped space between the bath and the wall. I'm doing it all lying on my side on the floor with my arms fully extended, it's really awkward.

Here's a photo of the offending nut: I can wiggle the tap around and can see that it's not stuck to the bath itself, it's just stuck to the screw thread. 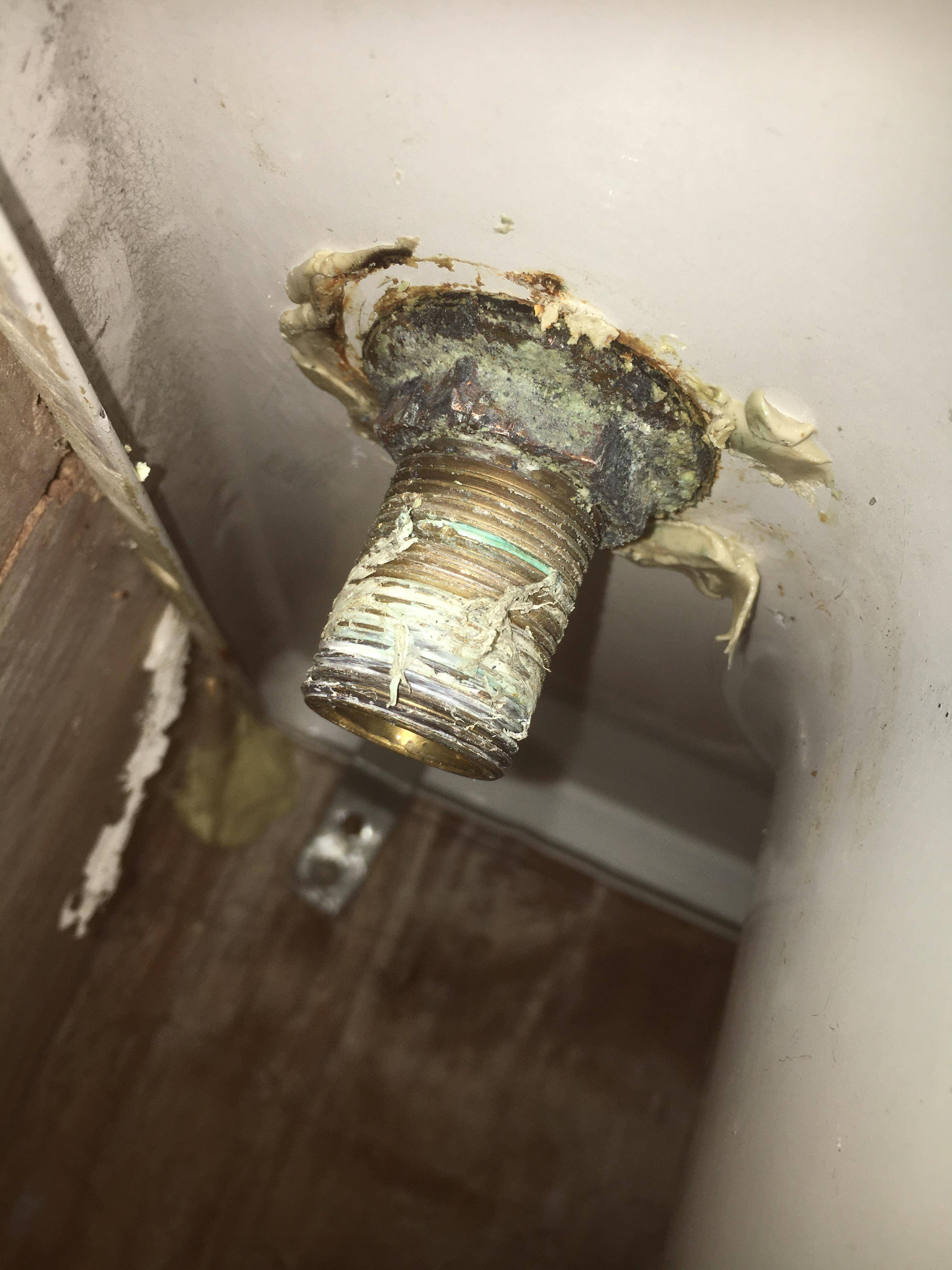 I've had a go with water pump pliers, and two different kinds of basin wrench: 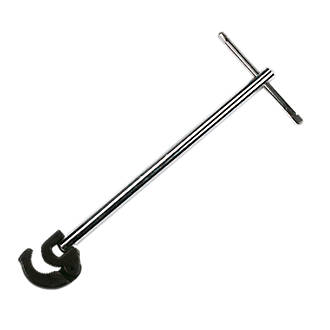 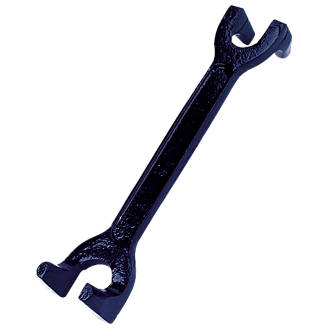 With the first one of these, I managed to get a really good grip on it, but even pulling the two rods I wasn't able to shift it. I even managed to repeatedly bash one of the rods with a hammer but still no luck.

I'm stuck now because the water is turned off for the house (because of course the isolating valves below the taps are corroded and jammed too so I can't turn them off properly).

Any ideas, anyone? Should I just keep bashing the basin wrench with a hammer? thanks

EDIT - it's hard to see where the nut ends in that picture, but it includes the flat part above - it's one of these basically: 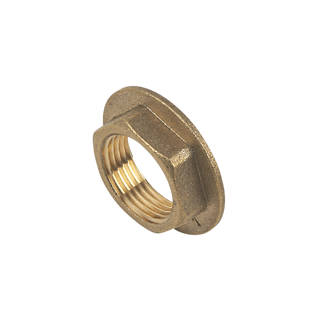 You can purchase a variety of thread-loosening lubricants to dissolve rust, or you can lubricate with plumber's wax. In the end, however, it requires heavy wrenches with long handles and a certain amount of brute force to make headway when separating the most tightly-locked joints.

Spray lubricant on the outside of a corroded joint and give it time to seep into the joint and dissolve rust on the threads, which usually takes about five to 10 minutes.

Grip the fitting you are trying to separate with one pipe wrench; grip the pipe to which it is attached with another. Hold the pipe steady while you turn the fitting counterclockwise with respect to the pipe. Spray more lubricant and wait an additional five to 10 minutes if the fitting won't turn, then try again.

Tap the fitting with a hammer as an additional way to loosen the threads. Create more torque with the wrenches by lengthening the handles with 2-foot lengths of 1-inch metal pipe.

Lubricate the joint with a plumber's candle as an alternative to using spray lubricant, or as a supplemental measure. Heat the joint with a propane torch until it is hot enough to melt wax. Hold the tip of the candle against the joint and move it around the pipe while the wax wicks into the joint. Try turning the fitting when the wax cools. Repeat the procedure if the fitting still is locked.

Your main problem is trying to loosen this nut in a small space. Sometimes you just have to bit the bullet and get a rotary tool with a 1" cutoff wheel and cut through the nut on one side. Then put a screwdriver in the freshly cut slot and twist it to break the thread grip on the faucet. Since you're replacing the entire faucet, you don't have to worry about damaging the threads. Sometimes, you might have to spin the faucet round and cut through the nut on the opposite side but one cut usually does the trick.

To explain what I actually managed to do in the end: I never did move the nut but I did solve the problem in an unexpected way.

I put a box spanner on the nut, and put a screwdriver through the holes at the base of the box spanner. As luck would have it, the handle of the screwdriver was poking up against the hole where the overflow pipe connected to the bath (I'd already disconnected this to give me more room to work). I pressed a section of copper pipe against the handle, so the pipe was poking out into the bath, and then repeatedly bashed the end with a hammer.

Eventually, after hitting it with increasing force, and invoking some powerful swearing, something gave. From that point I was able to unscrew it in a more convential way with the box spanner and eventually by hand, and the whole inlet pipe was unscrewed from the body of the tap. This is it - the thread above the nut was screwed into the base of the tap. The nut is still locked in place. 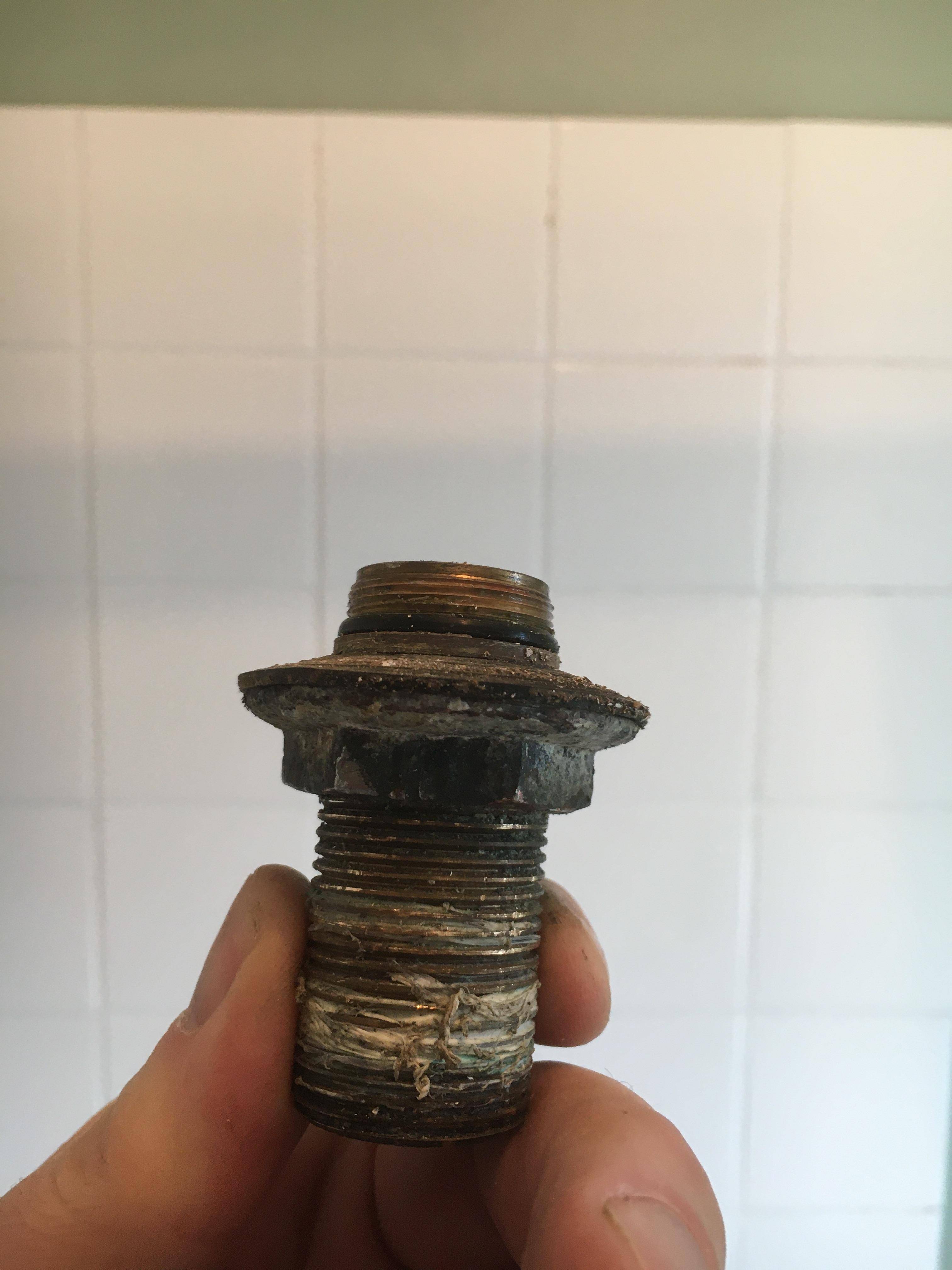 Once this was removed, I could see that inside that inlet pipe was a hex-shaped hole, which was presumably used to screw it onto the tap in the factory, so if I'd known that I could conceivably have put a long hex key of the appropriate size up into the inlet from below, and attached a socket wrench to it, and tried unscrewing the inlet from the tap in the first place, forgetting about the nut. But I would never have known that until i'd completely removed it and was able to look inside. I didn't even know it was a separate part that could be removed.

It's something to bear in mind anyway, if you're in this situation - put your phone under the pipe and take a photo, with flash, of the inside of the pipe and see if there is something inside there you could get leverage on - you might be able to unscrew the pipe from the tap, rather then unscrew the nut from the pipe. In hindsight I think that would have been the best thing to do.

Not the answer you're looking for? Browse other questions tagged plumbing corrosion stuck or ask your own question.

4
What do you call this old pipe to bath tap join and how do I remove it?
6
Are either of these tools suitable for tightening the pipe union nut underneath a bath?
2
If I fit a water softener, will I run out of on-demand water via bath/shower-use?
0
Replacing kitchen faucet, unsure how to remove old plate holding hoses
0
Seized "ballofix" ball valve can't shut off water properly
1
Sump Pump issues - both died and constant pit filling
1
How to remove corroded faucet?