I'm trying to swap out an existing two way combo switch with a new. When I pulled it out, the right side terminals had three wires. Two black and a red. On the left side there was one black. My new outlet only has space for two wires on the right and left. How do I wire properly? Thanks, new here 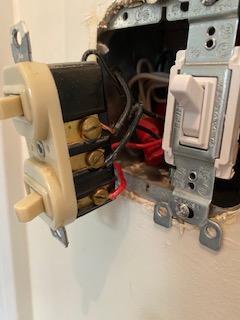 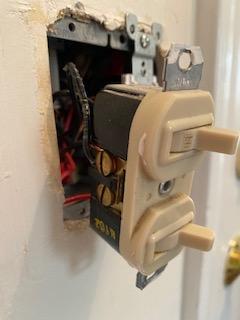 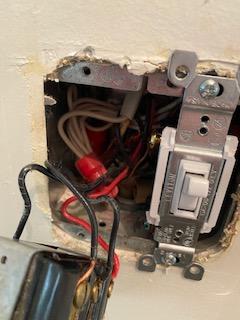 Your existing combination switch has a normal single pole switch on the top and a 3-way (two location) switch on the bottom, while it sounds like your new switch consists of two single pole switches, which won't help you with your garage light very much. So, as you are suspecting, you'll need to take it back and get the correct thing; fortunately, it shouldn't be that much harder to find.

As to how this was wired

The good news is that we can identify the functions of the old wires from here. Clearly, since the black wire on the left is shared between both halves of the old switch, it must be the always-hot feed in. From the terminal screws on the right, the top one is connected to the black switched-hot for the light controlled by the top (single-pole) switch, while the bottom two screws connect to the black and red wires that serve as the travellers to the garage light.

You'll need to remember what these wires do, though, since the positions of the screws on the new switch isn't going to help you any, only the fact that the common screws on said replacement will be a different color. Also note that NEC 404.9(B) permits snap switches to be grounded by their screws, so don't worry about running a grounding pigtail to your switch.