What are some proper screws or anchors to use for affixing something to a steel walk-in door?

The example for this question will be attaching an automatic closer to an exterior steel door. The door is a typical residential steel walk-in door, which is "hollow" (foam core) and made of a rather thin-gauge of steel: 24 gauge = 1/40" = 0.0209 inch = 0.53 mm.

Here's a cutaway-view of an example steel door: 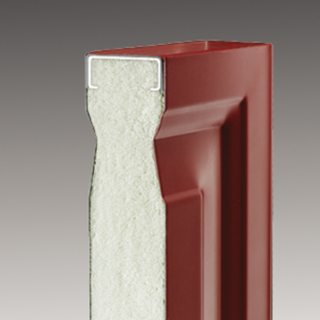 The steel being so thin creates a problem. The door closer in question came with machine screws and tells the installer to use a 12-24 tap, which I found odd. Maybe they expect a thicker gauge of steel? I used my tap and the screws stayed in for a few months, but someone tried pulling the door closed faster than the closer allowed and the resistance from the closer caused the top screw holes to blow-out. The bottom ones are nearly ruined as well. 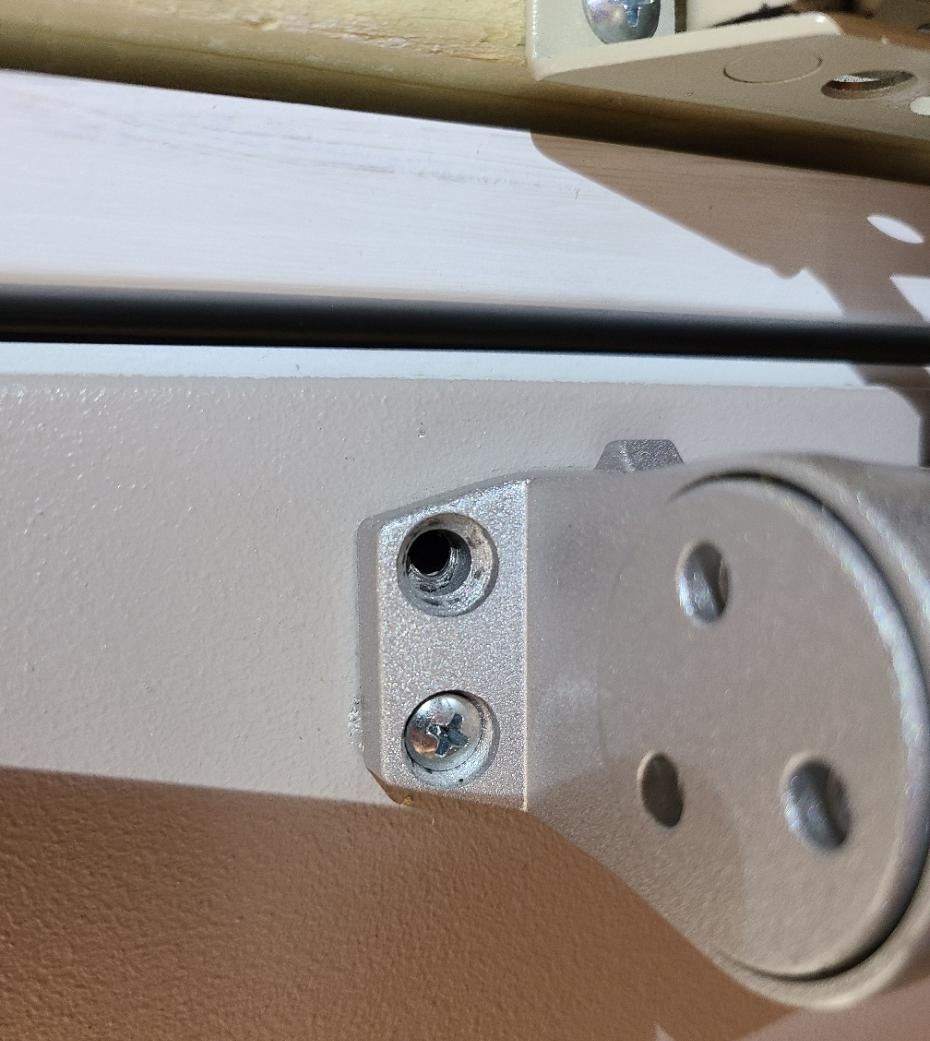 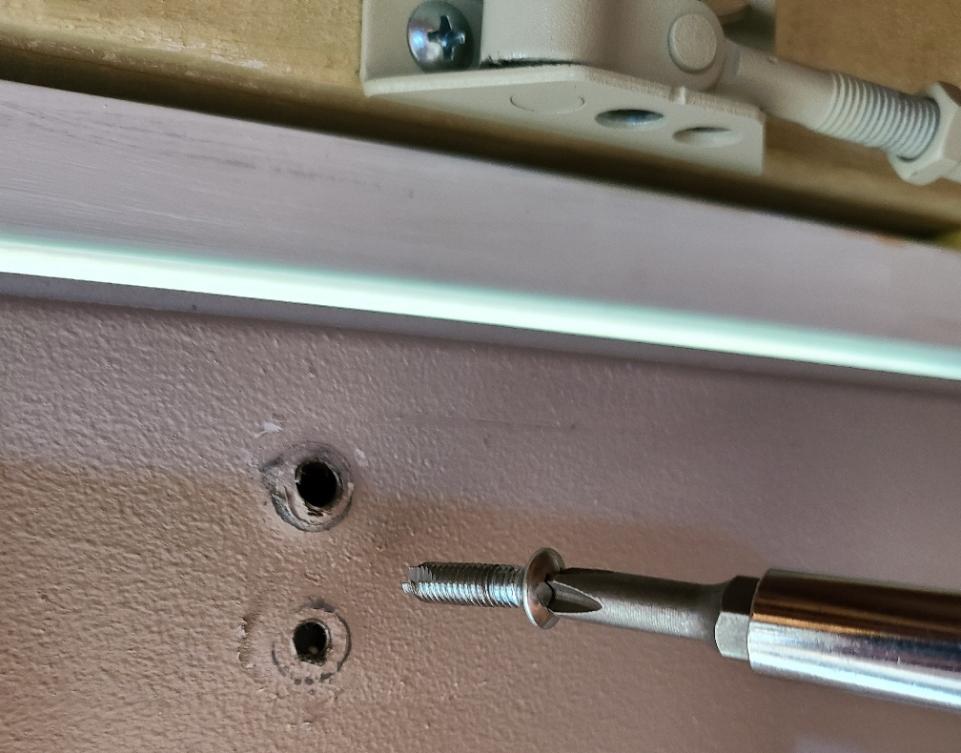 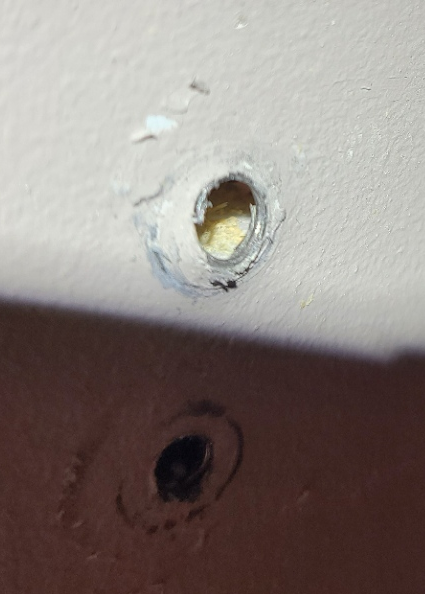 I would use anchors of some sort, but I can't seem to find any that are made to work on such an incredibly thin surface. Most anchors I see have a minimum thickness of 1/8 inch, and even then I would question them: 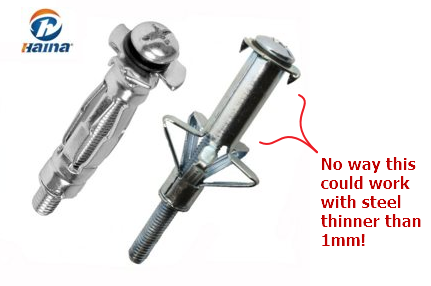 The only anchors I see that claim to be for "hollow-doors" are this type, but they seem to be made for hollow wood doors commonly used for closets and such. They don't seem right for this job: 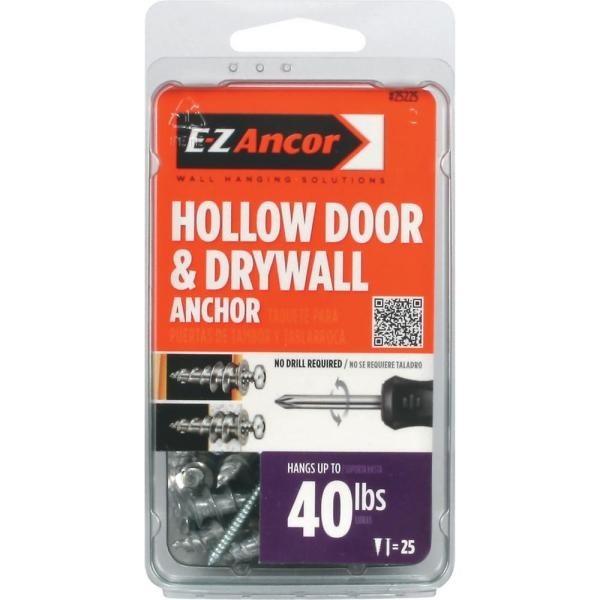 Maybe they just don't make anchors for this type of thing?

I was thinking I could use "thicker" threaded screws like wood screws. I'm not sure how much that will help here. I worry it will just blow out the hole again and leave a larger hole behind. Plus, a rather thick wood screw would be needed since the holes are already wide.

What's a safe way to fasten this closer to reduce the risk of blowing out the holes even worse?

This appears to be well suited to a rivnut installation. The threaded insert is placed in a hole sized appropriately to the insert, the tool is used to compress the portion inside the door and the threads remain for the bolt to engage. Rivnuts are best used on thin sheet material.

Rivnut tools can be quite expensive, but those are primarily for production grade or professional use, while home improvement level tools are less durable and more affordable: 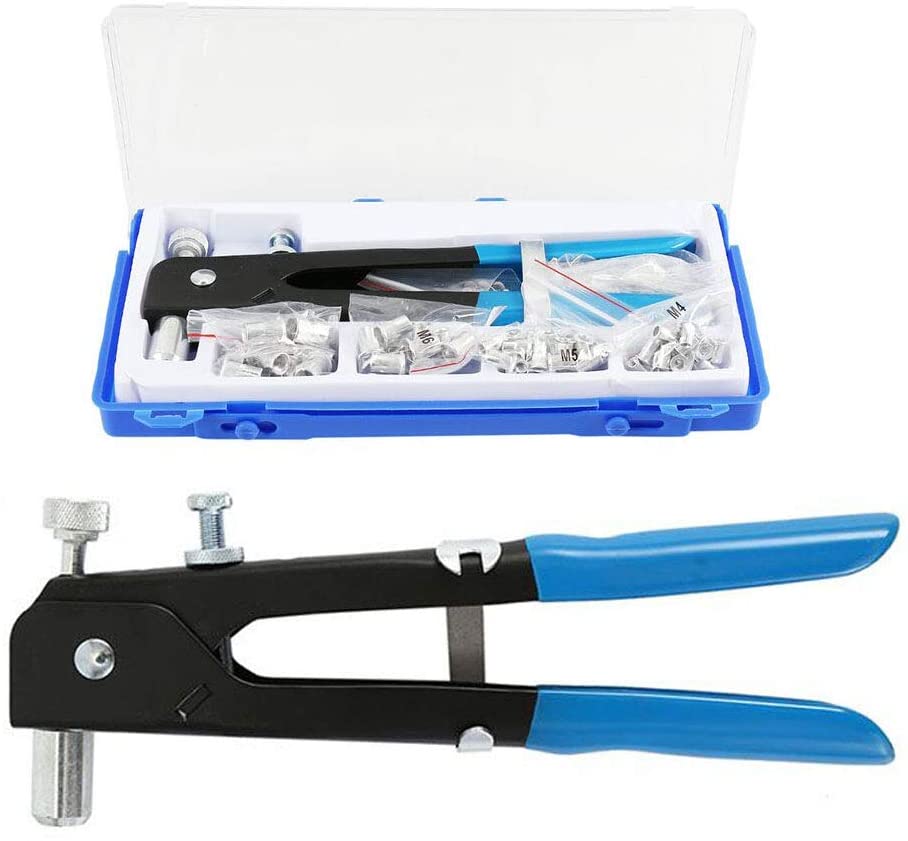 This kit would have nearly a lifetime supply of inserts, although the tool may not last a lifetime. I have this specific tool and it works well.

Any type of threaded screw will eventually pull out. I'd think about using some bolt and cap nuts. You'd have to drill right through the door and can probably use the same holes on one side. I'd think about adding a few washers on each side for a little extra strength. 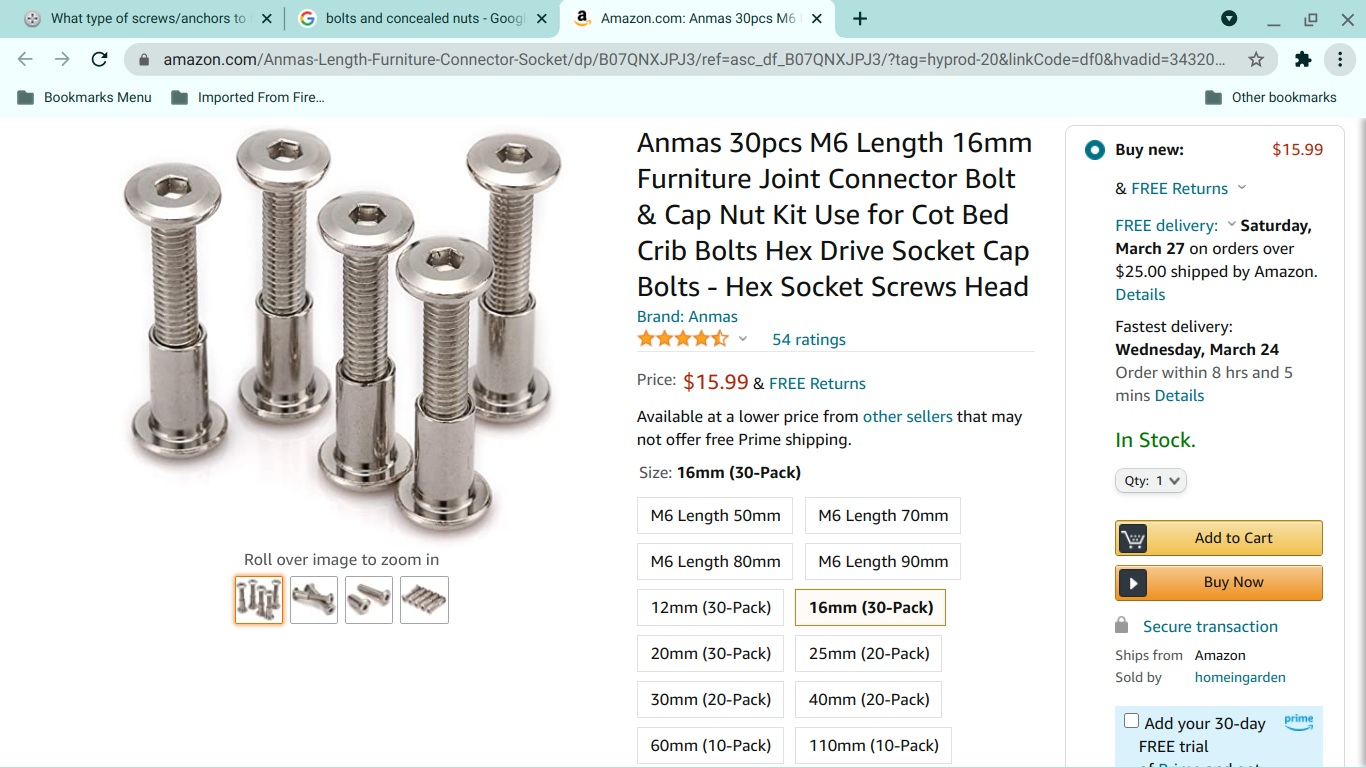 Since security could be a concern, I'd suggest a plate on the outside with square holes punched, or round holes drilled to accept carriage bolts that go all the way through the door and nuts on the inside.

This will prevent anyone from being able to remove bolts from the outside.

If you can find a metal fabrication shop in your town, I'm sure they'd be able to make some square holes for you. Of course, it would cost a few more bucks, but that's the price of progress...

Could I suggest not using screws at all, and using something like 3M VHB (Very High Bonding) tape? Some varieties are stronger than rivets, at least according to 3M, and is used in a lot of places where rivets used to be used, such as in attaching various parts of cars to the frame, or in bonding parts of airplane wings together. See https://www.3m.com/3M/en_US/vhb-tapes-us/. They do require a few days to set before the bond is permanent, however.

Have you considered old-fashioned butterfly anchors (AKA toggle bolts)? They're fairly burly, cheap, widely available, and don't require any specialty tools, equipment, machining, etc. Note that for a foam-filled door, you would need to do some fiddling to make sure the "wings" can actually open up in there, but just sticking a scribing tool in the hole on an angle and digging around to break up the foam should do it. (Or a nail held in a pair of pliers, if you don't have a scribing tool lying around.) 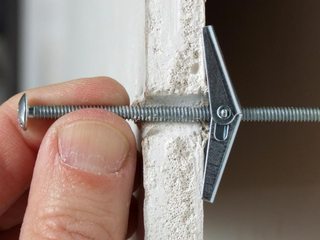 Decent quality, decent sized butterfly anchors should hold easily as strong as "rivnuts", likely more so, as they spread the load much farther over the surface. And not needing a specialty tool to install them is a bonus.

FreeMan's approach of a backing plate with carriage bolts all the way through would be far more robust, of course, but it's also far more expense and effort, and leaves you with a big ugly backing plate on the exterior of the door. If you were installing a mag-lock to secure the door against break-ins, I would suggest the backing-plate-and-carriage-bolts solution. For a door closer that just needs to withstand some casual abuse, butterfly anchors should be plenty.

And don't consider tape. It's just possible, maybe, that a modern adhesive like JB-Weld's 2-part epoxy for metal would be up for this job, but... that's a small surface area, on an uneven and flexible surface covered in paint. To give any adhesive even a fighting chance, you'd need to wire-wheel down to bare metal, clean it with solvents, and then clamp (or bolt) the glue joint for hours to let it fully cure before using it, and even then it would be unlikely to hold as long as the original machine screws did. As for VHB tape, it's good stuff, but this is not a problem you're going to solve with tape.

Another thing you might try is to create an "adapter plate" to spread the load of the door closer over a larger area of the door.

As you've already experienced, that this sheet metal is not capable of supporting the door-closer forces centered at the 3-4 screws on the closer.

A piece of aluminum plate could be used to spread the load to 5-10 screws over a larger portion of the top of the door. Then the closer could be screwed to the adapter plate.

This would spread the door closer forces over a larger number of screws lessening the load on any single portion of the thin door material.

I would recommend something this: 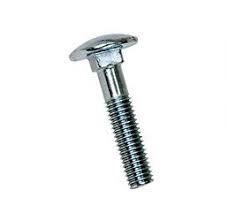 It is for wood, but I think it will do fine with thin steel. Name should be coach bolt.

Drill hole through door big enough for thread on the bolt to pass freely. But too small for the rectangular extension under the head. Insert bolt from outside of the door and screw nut from inside. The extension should extend round hole to square and prevent the bolt to slip as you tighten nut.

Not the answer you're looking for? Browse other questions tagged doors screws anchor fastener or ask your own question.

6
Why doesn't my freshly painted door fit back in the frame?
2
How to fix this door handle
1
what kind of sheet-metal screw do I need for wood to 1/8" steel?
1
What can I use to back a door jamb strike plate with no framing behind?
0
Install deadbolt in steel door and door jamb
1
Metal door frame; the screwholes holding the strike plates are stripped out. What to do?
1
What material does a door in your garage that leads outside need to be?
0
Anchors for concrete - what to use on a concrete ceiling?
18
How to keep screws in a hollow door