How to fish low voltage wire from finished attic dormer through heavy framing?

My idea is to drill a small hole in the wall where the purple circle is, route the wire down the wall as shown and then into an unfinished crawl space (red outlined areas). There is a specific problem I’m asking about, and I’m open to other ideas. I cannot get into the dormer soffit, it’s finished with no access.

The issue is that the framing is all very heavy. The green lines indicate actual 4x4 beams and the horizontal one between the dormer and the crawl space is even heavier. I can get into the crawl space beneath it, and drill up into the wall as shown by the yellow arrow. But the bottom plate of the dormer is very wide at that point. It extends about an inch out of the dormer into the roof space below, and about two inches into the dormer where it forms a ledge you can see in one of the pictures. My fear is that drilling up from underneath as shown by the yellow arrow I might end up going through the roof or into the inside ledge.

I can make small holes in the interior wall to help fish the wire through. I'd like to avoid opening a huge hole in the interior wall, from where I can easily drill down into the crawl space but then refinishing is more work than the entire project would be otherwise.

Note, aside from the question itself, my intention is to install an outlet in the crawl space, run my own low voltage wire from there to the outside, and splice it to the camera connector outside and to the wall wart inside. 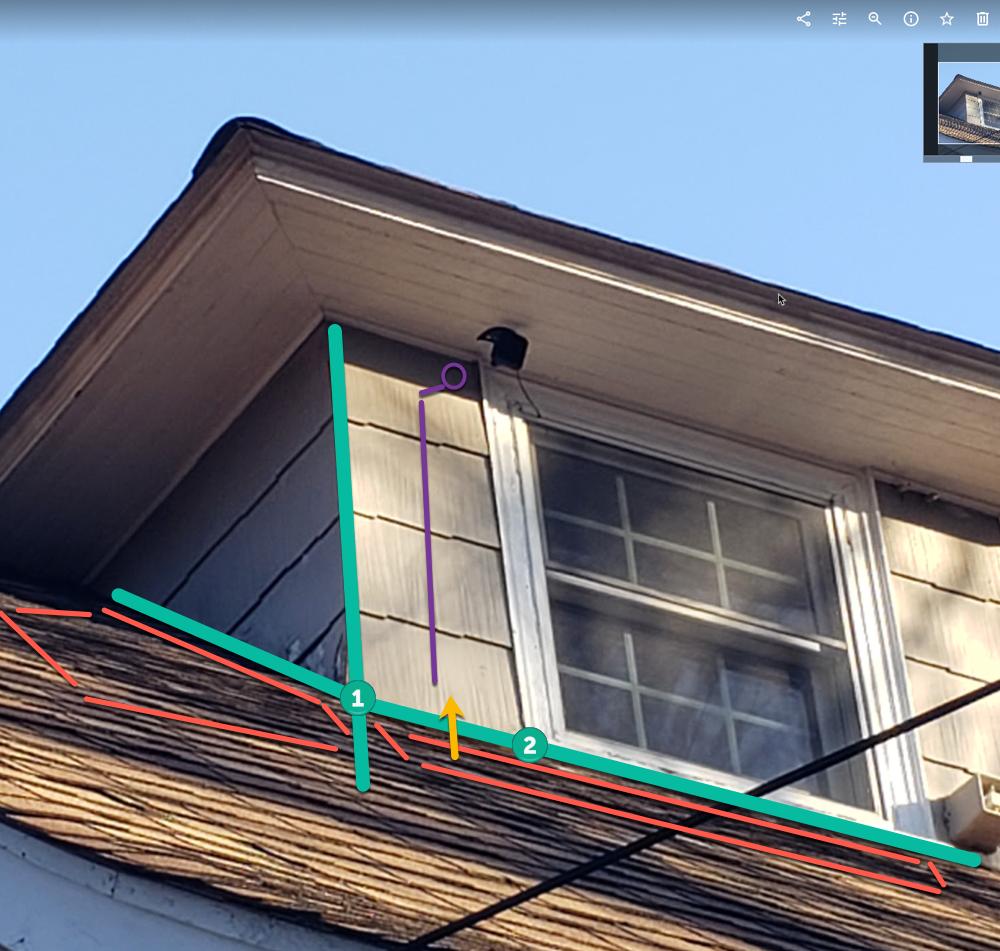 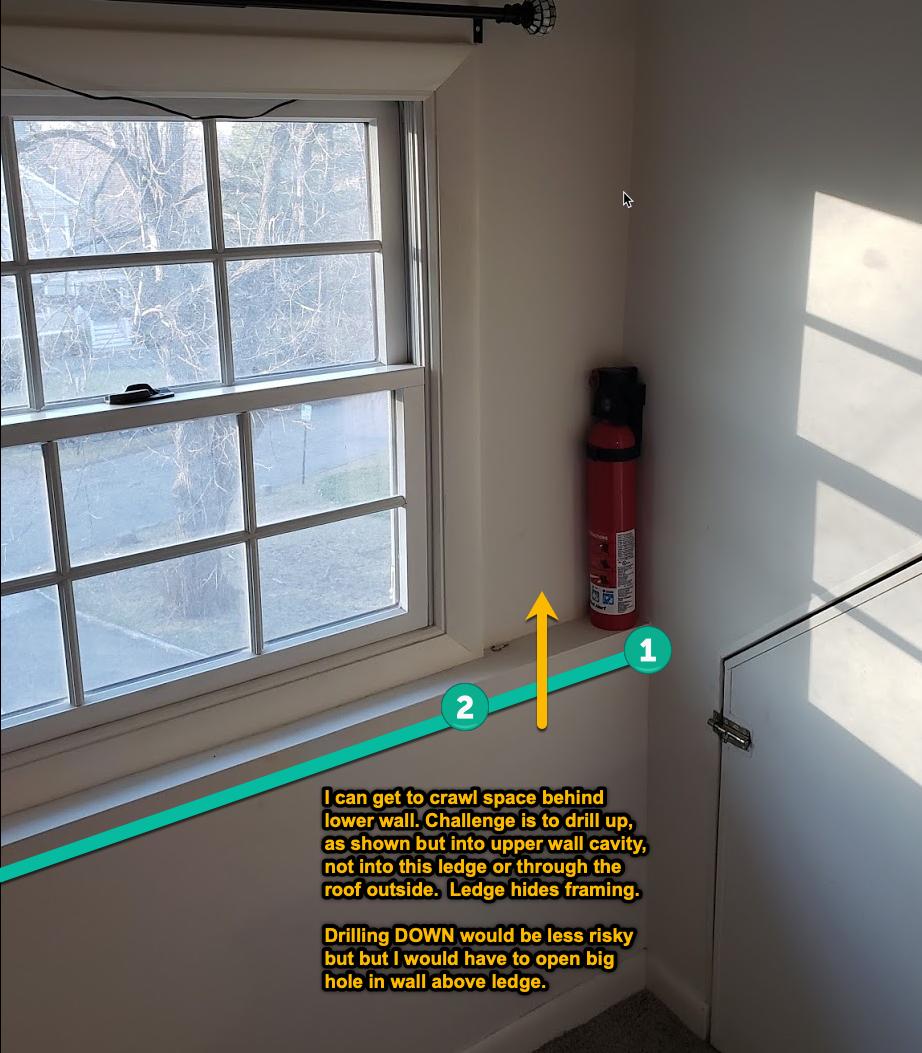 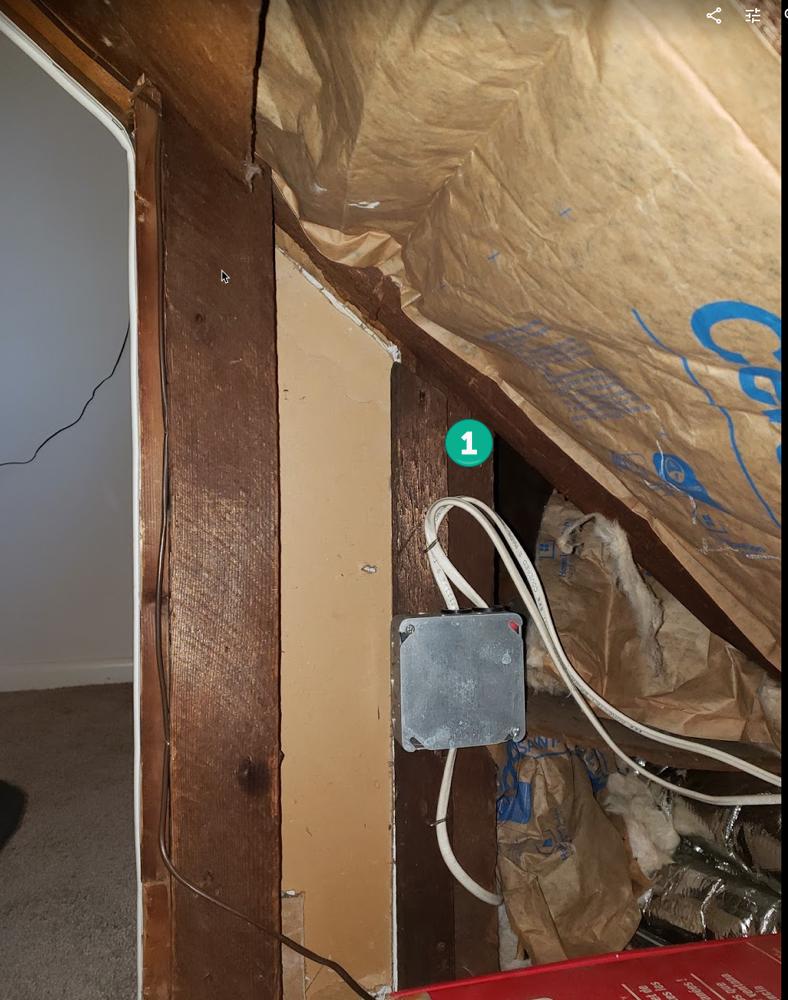 It's probably reasonable to assume the wall board has equal thickness above the ledge and below the ledge. Then you can measure the depth of the ledge at the yellow arrow, which is front-face to front-face of the wall board. Bring that measurement into the crawl space and measure off the back side of the lower wall -- this tells you where the back side of the upper wall is at. Add another inch and you've got a position that is comfortably inside the upper part of the wall.

If you'll still prefer to drill down rather than up, consider a long drill bit (sometimes called a bellhanger drill bit). You could use it to pierce the interior drywall and continue on through the lower framing. Yet another approach is to remove the right-hand piece of window casing. There should be a gap between the window and the rough opening. You can drill down in that space, again with the bellhanger bit, and afterward reinstall or replace the wood casing instead of repairing a hole in the wall.

I finally completed this project. I'm documenting the many issues I faced.

My first hope was to follow @greghill's advice to take measurements of the ledge width and wallboard thickness and use that to calculate where, on the very wide bottom sill, I should drill upwards. After measuring about 10 times I had enough confidence to do it. 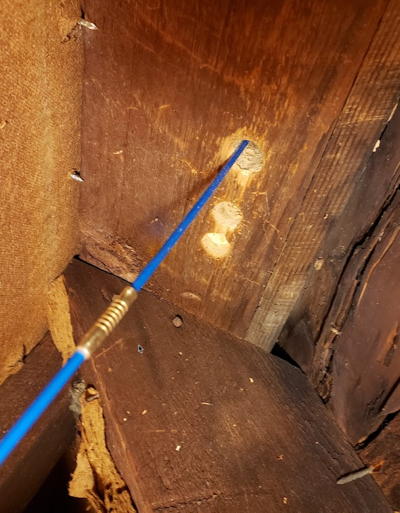 Of course it took three tries! I chose a 3/4 inch bit to match the hook attachment on my fish tape. My first attempt hit a nail and destroyed a bit. My second attempt sank the entire 6 inch bit and was still drilling. I knew the sill was over 4 inches thick but I just suspected I had drilled into a stud so I moved over a little more for my third attempt and that finally got through.

It was very easy to get the tape into the cavity all the way up to the top, so I thought there must be no insulation in there. I drilled a hole in the outside wall where I wanted it and tried to stick a wire in to catch with the hook, but I felt insulation. I spent a while trying to get them to meet but failed.

After much frustration I surrendered to the need to cut a hole in the inside wall. Then I discovered this: 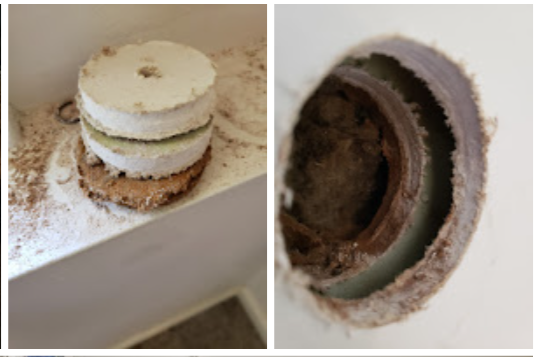 The inside wall was three layers thick with furring between the second and third!! My fish tape, thanks to the careful measurements suggested by Gregg, was up between the outer two layers. And the main cavity was hard packed with insulation.

My original plan to do this without damaging the inside wall was futile. There was no way to fish anything through that insulation and without knowing what was inside the wall, no way to do it blind.

So now, with a small hole in the outside wall, a larger one in the inside wall, and ready access to all the layers I was able to fish a wire from outside to inside then through the empty space between the 2nd and 3rd layers of wallboard into the crawl space.

Total elapsed time was a frustrating 4 hours including sealing the outside hole and repairing the inside hole using the core I had cut out. Then another hour to install a receptacle in the crawl space and I still have to spackle and paint the inside wall. In all, hiding this cable amounted to a full day's work. I wonder how a pro would have done this?

Not the answer you're looking for? Browse other questions tagged wiring data-wiring or ask your own question.

16
How do I run ethernet, speaker wire, and coax through a wall into a crawlspace?
6
How can I find an interior wall from the crawl space?
10
How do I get all these wires up from the basement to the attic?
4
Cat 6 and Romex run perpendicular
2
Install interior camera on an exterior wall.
4
Does wire run in conduit in a crawl space need to be rated for moisture?
0
Run electrical wire outside in for new lightings for cathedral ceiling
1
How to drill through soffit corner?
2
Best way to install Emporia Vue Gen2 energy monitor OUTSIDE load center?