We had an outdoor tap (faucet) fitted in the summer last year here in Edinburgh UK. The temperature here often dips to just below freezing over the winter. Outside, at least. The plumber suggested we should turn off the water under the kitchen sink (a screwdriver turnable valve), but also leave the tap/faucet fully open on the outside wall. That last to allow cooling water to expand up and out as it is freezing - hopefully slowly. That's exactly what we did.

Anyway, Today (March 21st), I closed up the outside tap, and under the kitchen sink opened up the wee valve. Guess what? .. super spraying burst pipe outside!! There's a copper pipe rising to the tap, from foot level, and it has burst a couple of feet up. We followed instructions to the letter :(

We need to get that repaired, but what to do instead for next winter? Under the kitchen floor (a crawl space for slim people) there's push-to-fit plastic piping. That goes out through a cavity wall as copper pipe, before making a 90 degree turn up the wall at foot level. Is polystyrene insulation enough for the same pipe? Do we need a mechanism to fully drain the outside section? 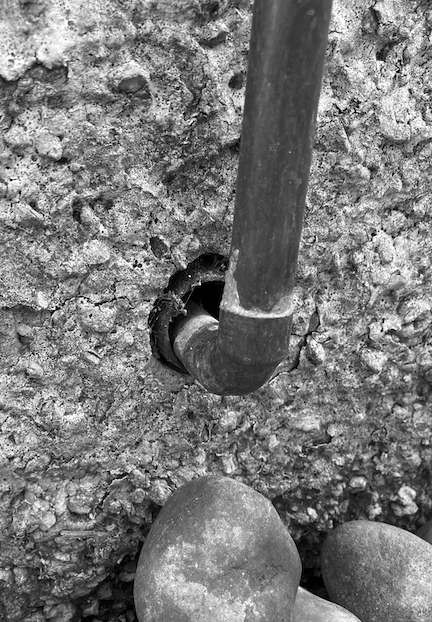 What I would do ( have done) is replace the elbow with a "T" and add a valve to be opened in winter . Presumably the valve will be below grade and will need something like a sprinkler valve box. I have a few similar drain valves in my sprinkler system.

The reason it bursts is because inside the tap is a non-return valve which is required to comply with water regulations. The valve stops the tap draining. In this instance it is better to fit a tap without the non-return valve and instead fit a separate on inside the property next to your isolating valve. Your plumber will be able to do this when he repairs the burst.

FWIW, I'd also replace the rubbish isolating valve (they are NOT designed to be used more than around twenty times) with a good quality (e.g. Peglar) full bore butterfly valve. These are designed to be used regularly and will allow proper use of appliances such as pressure washers which need full flow.

Ask if you need more advice.

Unfortunately, the US solution pictured (although a good product) would violate UK Water Regulations so cannot / must not be used.

TBH there is genuinely no need to replace the bottom elbow with a tee. Once you turn off the water each winter, and crucially leave the tap itself open, because the non-return is inside the building as the water cools (and physically expands) the 'excess' water will push out of the spout meaning that pressure cannot be build up sufficiently to burst the pipe.

Not sure if this is applicable, but here in the US we have something called "yard hydrants". The weather were I live (western Washington state) is similar to the UK.

The taps are controlled by a rod to the valve which is substantially below ground level. Not only that, they have a drain that drains the upper part into the ground when the valve is closed. You need to put in some pea gravel when installing it to give the water a place to go. I have 3 on my property and never had one freeze up and we've had some very cold days.

For a power wasting low maintenance option, install thermoelectric heat trace and insulate and it won't freeze unless you lose power. You'll obviously spend money on heating every season.

Water in pipes tends to use gravity. It doesn't like to go uphill. It appearss that the tap outside is higher than the pipe feeding it. In order to drain that pipe - which obviously didn't happen, but needs to - there needs to be a cock at the lowest point.

If that's where the elbow is, that needs changing - a T with a cock will do. Otherwise, if the pipe goes lower inside the house, then the cock needs to be in it there.Then, you can drain the whole pipe, with the inside valve closed, and the outside tap open.

Insulation may help, but I wouldn't rely on it. Put something in the freezer, covered in insulation, and it will eventually freeze regardless.

Lag the pipe with closed-cell insulation; from https://probuildermag.co.uk/features/beat-freeze-10-tips-manage-frozen-pipes

Why is closed cell insulation so effective at preventing pipes freezing? Closed cell insulation is made up of millions of self-contained, tightly packed bubbles, which provide a greater level of insulation than other materials such as bead and foam for a given thickness. That makes it a very economical choice. In addition, closed cell insulation does not absorb moisture, which means it can be used on pipework in cavity walls, cellars and under floorboards. It won’t be affected by wind driven rain, flooding and prevents condensation on the pipework itself.

Construct a box around the pipe with insulation in - old school. These can be made with a roof over the tap as well.

Some plastic pipes are more frost resistant than copper pipes and if they freeze they can expand a bit without leaking.

Heat tape; although that is probably the last option as you need to provide an electical supply.

Where I live, we put styrofoam domes over the outside taps. Your long pipe is larger than that, but you can use the same idea. Find a cheap/disposable foam cooler sold for picnics, and use that to cover the whole thing. Or, just buy foam boards and glue together a suitable box shape.

To make it hug the wall, put a more squishable foam around the rim to form a gasket (these are sold as weatherstripping) and have it grab the pipe to hold on. I've seen two variations of this mechanism:

One is simply a rubber band. It is attached to the inside of the box, and you hook it over the knob or whatever. This relies on it having enough stretch to get your hand under and still pull tight; plus the rubber becomes brittle over time.

A better way is cord that passes through a hole in the back of the box. You loop the cord around the pipe, then draw it tight from the outside; it has a little thing strung on it that's the same as for a drawstring bag or hood, that grabs the cord normally but releases when you hold down a button.

Not the answer you're looking for? Browse other questions tagged plumbing water pipe uk freezing or ask your own question.

1
Why is there a copper wire attached to this water pipe?
1
Preventing a frozen pipe on an extreme weather night
0
Should I caulk around this drain pipe?
0
Can my pex line freeze if I use 90 degree elbow connectors?
0
Run water from under deck to backyard
2
fix broken water pipe in garage (burst in winter)
0
No hot water from kitchen faucet yet there is still water flow through hot water valve