For the oven connection, the electrician ran #8 wire (two hot, one neutral, one ground) to the kitchen but didn’t put in an outlet.

Additionally, the cord out of my Bosch oven doesn’t come with a plug either. The cord is enclosed in flexible metal conduit and has four wires (two hot, one neutral, one ground) coming out of it. The wires have already been stripped to 1/2”.

My question: what is the code compliant way to hookup my oven?

While I don’t anticipate needing the move the oven, it’ll be nice to be able to unplug it if I needed to get back in there to clean stuff.

I opened the oven and there’s no easy way to replace the cord with another one that has a plug. So, I can’t easily put in a 40amp outlet on the junction box to plug in the oven. 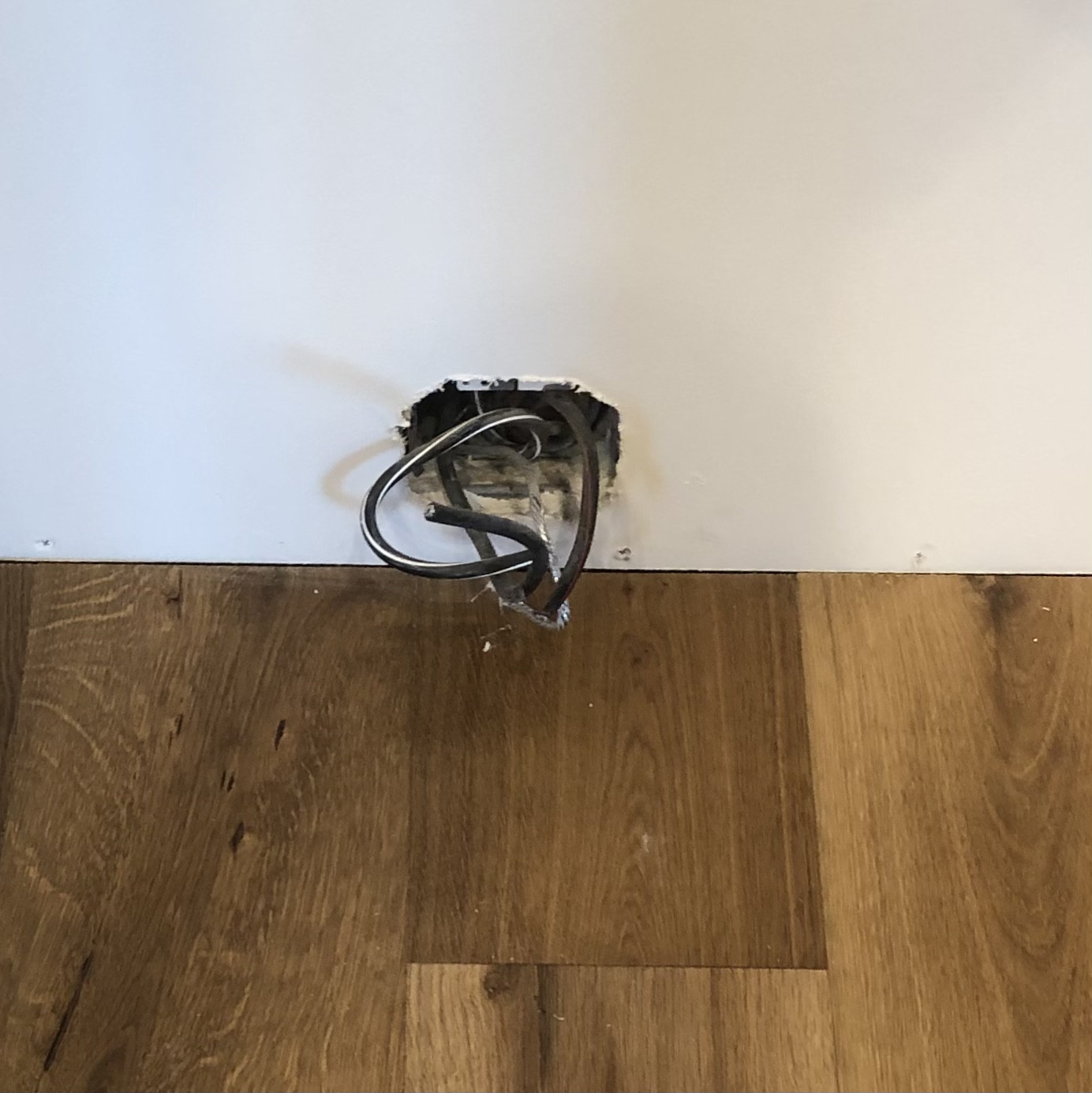 You'll need a right-angle FMC connector, an octagon knockout faceplate, and some MAC-Blocks for this

It looks like your electrician threw an octagon mud ring on the square box they put in for this outlet because they didn't have a square one in the truck at the time. While a bit non-standard, this is not unmanageable, either, as KO faceplates for octagon boxes are a standard item, and should mostly fit on the mud ring in question (using the two larger holes in the mounting flanges). You'll need such a faceplate for this, as well as a right-angled ½" FMC connector to accept the flex conduit whip on your oven, a set of 4 Ilsco MAC-618 MAC-Block™ connectors as the wires from the wall appear to be aluminum(!), a short length of 10AWG bare solid copper for use as a box grounding pigtail, and a 10-32 green grounding screw. Finally, you'll need an inch-pound torque screwdriver in order to correctly tighten the terminal set screws on the connectors.

First off, you'll need to land the 10-32 grounding screw on the back of the box and attach the 10AWG solid copper grounding pigtail to it. You'll then need to use the FMC connector to attach the octagon KO faceplate to the FMC whip on the oven. From there, we can proceed to strip the wires from the wall back about ¾", then attach the MAC-Blocks to them, torquing the screws used to 25in-lbs.

Now, the oven can return to the picture, its terminated whip getting connected to the remaining holes on the MAC-Blocks. The grounding pigtail from the box also gets slid in alongside the grounding wire from the oven at this point, as the MAC-Block can accept 2 copper wires in the same port, but cannot accept copper and aluminum mixed together in one port. The remaining connection screws can then get torqued to 20in-lbs, completing the wiring. Finally, you can attach the faceplate to the box and slide the oven in, finishing our work in the kitchen.

Last but not least, you'll need to head to the breaker panel and fit the appropriate lockoff device for it to the breaker for your oven circuit before buttoning the panel up and turning the oven breaker on. That way, if you need to call someone out to work on the oven, they can flip the breaker OFF then attach a padlock to the lockoff device, keeping someone from giving them a shocking surprise by flipping the breaker back ON while they're still working.

If you can't find MAC-Blocks...

If you can't find the ILSCO MAC-Block (any local supply house that carries Ilsco's products should be able to order some in for you), you can use two-port Polaris™ or equivalent 14-4 AlxCu mechanical setscrew-type splices for the hots and neutral and a matching three-port connector for the ground. You'll also need to use the torque values that come with that connector instead of the ones I quoted above (35 in-lbs for a Burndy BIT4, for instance), and to put the grounding pigtail from the box in its own port on the grounding connector instead of combining it with the ground wire from the oven.

If that isn't satisfactory from a grounding standpoint, you could use a 10-32x⅝" machine screw to attach an Ilsco NBAS-002-1 grounding bar to the grounding hole in the back of the box and terminate both the oven and cable grounding wires there, letting you dispense with the grounding pigtail altogether. (This is permitted by the Exception to NEC 314.28(E), by the way.)

To make a hard-wired connection get a RACO 187, mount box with window horizontal, the 4 holes line up with receptacle mounting holes. Then the metal flex can attach to the the side of the box.

You will need to a breaker lock-off in the electrical panel.

Not the answer you're looking for? Browse other questions tagged wiring 240v oven or ask your own question.