I have a 30 gallon electric conventional hot water heater that started leaking. It is in a cabinet above the washing machine; a tight fit: 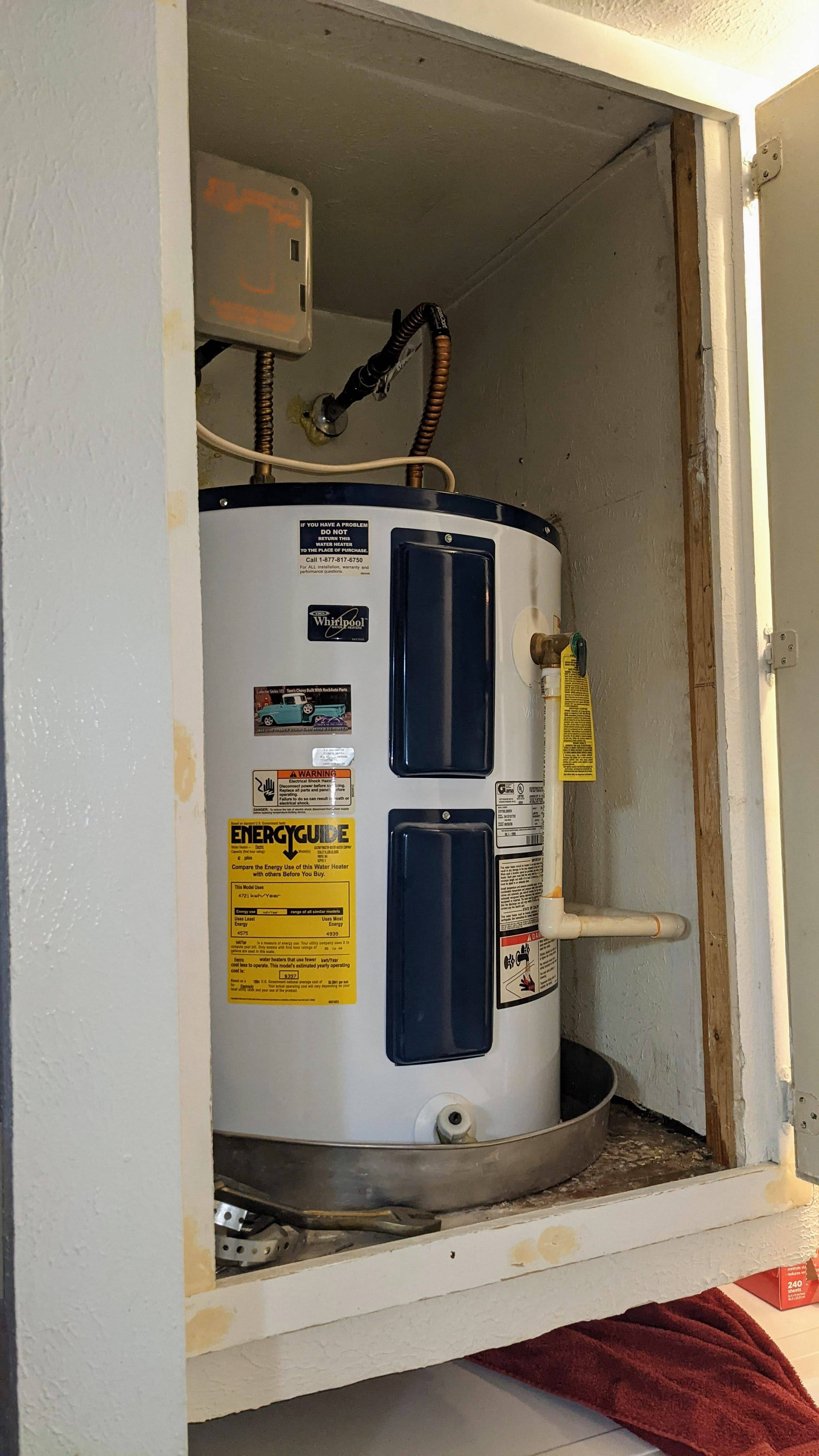 Since it is such a cramped space, I'm considering a tankless unit, to make it a little easier (for the plumber) to replace, and much easier next time when the new tankless goes out.

Current situation: 1200 square foot house, North Texas, USA; 2 adults. From looking at the specs of a potential replacement tankless, looks like a 27 kw tankless unit will fit our capacity needs.

Electrical Service Panel images, labeling is mine through trial and error; The "Main" is wrong as pointed out below.: 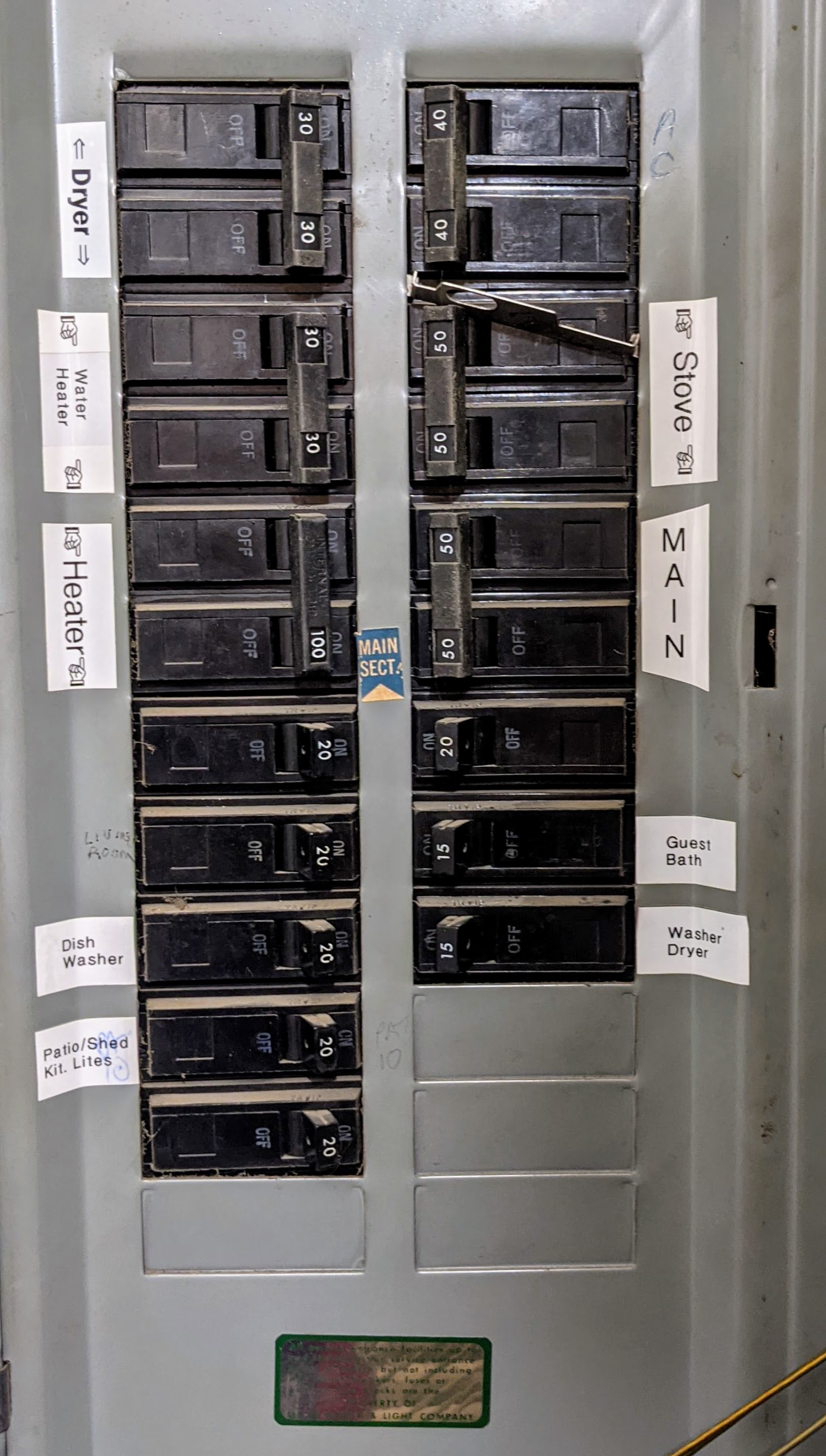 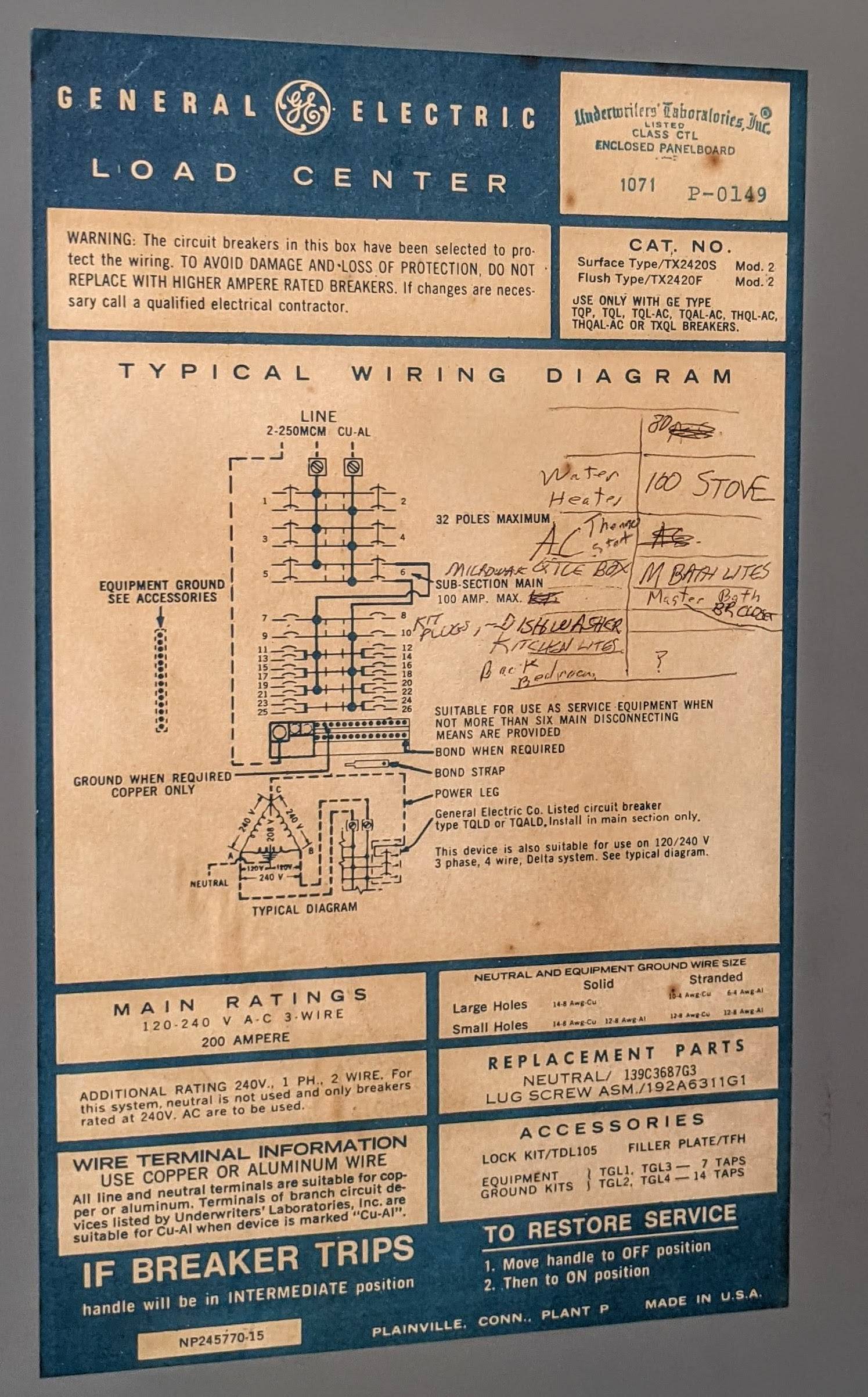 TLDR: Replace house's electric 100A resistance strip-heat "furnace" AND 40A its air conditioning with a 30A wide-range heat pump that does not require emergency heat. Enjoy lower electric bills all year. Install subpanel to allow three 40A breakers to be in the same panel.

An on-demand is a great idea.

And 27 kw is serious enough that your project isn't likely to end in frustration with tepid water, as will happen when they are carelessly undersized. Now keep in mind a few design aspects.

Flow is everything -- when you max out flow capacity, temperature will drop, and the cure is to reduce flow. You can do a lot of good right up front by carefully sizing your loads, e.g. a "low flow" shower head.

That long slug of cold water sitting in the hot water piping is still going to be a problem. All that water must be pushed out of the pipe by hot water: that is the delay you get in the far rooms. Locating a tankless centrally will do nothing to cure that - it will be just as bad, or worse if you use low-flow strategies e.g. low-flow faucets and shower heads.

One answer to this is distributed, smaller heaters. At extremes, the British have "electric showers" where the shower has a built-in on-demand heater right at the showerhead - of 8500-9500 watt capacity (40A), good for a little over 1 GPM, but instant hot water - no waiting. I don't know that I'd go that far, but certainly if your house has 2 or 3 "islands" of hot water use far apart, 2 or 3 smaller units may be worth considering (or even 1 per shower-equipped bathroom + 1 for kitchen/laundry).

You won't be able to go much over 27 kw, unless you "go nuclear" with a 400A service upgrade, in which case limit total water heaters to 48 kw.

That panel has some issues.

It is a "Split-bus" aka "Rule of Six" panel. That means it does not have a main breaker, those 6 large breakers are together the main breaker. That was a trick done in the 1960s-70s to avoid the then-very-high cost of 100A and 200A breakers. However it's a safety problem because those breakers together can draw well over panel rating, and nothing protects the panel. The safety came from the house's original load calculation done at build time, but that totally counts on the load calculation being re-done everytime anything is added to the panel. And real world, that does not happen.

This is not a Code violation because it was legal at the time it was installed... but it's something to take care of if it aligns with other plans. Separate from this, you need additional breaker spaces anyway. So....

That "furnace" is in the way.

What you have now is toaster heaters, and they take a huge chomp out of your available electrical service, to the point where there's no room for 27 KW of on-demand water heater. The only way you can have both toasters and on-demand is to upgrade your electrical service to "Class 320"/400A.

Every possible scenario will cost you a moose-load of money. The question is only how:

Depending on the energy fees and purchase/installation price and possible subsidy programs, a heat pump could be considered. A heat pump for domestic water would save at least 50% of the energy costs, often 60 to 70%. Perhaps photovoltaic (also subsidies available in many places) could help to reduce the total bill, considering in- and off- feed fees. Texas sounds like sunny days.

A tank less heater may save costs because the stand -by losses are very low, and because the anti-legionella heating is not necessary.

But the power demand is huge, most likely the panel needs to be changed.

The power demand for (electronically controlled) water heaters can be decreased by installation of a counterflow heat exchanger at least for the showers ( e.g. see Rob the Plumber videos on YT). In practice, it is 20-50% decrease for showering.

A better answer of the ROI would be revealed by an Excel sheet with all data mentioned above, if the average warm water demand profile is taken into account

I would agree with saving money by not having a large tank. There will be a lot of wasted power when the appliance is not in use. Individual heating as in showers is a possible answer, but you will need a qualified electrician as I am sure you will need a new consumer unit with individual trips so any problem would not leave you without power. It would need a very large amount of power as three or four water heaters could be in use at the same time. Depending on how you use the hot water (sinks,basins and baths etc ) In my opinion I think you should stay with a new tank, it should be cheaper than dealing with new consumer units and massive power you will need available for separate units. It would be a quick and suitable answer : you may not need a tank so large ?

I am not sure how the water is heated , but you could easily have a second immersion to boost hot water with quicker results. You could also have a timer so the hot water would not be needed when you were not in. My parents had a similar system with just one fast water heater below the kitchen sink in a cupboard below.

Not the answer you're looking for? Browse other questions tagged water-heater tankless or ask your own question.