I recently replaced 3 incandescent BR40 light bulbs (recessed) with eco smart brand LED's. Shortly after doing so we noticed all 3 simultaneously occasionally, but not regularly, flicker off when the switch is on (just 1 quick flicker - kind of like a flash).

The stove is not on the same circuit as the lights. The lights are in a bedroom on the opposite end of the house. To make things more confusing, there's a second set of LED lights (eco smart R20's) in the same bedroom (wired to the same box as the other set but they have their own switch) and they do not ever flicker at all.

I've went as far as to completely replace the dimmer with a standard light switch but that hasn't helped either.

I also do not think the issue is directly related to the stove but rather just a big draw of electricity causes it, though this is the only set of lights that flickers.

The flicker is when the lights are on. No issue if lights are off. The bulbs themselves aren't the issue, they don't flicker anywhere else so I've pretty much ruled out the bulbs and switch/dimmer as potential issues.

In the photos below the problematic lights are wired to the switch on the left.

Any ideas? Thanks a lot in advance! 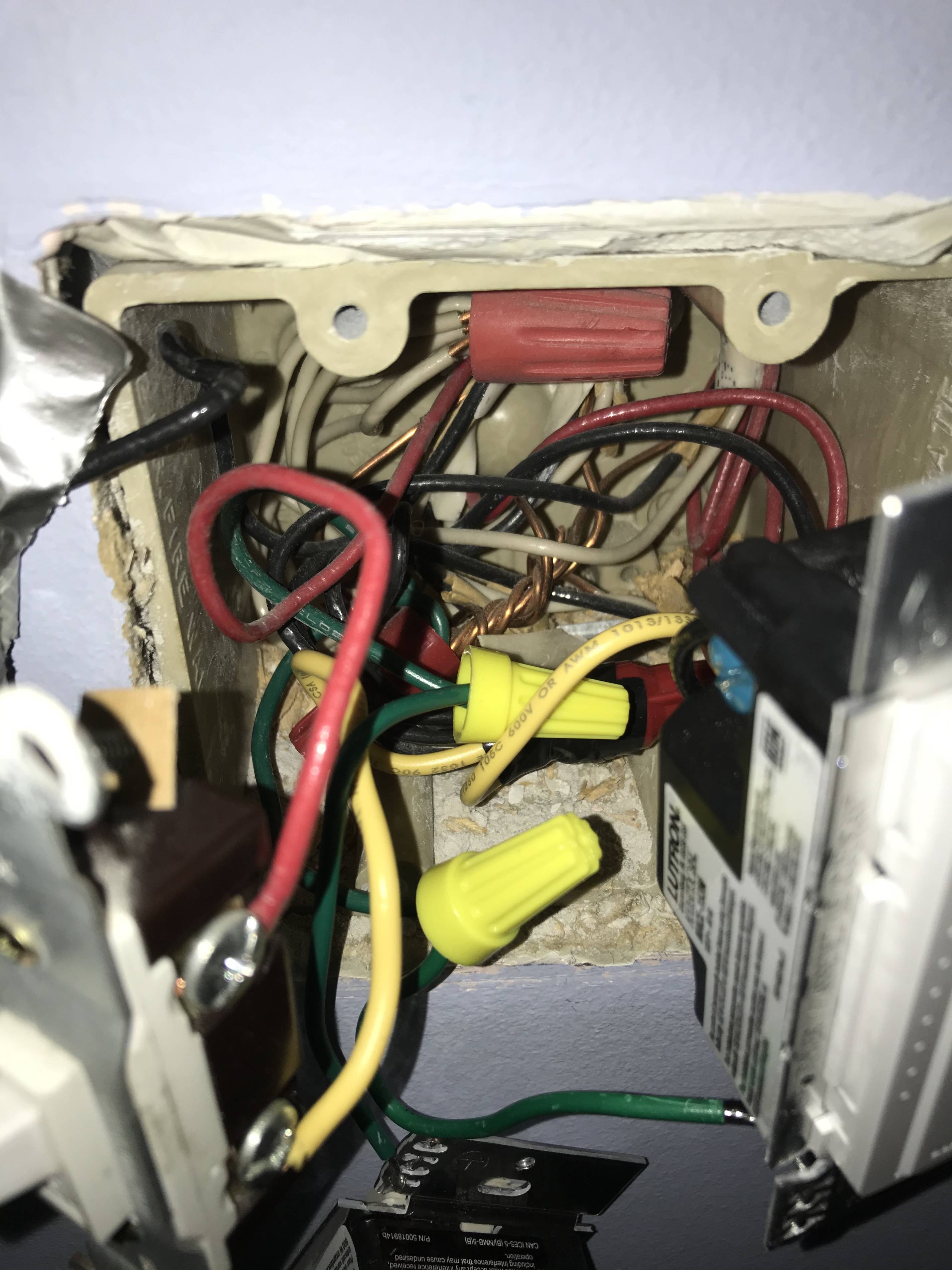 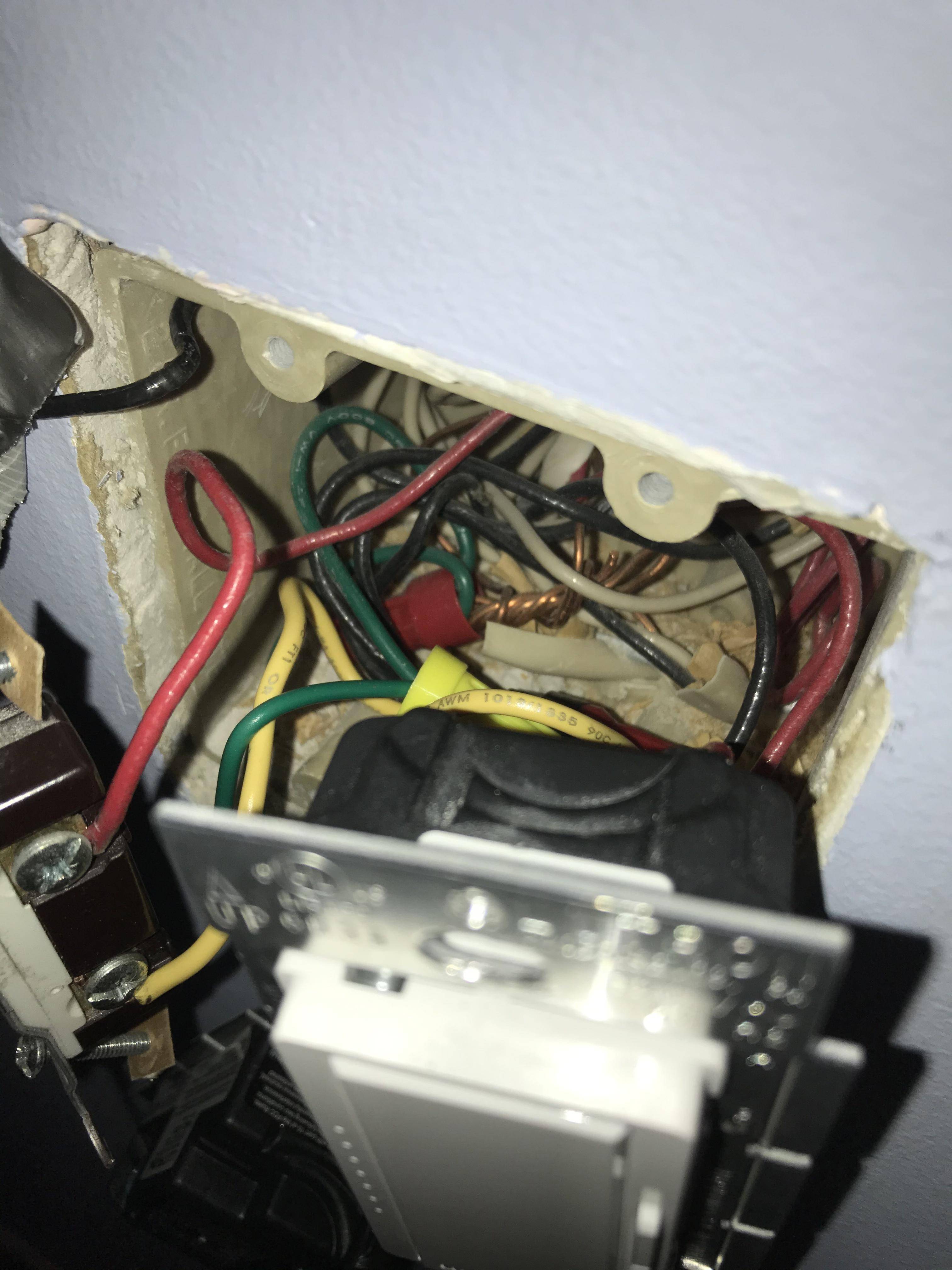 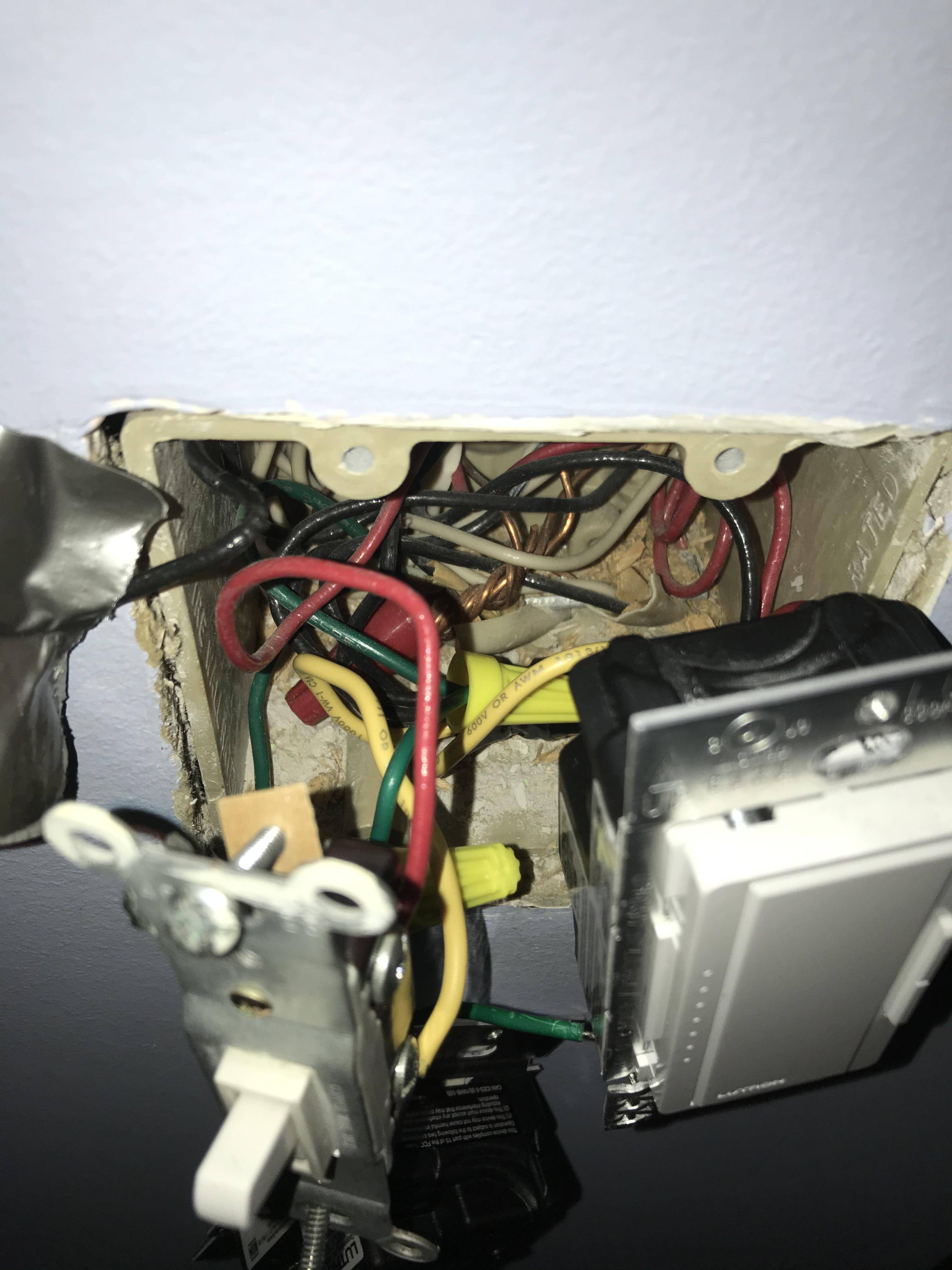 This is likely the result of line noise AND a poor dimmer circuit on the LED bulbs. Cheap dimmers will watch the AC waveform and time peak waveform voltages to divine what level it should be running at since even at way dim, the bulb actually still gets more than enough power to run full-blast.

A spike/drop that cancels or delays the expected 120th/sec voltage peak fools the bulb's timer into thinking a new AC phase control waveform (what a dimmer switch does) has been commanded, so it dims, only to "figure out" it's mistake soon thereafter.

A better way to determine brightness, a technique used by better dimmable bulbs, is to voltage divide the line (with high-ohm resistors) and feed that into an RC lowpass filter. This results in a stable low-voltage DC average of the waveform's available power. That signal level is then used to determine how much DC current to provide the LEDs to achieve a brightness. When a good bulb runs too long of a sample because they used a large filter capacitor, it lags, but too small a capacitor and it flickers/blips, so there's a balance there, and different models use different strategies to varying success.

It is not clear if that flickering occurs when the lamp is switched on or off.

The one-shot flickering - when the Lamp is switched off - with a period time of seconds to minutes is often simply caused by wires running parallel.

If a LED lamp is switched off, still some current can flow through the capacitance between the wires which are inevitable with the usual power cables.

A lamp switch or a dimmer is some kind of bridged by those between - wire- capacitors.

This is a very tiny current, which also flows through switched-off old style incandescent bulbs. But no effect is visible, no low frequency flashing is possible, since these bulbs can not store energy.

But some LED drivers have huge capacitors - elcos- for smoothing out the rectified net voltage.

The tiny currents in switched- off state will slowly accumulate in those elcos. If the voltage is still low enough, the driver electronic can not start working. But if a certain threshold is reached, the electronic starts working and thus discharges the energy stored in that elco in a short flash of LED light. Now the elco has much less charges or is even empty and the cycle starts again.

Especially lamps which can be switched from different switches have a higher probability to produce these flashes, since there are more parallel cables involved. F.e., between 2 switches 3 wires run, of which one is always hot, another wire is directly connected to the switched-off lamp. Even if switched off, some tiny current flows between the hot and the floating wire.

A flickering when the lamp is switched on would most likely be a defect LED bulb which should be taken/sent back to the seller under warranty.

Other possibilities for flickering when switched on: If other devices produce spikes in the net, the current through the LEDs could drastically increase. Many LED bulbs have simple "capacitor power supplies". There is a capacitor in series with resistors and the LED diodes. A capacitor will decrease its resistance, when the frequency increases. Spikes, which could be produced by motors in pumps, compressors (refrigerator, heat pump), drill machines, vacuum cleaners, garbage disposals, etc. and/or devices with triac power phase controls consist of high frequencies.

The capacitor in the LED power supply is only meant for 50/60 Hertz and will increase the current during the spikes for 2 reasons: higher voltage and higher frequencies, which will result in fast flickerings.

Motors and phase controls have filters to suppress those spikes, but those filters could fail or could be missing in old/cheap devices.

The spikes could be effective only in some places of the network, since a domestical power net is a very complicated network for high frequencies >> 60 Hertz. The grounding of a domestical power net should be realised in one and only one central location, f.e. near the incomer supply line from the power supply company. If a desktop PC is connected to a HIFI Stereo set with a FM-tuner, a loud 50/60 Hertz humming noise could be heard, which disappears when the cable from the tuner to the socket for the roof-antenna is disconnected. This double grounding is a huge loop (like a secondary winding in a transformer), which could be also produced by double or even multiple connections between Ground and Neutral. That ground loop(s) could be antennas for spikes which could be a reason for the LED flickerings as well resp. could increase the probability for flickerings.

Just to mention a trivial reason (switched on case): a loose contact ( f.e. backstabs) could reduce the voltage for the LED below the operating voltage range ( f.e. 90 to 250V). A voltage measurement would yield different voltages for on/off.

Also an incandescent bulb could reveal the loose contact by different brightness.

Of course, safety first in all works, especially when the lamp circuit has to be (temporarily) connected with an extension cord to accept the hair dryer.

LEDs are notoriously sensitive to voltage variations...they react INSTANTLY to a short drop in voltage, like a heat pump kicking on, Electric range, pump, etc. Compare that to the old incandescent bulbs with a filament that had to cool for a bit before they would exhibit a flicker due to a very short voltage drop. This is the brave new world, we're gonna have to live with it.

1
New LED flood lights give off quick flash when turned off
3
Flickering lights
7
Why are my some of my LED lights flickering?
2
Flat Iron Causing LED Lights to Flicker
2
Replacing two 3-way dimmer switches with two non-dimmer 3-way switches
1
Why do LED lights get brighter when adding additional lights to the dimmer circuit?
11
Why do LED Lights Flicker on Low Dimmer Setting
1
Occasional light flicker, how to find source of issue
5
LED lights constantly flicker when heat pump is running