Clean sticker paper residue off of a wall

This problem is on a wall in my bedroom. I used to have a A3 paper sized photo stickers on my wall. After a year or so I tried to remove the sticker from the wall and it left lots of sticker paper remains and adhesive residue on the wall. I tried to scrape it off with a scraper but it didn't work.

I went to a hardware store and told the guy working there of the problem I have and he told me to buy a sheet of sandpaper and a bottle of thinner. As per his advice he told me that I had to apply the thinner on the wall and scrape it off with the sandpaper. Though it didn't seem logical to me, since he was much older than me, I thought maybe he's got experience with this and there's no harm in trying this out so I bought the thinner and sandpaper from his store. On coming home I tried doing as he said but it ended up looking much worse. (See image)

I got busy with work and it i did not get back to addressing the problem.

Today I found this community on stack exchange and I was thinking, surely the people here would have much more experience than me so I thought I'd ask here.

Is there any product or method to remove the paper mess and adhesive residue from the wall without damaging the paint?

Edit from orginal-poster: I read in the comments that someone was mentioning a product called GooGone. But we dont have that in India. If you could give me a kind of name/product to ask at the hardware store it would be helpful. Thanks. 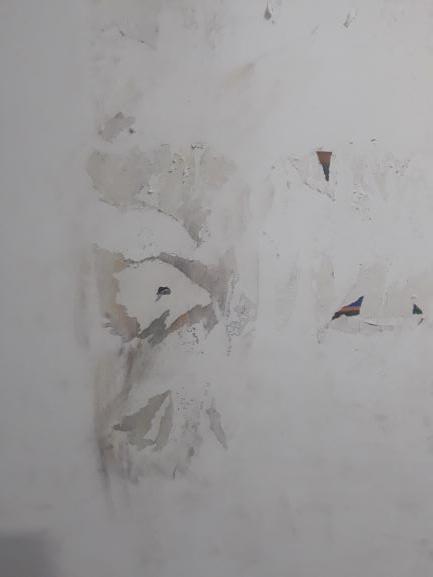 Try apply heat to the glue with a heat gun, or hair dryer. If it is on drywall, don't over heat, just scratch the softened sticky material, and clean with gentle wipe with damped clothe.

Not the answer you're looking for? Browse other questions tagged bedroom wallpaper or ask your own question.

5
Should I apply lacquer over a wall papered with book pages?
2
How can I remove a dado strip of wallpaper without damaging the wall?
3
Priming new wall before wallpaper
2
What steps do I take to painting a brick wall mural?
1
Can I avoid plastering after stripping the old wall paper
0
What do you think this odd layer under wall paper may be?
0
How to remove waves from ceiling and paper from walls [picture]
1
How to repair damaged lining paper for painting?
1
Removing wallpaper on concrete wall and prepare for paint
1
Tiny bulges on wallcoverings made of paper and not vlies/vinyl