Techniques to wrap the innards of electrical switches and outlets with electrical tape?

In the comments section of this question, MacGuyver's distant cousin MacGuffin recommended wrapping the innards of electrical switches and outlets with electrical tape to avoid any accidental shorts.

I think this is a great tip. But the innards of electrical switches and outlets are often not exactly the type of shapes conducive to being wrapped with electrical tape.

What technique is recommend to do this? A photo or two would also be most appreciated.

There is no need for tape inside a device box except perhaps as a wire colour marker (phase taping, etc). Outlets, switches, device boxes, cable, clamps, breakers - all of these devices have clear and specific installation methods that ensure they perform to the safety standards against which they are tested. Hacks like this do not count themselves among those methods.

If you're tempted to put tape in a device box to stop electricity from going somewhere, it's because there is something else in the box that is done wrong, and tape is never the correct solution.

If the wires or insulation are damaged they must be replaced. Tape is not allowed. If I open a box and see a taped device, the very first thing I do is remove the tape and inspect the job hiding underneath because tape inside a device box does tell you one very important thing - that the person who put it there in the first place didn't even trust their own work. And you shouldn't either.

Tape is a band-aid solution. For applications where you would use it to repair insulation it is not allowed by code anyway. Neither code nor device manufacturers require or even recommend that you to wrap tape on outlets, switches, wire nuts, or any other part of anything inside a device box other than for identifying wires.

3M Super 33 is probably the best electrical tape you can buy, and it comes with a 5-year shelf life. If 3M doesn't give it more than 5 years on the shelf, you can be guaranteed that it won't last that long in service. Tape eventually fails - it is not a long term solution and it is not suitable for permanent installations.

If you are going to do it you go 3-4 times around the outlet so it covers the metal and doesn't slip off. Also do not use the cheapo stuff that comes in at $2 for 5 rolls. 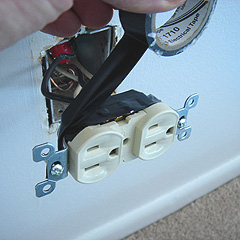 This shouldn't be a common thing. I do it only when using smaller metal boxes and the side screws are very close to the edge or touching to prevent arcing. If you are leaving too much copper exposed you need to install your outlets better not add tape.

Addendum: There are only certain uses for doing this method. As mentioned in comments I would do this when installing on very small (some older metal work boxes barely hold an outlet), a GFCI in a smaller box or when adding an extension.

Example is you have a small metal work box and if you do everything right you have 1/8" of play. Fine don't put tape on it. It works fine. Then Big Johnny plugs in his monster surge protector with its big ass 3-prong cord and it barely fits in the outlet. Well couple months later Big Johnny wants to move his electronics and he is a clumsy/strong SOB and he wiggles on this thing hard to unplug it.
Well now the outlet screw has loosened and there is a "live" screw touching the metal box.

I have had lots of rentals. I have taped outlets, my units are safe and I have never returned to a house, opened up an outlet and saw tape dangling or charred.

Let's get real here would I rather have brand new wiring and bigger work boxes. Well yes. This is the kind of debate that you have about highway speeds. Why don't we just travel at 30 mph max on the highway. There will be hundreds/thousands less dead a year. However the fact here is the tape could possibly save many people from injury (switched outlets, wrong breaker thrown) vs having no tape.

Again limited use cases but in no way can you convince me that no tape is safer.

No tape in permanent installations!

Electricians look at tape wrapped around switches, receptacles, and wire nuts as an amateur tell. I agree it's a bad idea around a wire nut, but I am in the minority that feel it's a good idea around device screws.

If someone ever wants to remove the device from an energized box - which there's very, very seldom a good reason to do - who ever takes it out hot will think highly of who ever wrapped that device. You don't have to play a high stakes game of "Operation" with a 277 volt switch.

But there's a much better reason. When you fold up the wires to close up the box, if you're careful, you can keep the bare grounds from touching the terminals and everything will be fine. Except when one of those bare wires doesn't cooperate, and wiggles its way into contact with one of the terminals. It shouldn't happen, but it happens all the time.

If it winds up making contact with the hot terminal, the short will immediately trip the breaker, you'll fix the problem, and life goes on with just a little wasted time and effort.

If it winds up touching a neutral terminal, you could wind up closing up and leaving a ground fault. A GFCI will catch it, but you may have a headache finding it if you did other work at the same time.

If it's just a hair's breadth away from the terminal, it may not create the fault until the switch is switched a few times or cords are plugged a few times, wiggling the device just enough to touch the bare wire. Sometimes it will even create an intermittent problem with an AFCI or GFCI protected circuit and that can waste a TON Of time. When you drive back repeatedly to chase your tail on this problem, whether you're doing it for free under warranty, or doing it for an irate customer paying for you to run in circles, you can hold your head high, you're a pro and you don't wrap your devices.

So I go against the grain on this, I think it's OK to wrap your devices with tape. As mentioned in another answer, don't use junk tape. The only ones I have seen with the necessary stretchy-ness is 3M brand 33 or 88. Apply a little tension when you wrap and these will form nicely around the bumps and etc.

The only problem with tape, besides the disdain of misguided professionals, is the mess the residue makes. Ideal Industries has a new product that solves this, Armourband: 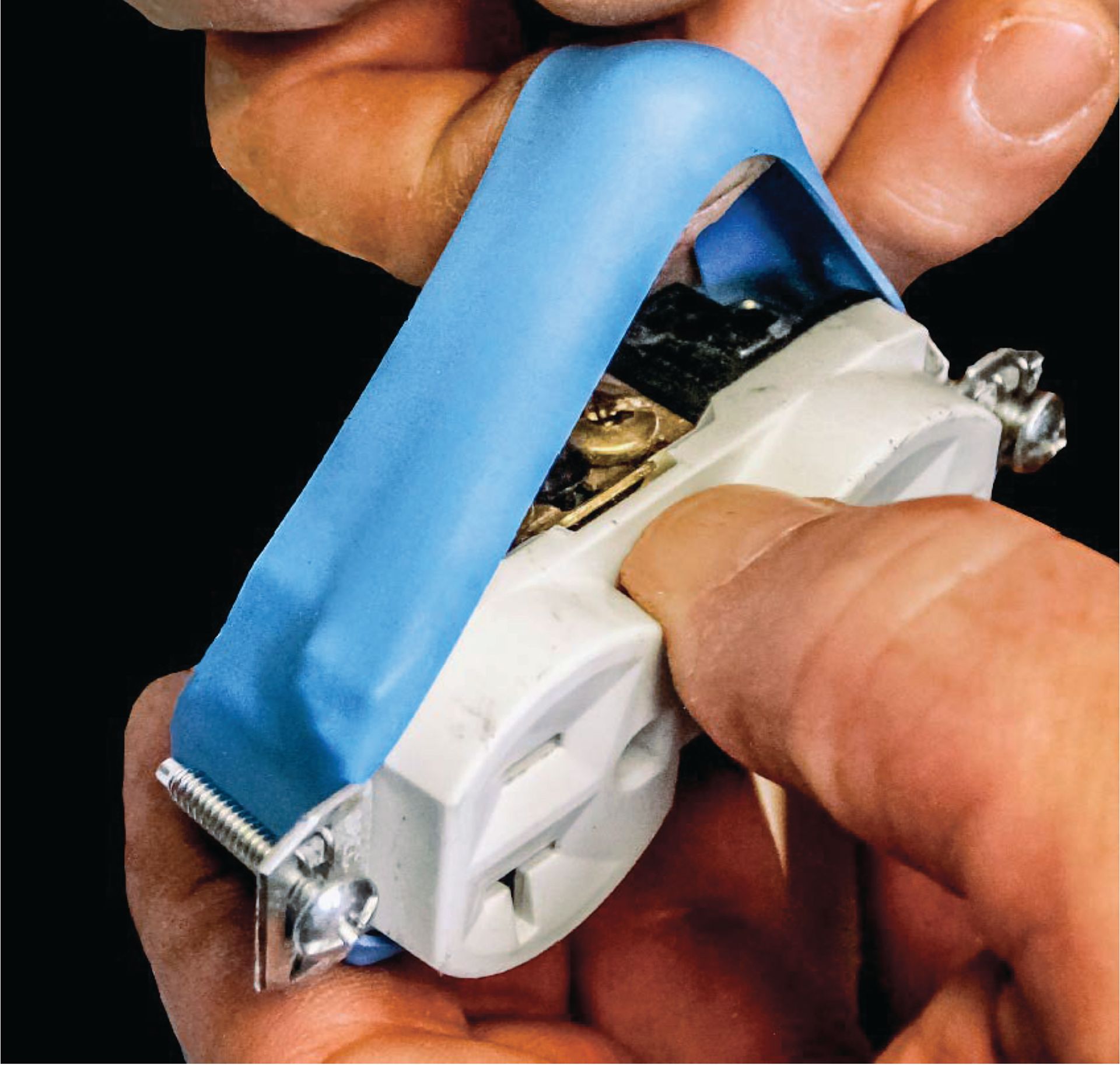 It's a broad flat elastic band that stretches around the device to protect the terminals. So if tape residue is an issue for you, there is an alternative.

6
How do I keep a GFCI outlet with tight clearance from shorting inside a steel electrical box?
4
Why are ground wires sometimes not insulated?