Do I need a floor drain for the water heater in my townhome?

I’m looking at replacing an 11-year-old water heater as the hot water has become extremely discolored recently. I have flushed it twice in five years (I know, not enough) and could never remove the anode rod to check it, much less replace. A failed expansion tank also had to be replaced once it was determined that the pressure regulator had also failed (85 psi at the washing machine).

This is in a townhome on a slab that was built in 2000, and it does not appear to have any type of floor drain in the laundry room where the heater is located. The AC in a neighboring closet has a condensate pump. I have searched images of neighboring homes on real estate websites, and it doesn’t look like any of those homes have floor drains either. The current water heater was replaced around 2010 and - based on the (poorly) replaced flooring in the laundry room - probably experienced some type of leak. I want to replace this one before the same thing happens as the damages would be significant for myself and the neighbor.

However, I can’t determine what to do about a drain. I was already planning to replace the stand with one that is the proper height and add a drain pan beneath the heater. Is it required to add a drain to bring it up to code (Raleigh, NC)? How am I expected to do that when the home is on a slab? I have only come up with two options:

I don’t know if either option is allowed. Option 1 is the easiest, but there is also some risk if there is a power or pump failure, or if the pump can keep up with the leak. Still, it’s better than nothing. For Option 2, I’m not sure if any code would prevent adding a drain line on the inside of a wall running behind appliances. I’d also rather not drill a hole in a brick exterior wall where the utilities are located. It would also be next to the dryer vent and would drain onto a concrete slab and downhill into an adjoining neighbor’s backyard. Of course this is only for an emergency, but I don’t want to create a bigger problem in the process. How do homebuilders get away with stuff like this?

Does anyone see any other issues that I could potentially face with the heater replacement? I was considering going with corrugated flex lines on the inlet and outlet since it will be such a short transition to the PEX. I believe there is supposed to be 18” of line between the heater and PEX. The additional height from the stand will make things a bit tight. I know the expansion tank will have to be mounted to the wall if I go that route. 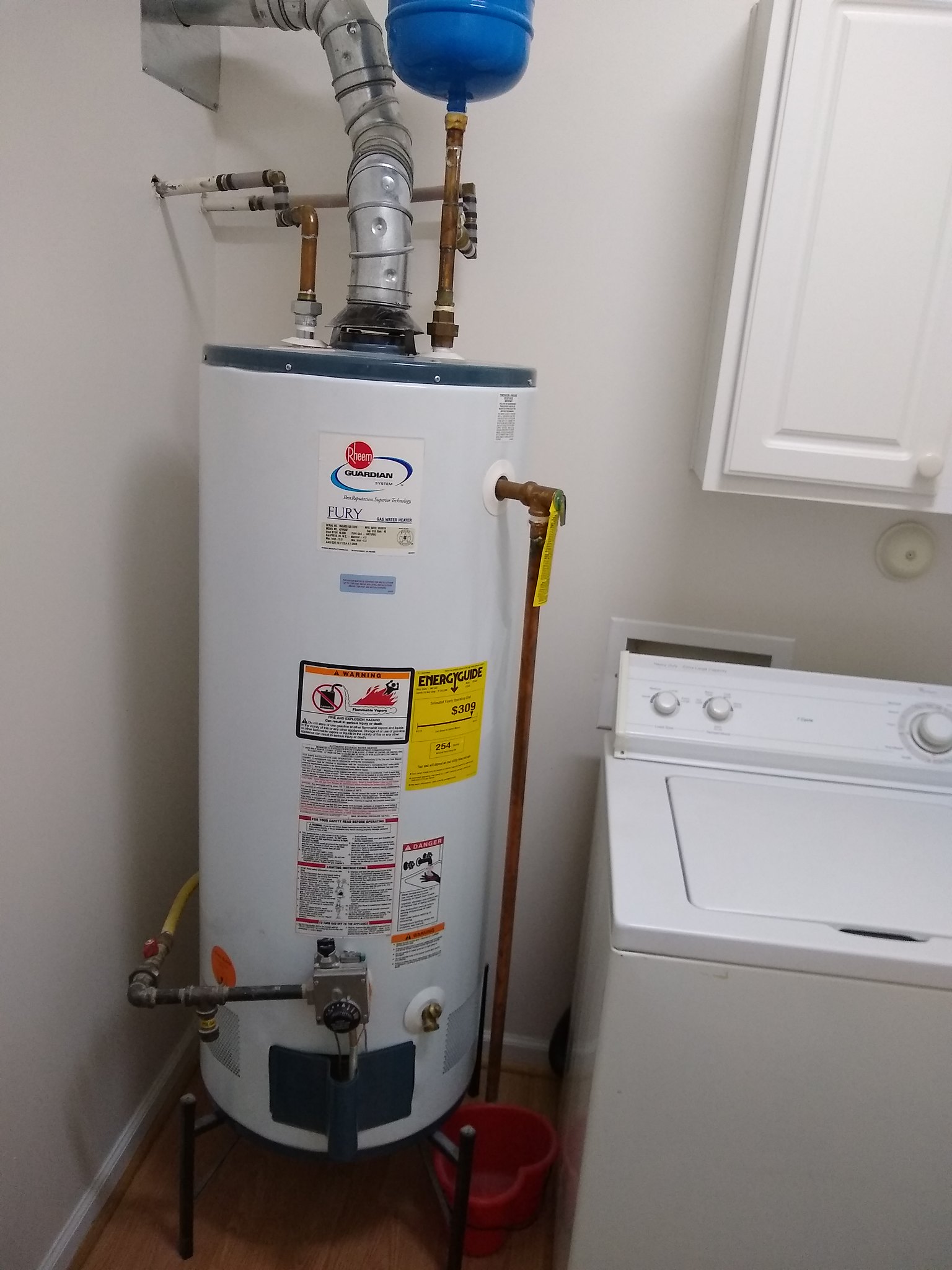 I am currently running a 1995 rheem gas water heater. I've flushed it once. I've never replaced the anode.

I installed a floodsafe water detector shutoff solonoid so that if a leak on the floor occurs the cold water supply is shutoff from the hot water tank.

I have a floor drain which goes to a plastic sump basin with pump that is embedded in the slab.

I put a piece of weatherstripping on the bottom of the interior side of the door so that water won't flood out of the utility room. My walls are concrete board and the floor is concrete.

I am thinking about replacing mine but should it fail in the meantime it shouldn't be too terrible.

A reasonable fix for you might just be to drill a 4" hole through your slab into the drainage layer below the slab which should be gravel. Add a floor drain cover and call it a day (unless you live in a high radon area - even then with a gas hwt you are likely pulling enough air out of that room ). Add the solonoid shut off and choose waterproof materials for that room (turn it into a pseudo shower base) so the water doesn't migrate out of the room and can drain out through the hole you punched in your slab should it fail.

Not the answer you're looking for? Browse other questions tagged water-heater drain code-compliance hot-water pex or ask your own question.