How to fix a joist that has been cut out

I’m doing renovations in an old kitchen. I removed the ceiling as it was damaged, old and nasty. I found that when some prior owner renovated the bath above, they cut into the joists to add plumbing. The cuts are minor to cut right through in places. They did a poor job of attempting to scab a 3 foot section of 2x8 for support on one joist (the cut through one) and nothing on the other 3 joists. ( I guess I shouldnt worry, they only installed a large tub above the 4 joists they compromised!!!!)

Four joists have been compromised.

What I am looking for is a solution to re-support them.

My initial thought was to build a header that would run below the 4 joists that would be supported by two studs on each end (there is a door in the wall below this point, so I couldn’t have studs all along the header). I’d prefer not to do this solution as the header would cause problems with cupboards.

My other thought was to remove the plumbing, scab 6 foot lengths of 2x8 to the existing joists using bolts then add the plumbing back in. I’d still have a concern with this as 4-5 inch holes would still be needed for the toilet drain. What if I were to scab 2 2x8s on each side of the joist?

Hopefully the pictures below will help show the situation.

Any thoughts would be appreciated. (The wiring will be removed and done right!) 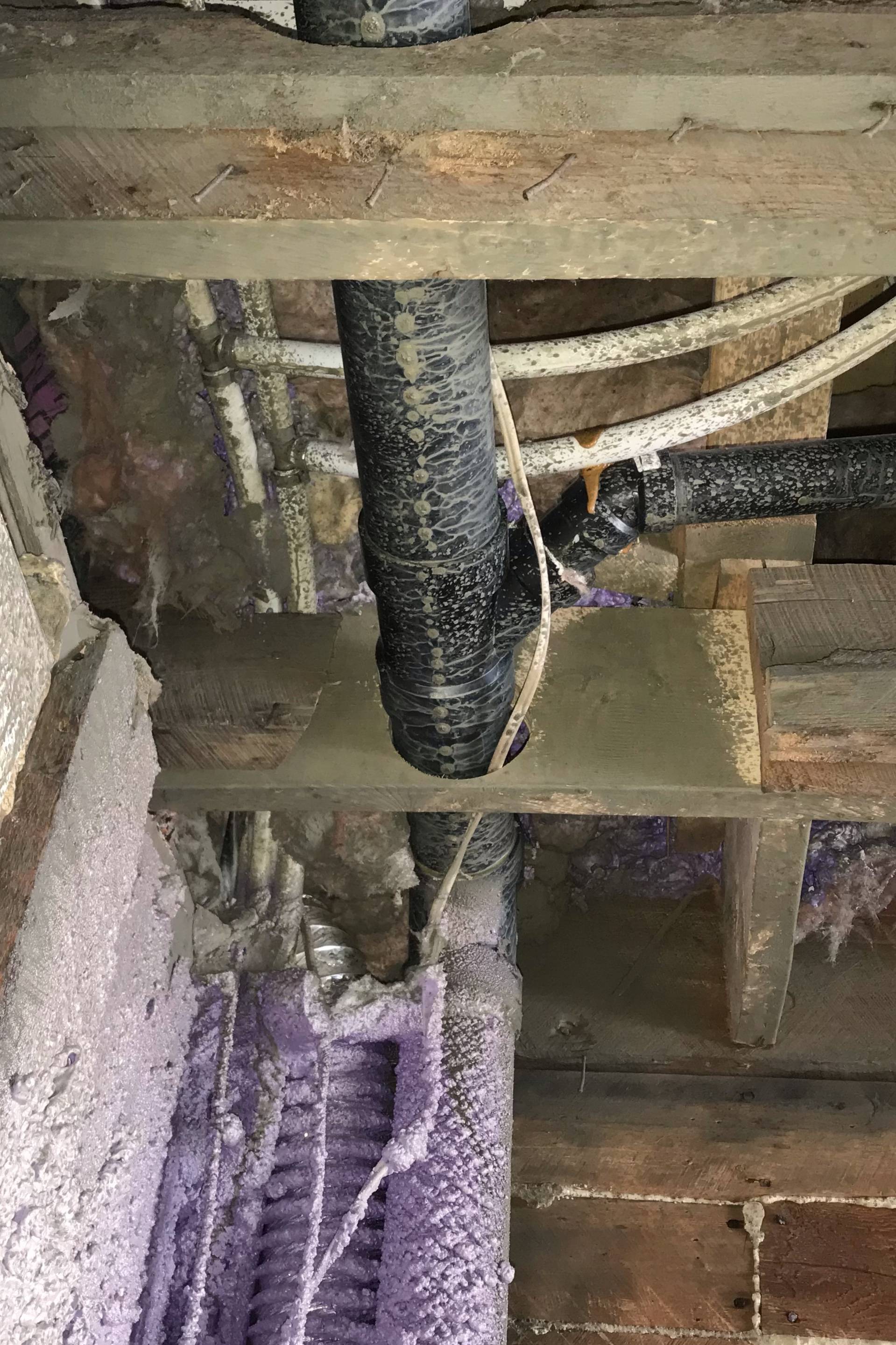 Solution depends on what the other joists look like. The joist before the one that has almost nothing left at the bottom could be ok.

The typical thing to do here would be to cut the joist that has nothing left, double block between the two side joists and sister those two sides joists so they are doubles and pickup the load from the cut joist. The cut joist area then just becomes an opening in the floor structure.

You could certainly build a wall with a header below to support the joist past the cut area. Height of header depends on span and if you are putting a door below it you are limited with door heights.

An structural engineer could probably prescribe something simpler. I had a somewhat similar situation with 18' overspan joists and they were able to prescribe 3/4" ply on each side 18" past each edge of the cut. My joist had a notch at the top but was mid span so the loading and stresses are different than your case.

I wonder if you could do something similar but girdle the joist and have the new joist scabs extend down an additional 3" and block the inside of the girdle. You'd loose 3" of ceiling height for the girdle area but if you are putting up upper cabinets in this area you could probably just custom make the cabinets or have some kind of crown trim detail to hide the lowered portion or if this is a limited room just have the ceiling in this one room slightly lower.

Any solution outside of a support wall or doubling would require a structural engineer.

Not the answer you're looking for? Browse other questions tagged plumbing joists or ask your own question.

2
Support for Tile floor
3
Will my existing deck support the weight of a new hot tub?
16
Contractor cut joist hangers to make them fit
0
How to strengthen two joists that have had big sections cut out to make space for roller garage door
42
How to reinforce a joist with plumbing running through it?
0
Sistering a joist with no space on any side
6
How should I repair this floor joist that is too short?
0
How much can I plane/cut off of a deck joist / rim joist