How safe is it to keep and use a mildly corroded hot water valve?

We have a bathroom faucet (a couple years old), and the hot water side began to drip from the faucet (i.e. it was as though we were unable to shut off the faucet completely). Until I had a chance to replace the cartridge, I turned off the valve for the hot water under the sink. The valves look mildly corroded (photo below), and when I turned it off it did feel slightly stuck at first to start turning it, but after that point it turned fine, and it shut off with no problem.

Now, before repairing the faucet and ultimately turning the valve back on, the question has come up of whether turning it back on could end up being a problem, out of concern for us doing a non-emergency repair possibly then necessitating an emergency plumber visit: That is, since it is corroded, might turning the valve back on, or on and off at different points in the repair job, cause the valve itself to leak? How concerned should we be of a risk for such a leak in this sort of situation? And would the concern be for a large leak or a small one and only if it’s in the on or off position or always? 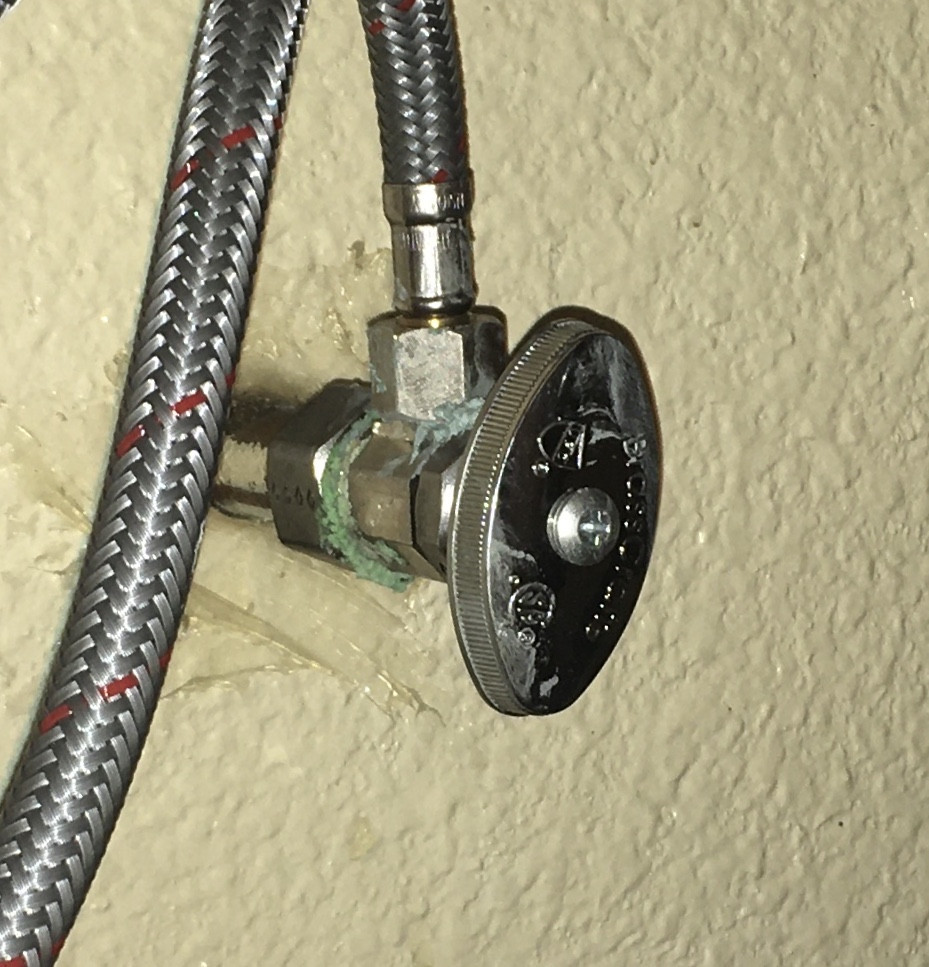 There is a decent chance that the valve will begin to leak where the stem passes through the packing nut/gland. Not uncommon at all and you will need a bucket to contain the water until you can get the supply shut down upstream. Sometimes it sprays everywhere until you can wrap a rag around it. Sometimes the leak will stop when you either open fully and "back-seat" the valve, or when fully closed.

You already know the valve won't give a tight shut off, why not change it out right now while you are in there working. Install a high-quality 1/4 turn valve.

That greenish corrosion is probably due to a small leakage at the connections. I would try to tighten the compression nut just slightly and also tighten the compression nut on that flex line. You could take a soft brass wire brush to remove that greenish stuff. The way you explained the operation of turning off that valve is how those valves normally work or at least how mine work. Just make all the connections are tight.

Not the answer you're looking for? Browse other questions tagged plumbing faucet valve or ask your own question.

1
Hot Water stopped working in Kitchen Faucet
0
How to shut off water coming from the hot water heater
6
Why does shutting off cold water valve to the water heater shut down cold water in entire house?
0
Shower Tub Valve leaking from behind cartridge
0
No hot water from kitchen faucet yet there is still water flow through hot water valve
0
Reduced hot water pressure after closing and reopening water supply in one upstairs tub
1
How to diagnose single tub faucet with no hot water?
2
Hot water to bathroom sink slows to a trickle after shutting off valve for a moment