I am a complete DIY novice so please bear with me!

I live in a house built in 2019 and got someone to mount a 45" TV to our bedroom wall which is interior drywall. The TV has stayed up for almost 1.5 years without issue.

After changing/rearranging the furniture in the bedroom it was now off centre to the bed so I decided to remove that TV and bracket from the wall and replace it with a new wall bracket for a better 49" TV I have. The bracket needs to go on the same wall - just in a different position.

The wall does sound hollow to varying degrees when I tap it so it seemed obvious I would be mounting into studs. Using an electronic stud finder and magnets I am able to find the first 6 studs 16" apart from the side of the wall coming inwards as expected, there is then another stud only 8 inches apart. Then after that (in the space I want to mount the TV - typical) I can't find anything. My electronic stud finder can't find anything and the magnets don't attract to anywhere. Not sure if significant but there looks to be a supporting beam running perpendicular to the wall at the point I can no longer find any studs. 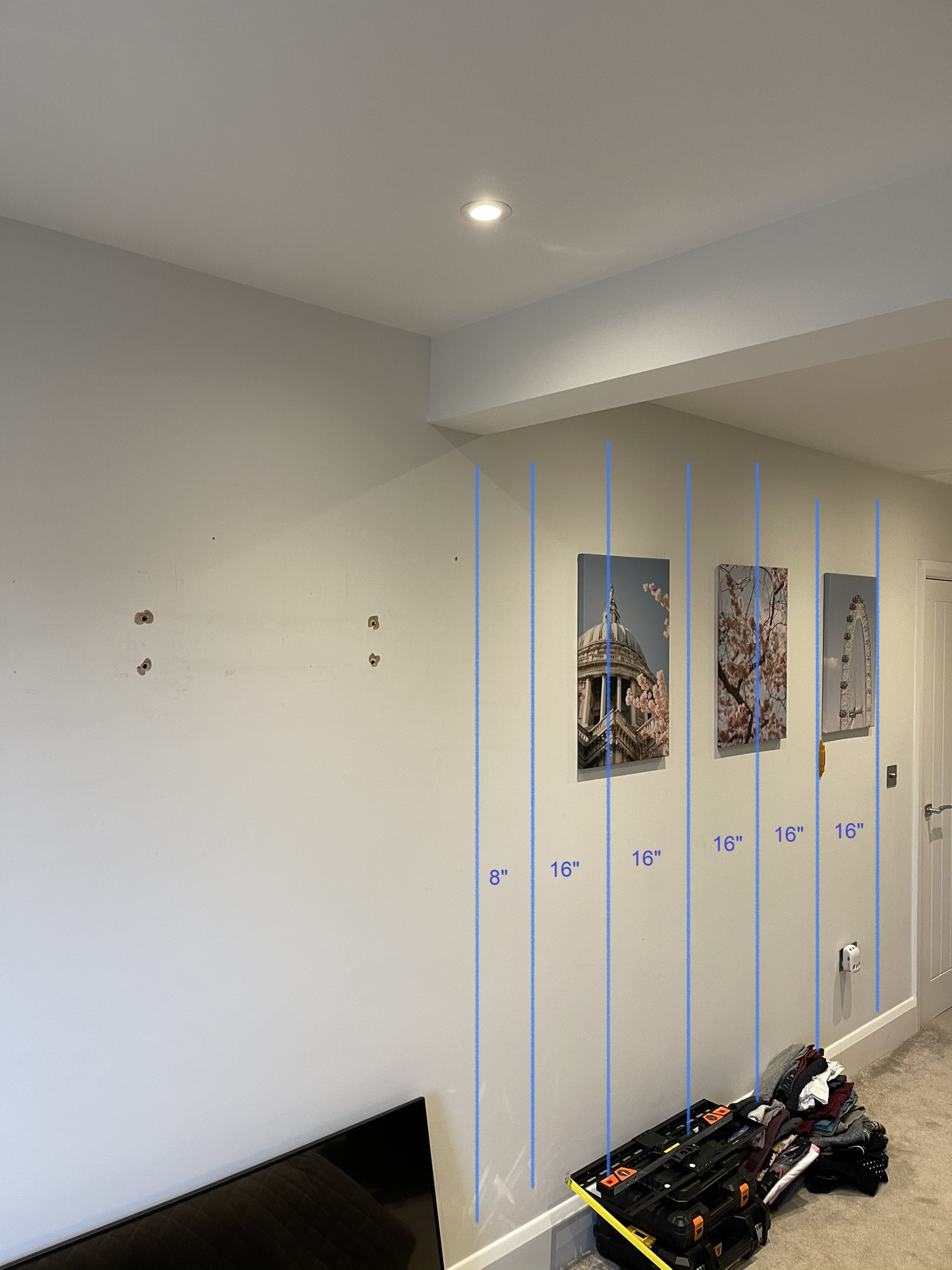 Looking at the way it was mounted originally the holes drilled don't appear to be going into any studs and I don't recognize the fixings as drywall anchors (as I said I'm a novice so could be completely wrong here!). 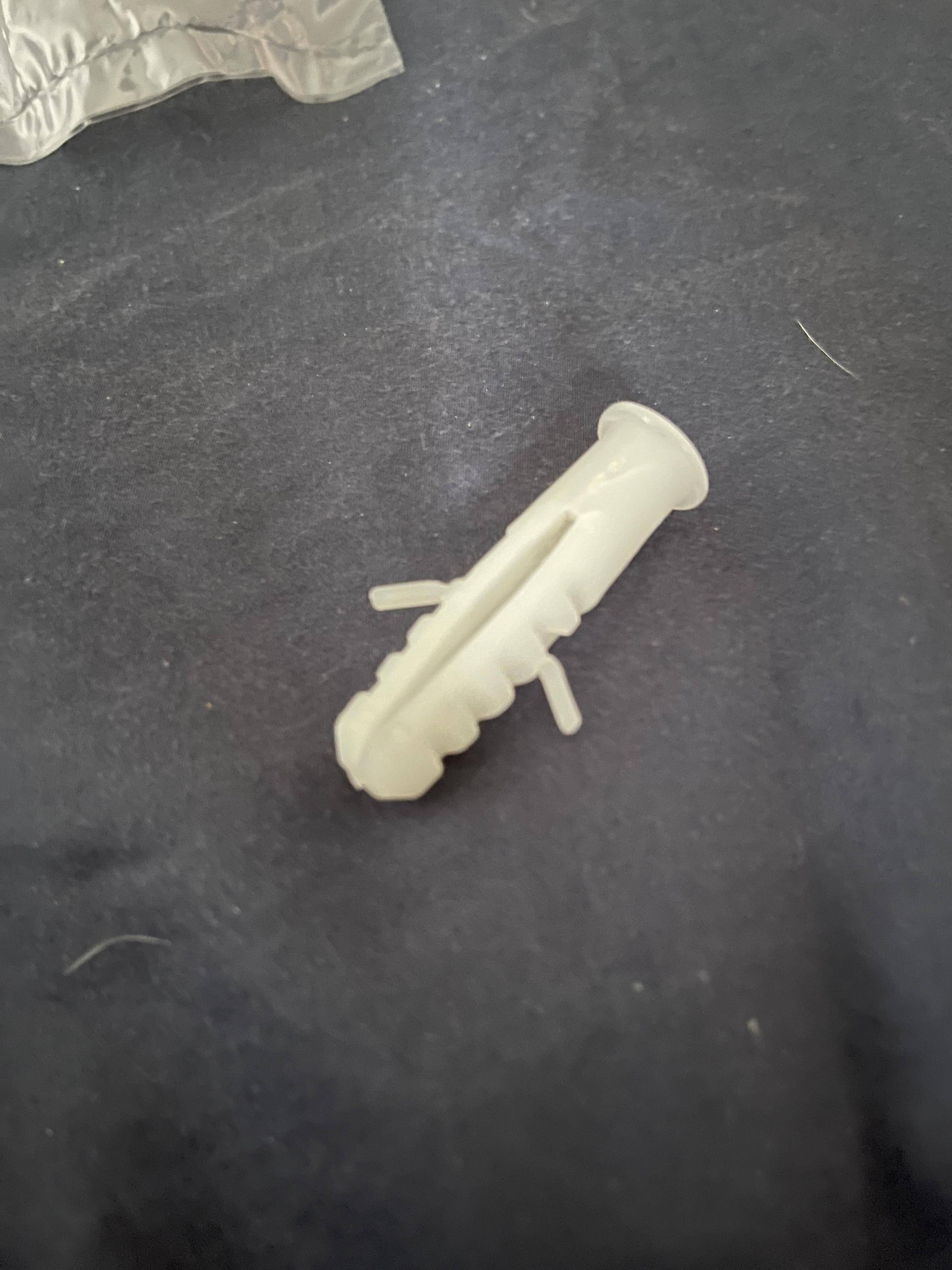 Looking into the holes that were drilled it looks like there is some sort of grey brick almost immediately behind the plasterboard that the fixings were drilled/hammered into. 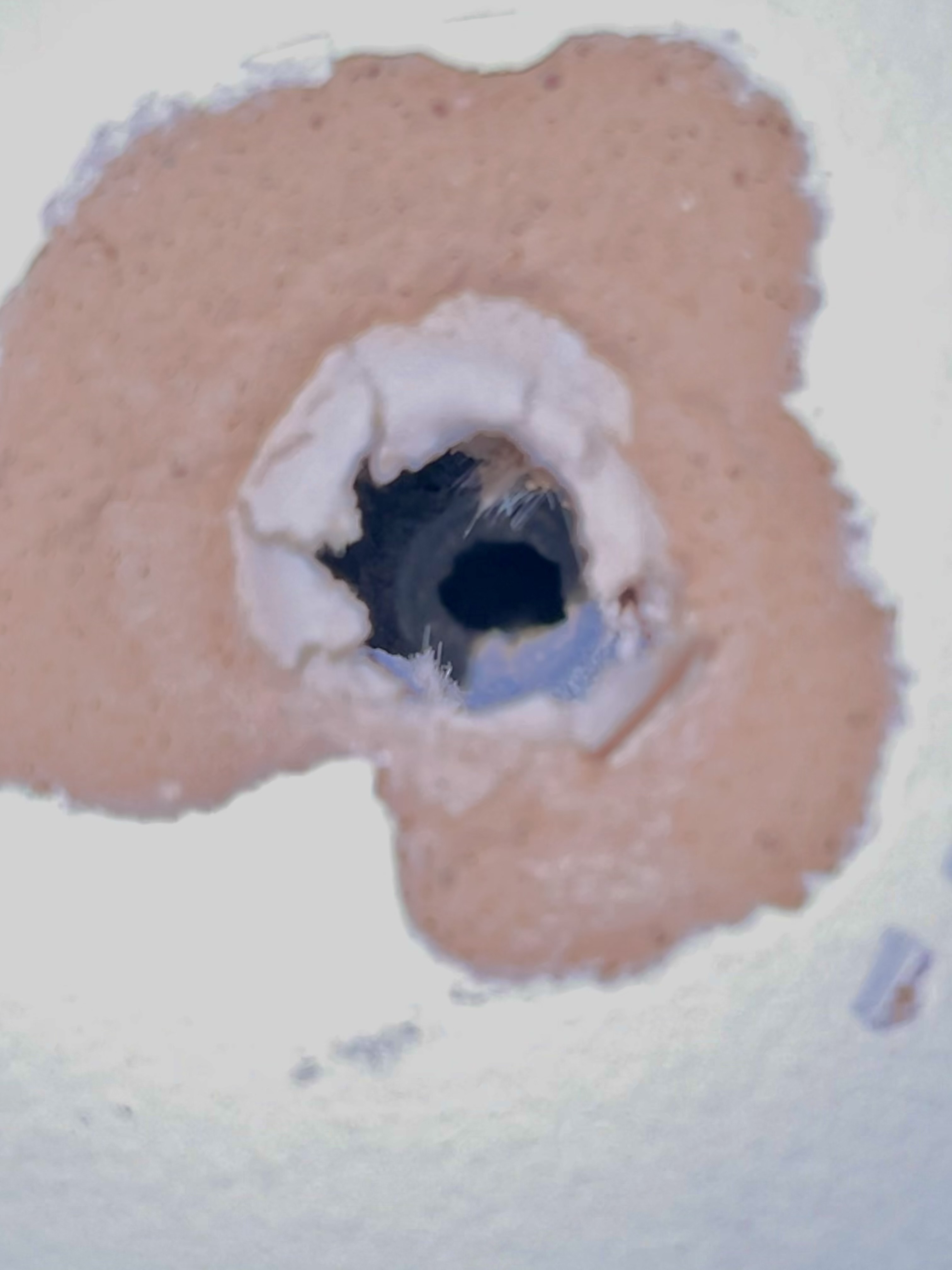 The reason for your standard 16" OC stud measurements being suddenly interrupted with an 8" measurement is that beam in the ceiling is being supported by a post, and 8" just happens to be where it was located. It's likely, though not guaranteed, that if you continue to measure 16" from the last "standard" spaced stud, you'll end up hitting studs again as you move to the left across the wall. Studs are usually laid out 16" and pick up again after interruptions for things like windows, doors and beam-support posts. It's also possible that they reset their measurement point at the post and the next stud is 16" to the left of the post. They may have also started at the left corner and laid out 16" centers moving to the right, ending regular spacing at the post.

Now that you know 3 likely locations for the next stud, if your stud finder doesn't find anything there, you can use a slim drill bit (3/16" or less) to drill holes in likely locations looking for the resistance of a stud or lack thereof when missing it. A hole that small is easy to patch when you're fixing up the holes from the old mount and will be nearly invisible after doing so.

That plastic bit in the 2nd picture is one of a variety of standard drywall anchors. It's no one I would personally rely on to hold up a TV and TV mount, though if it's a non-moveable mount, 4 of those might have sufficient holding power.

The general advice is to mount a piece of 1/2 - 3/4" thick plywood to at least 2 studs using lag bolts, then you can attach the mount to the plywood with the screws supplied with the mount, and you can do that anywhere you'd like since the plywood will provide proper grip for the screws.

It is possible to hang your mount/TV directly from drywall - there are drywall anchors that are rated for as much as 100lb each, and 4 of them would be more than sufficient. These are not the plastic type anchors that you showed, they're toggles that will require a larger hole and bolt through the anchor & the mount. However, it's your TV, so you can make the call on whether you want to trust your TV to those, or if you want to make the extra effort to find the studs.

It appears that the "grey brick" behind your drywall might be steel studs, though the rough shape of the hole back there is a bit odd. Do you have any idea what's on the other side of this wall? If those are steel studs, you'll want to use anchors designed for steel studs, not lag bolts that would be sufficient for wood studs, nor "drywall" anchors.

@ FreeMan is right with his explanation so I won't add to it except to say that the gray brick could be just that or it could be concrete or concrete block or even cinder block. The studs are there, you just need to find them.

One technique that is commonly used (at least in the UK) for attaching drywall to block built walls is "Dot and Dab" or drylining which uses an adhesive to glue the drywall to the blockwork. The standard technique uses a solid line of adhesive at the board edges and then a few blobs of adhesive in the centre area of each board. This gives a detectable pattern which you can find by knocking and listening to whether it is hollow. There are no screws used which would explain why your magnet doesn't find anything and there is a small gap left between the drywall and the blockwork. 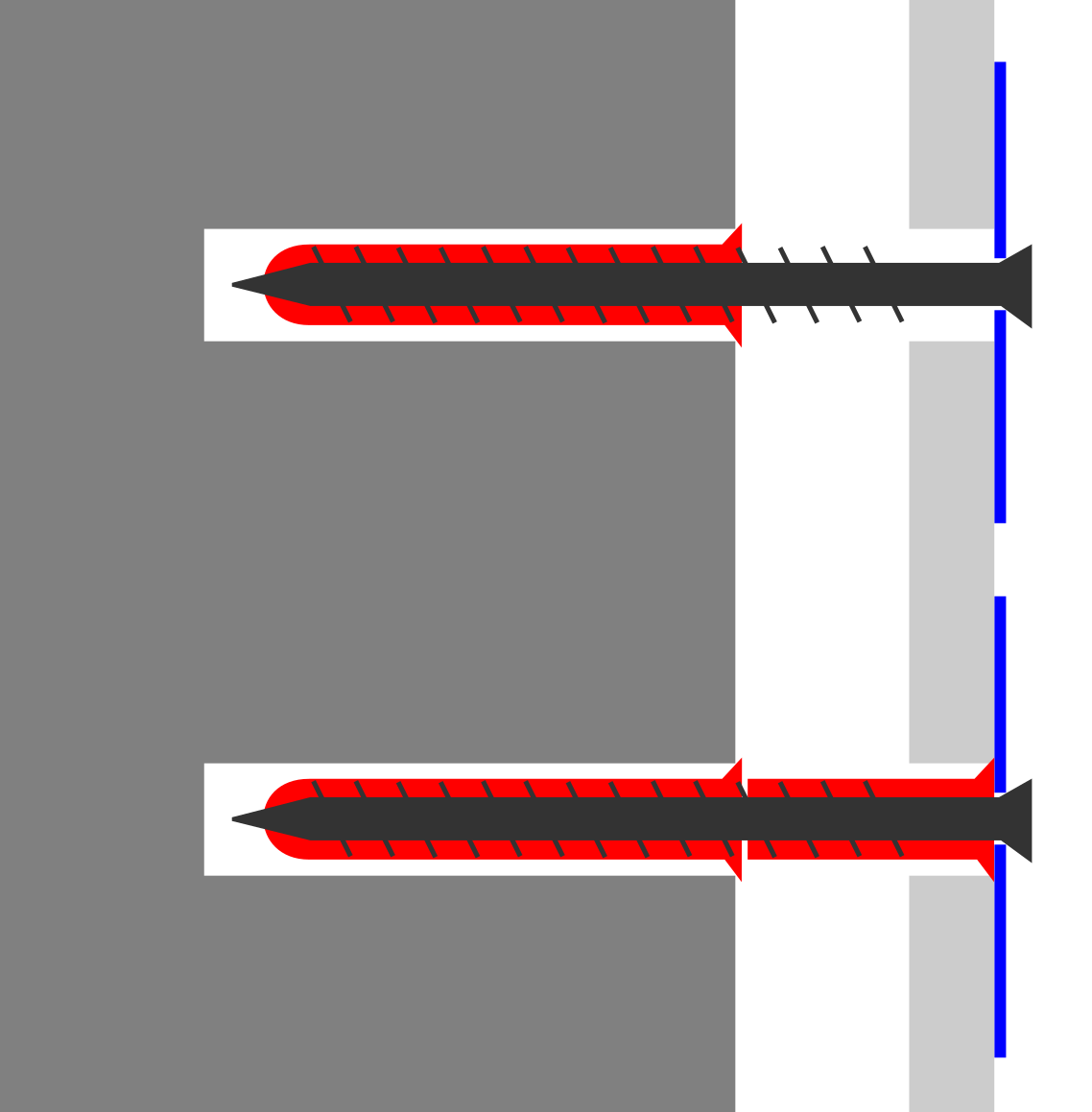 If it is dot and dot you may happen to hit a spot of adhesive instead of the cavity when drilling for your fixing. I this case you can just use the wall plug in a standard way since there is no cavity, the adhesive should be strong enough to take the fixing.

Alternatively for a stronger fixing you can use a specialist dot and dab fixing which are designed with a special reinforced section to bridge the cavity (corefix is a well known brand). Or an expansion anchor bolt, again anchoring into the blockwork.

1
Why does a wall in my finished basement only have a steel plate and no studs?
3
What's behind my drywall?
10
Can I hang a TV with one stud and drywall anchors?
1
Trouble finding studs in garage
8
What is the concept behind drywall studs?
3
Drilled into white/cream colored plastic behind drywall, what is it?
2
Finding studs behind 1" wood paneling?
0
Mount Heavy TV onto re-patched drywall