My basement has overhead LED can lights that were installed by an electrician 7-8 years ago, sometime after the house was built. It looks like they powered them by running conduit to tap into an existing light switch at the base of the stairs. Complicating matters, that light switch they tapped is a 3-way: there is a switch and a light in the basement, and a switch and another light on the stairs.

I was thinking I'd like to put in a smart switch for the overhead lights (a dimmer, to replace the current "dumb" dimmer). I have done several others throughout the house, but only one 3-way and none were "aftermarket" connections like these lights. When I opened the switch plate to see what the setup was and take some pictures, I immediately ran into some problems.

I see three romex cables entering the box- one is from the LED lights, one I identified as the 3-way with the traveler red wire, and one I assume is source power (but cannot be sure of the internal layout of the 3-way).

First, I found the white wire coming from the LED lights pigtailed and electrical taped to a ground copper wire. After having a few words exclaiming how long I've lived here and never seen that, I disconnected it. I have refused to reconnect it, but possibly as a consequence, the overhead lights have not worked right in a rewiring attempt. I'm hoping that I'm missing something obvious, but in my attempts in using what I thought were the correct hot, ground, and neutral wires, the LED lights become tied to the 3 way switch.

Possibly related to this confusion is the romex cables I thought were the source power. If I unplug every wire in the box, only one tests hot: the WHITE (no black tape) wire coming in through that 3rd cable (not the one to the LEDs, not the one with the 3-way runner).

Please see my attempt at a sketch below that represents what is currently in my wall.

...but given the three-way and the possibly reversed colors I'm at a loss for the moment. 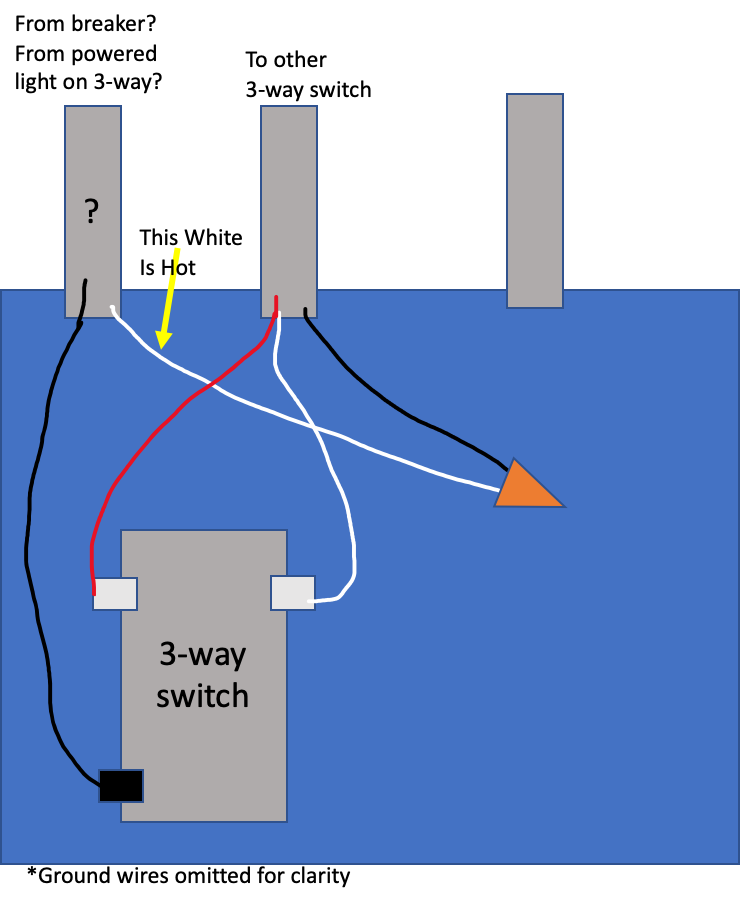 Any help is greatly appreciated!

Edits: Here are pictures/diagram of original wiring as close as I could get them. I admit I immediately disconnected the white/ground pigtail before taking any pictures, so I cannot be 100% which white wire and ground wire it was. I suspect the white coming off the LED lights because otherwise it wouldn't be connected to anything, and the ground coming from the unknown romex (A in the sketch), because otherwise it also would not be attached to anything.

Also worth pointing out, the other end of the 3 way is a single gang box with just the other end of the wires from the box of interest. There are no other cables going into the other 3-way box. I’m no electrician but at I assume this tells me that the power source is likely to be connected to one of the lights, given that the box I’ve been exploring appears to be a switch loop per feedback so far.

Pics couldn't get a great angle thanks to shorter wires on the left 3-way switch. The original Lutron dimmer is on the right, and has 3 built-in wires: red, black, and a taped off unused red/white since it's not part of the 3-way. The electrician connected a green jumper from the dimmer switch to ground instead of just using the copper ground. I have more pictures but it starts to get cluttered. 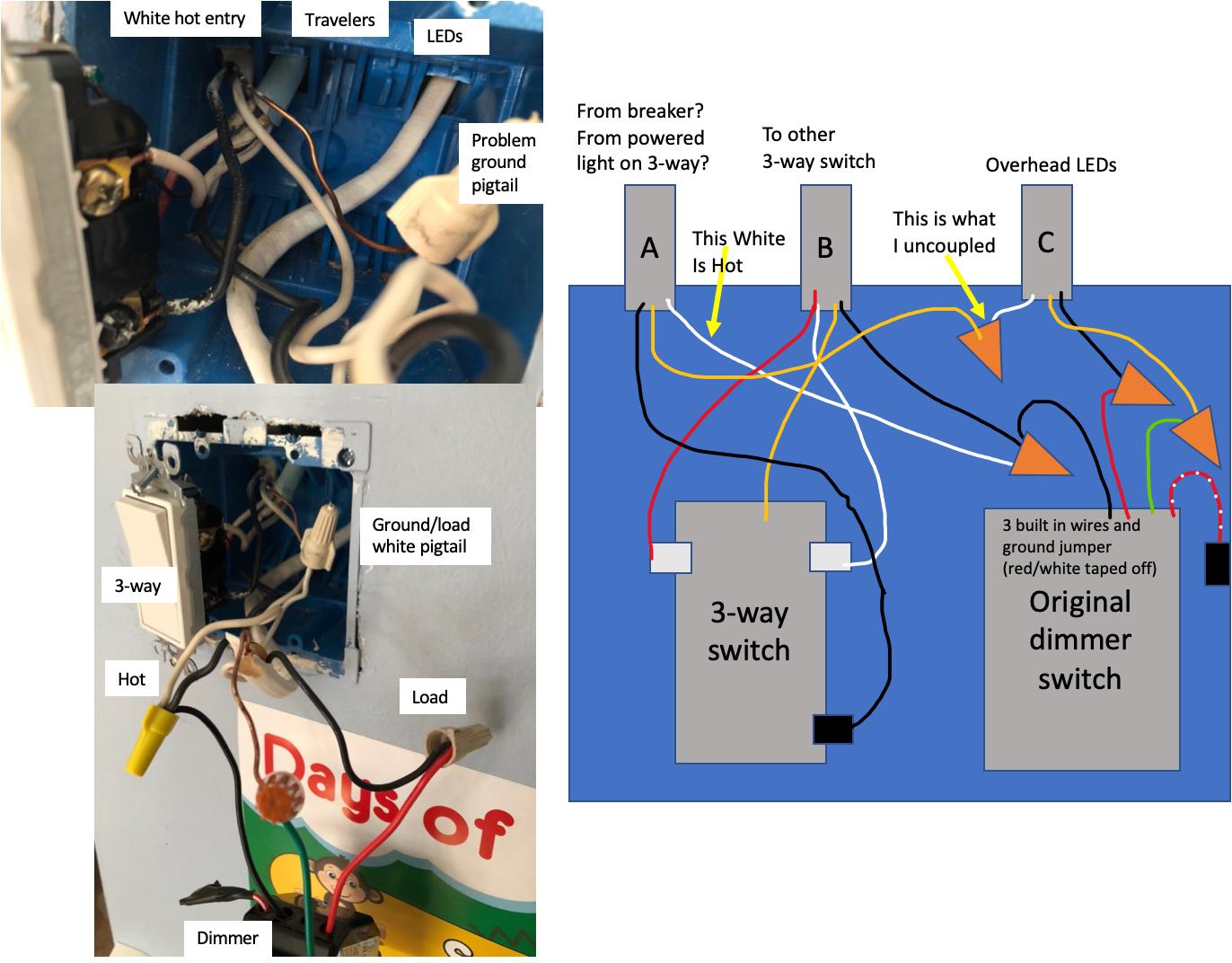 I guess the consensus is that this is a switch loop and the electrician cut corners. How should I have this fixed? Can the original 3-way be left as is, and I just need to run a line tapped to actual power from whichever of the lights has the source power (there's no outlet on this wall, it's about 4 feet long and just walls off between the stairs as they rise and double back from a landing, the other side is a closet). Would there be a way to identify source power to tap if I remove the light fixtures? Definitely will hire a professional for that part, just want to do my homework first. Thanks again everyone.

I believe what you are looking at in this box is a 3-way switch wired up like a switch loop. Here we go:

The problem is that with a switch loop using /2 cable, there is no neutral in the box. So the electrician cheated and used ground. Which is totally against code. It functions because the ground wire is capable of carrying current. But it ain't right.

New code requires neutral in most switch boxes to avoid exactly this problem. Without neutral you can't (easily) replace a dumb switch with a smart switch and you can't feed power off to other locations.

What the electrician should have done when he found out there was no neutral available is to find a different location to source the power (hot and neutral). And I think that's what you need to do here. If there is a receptacle nearby, you can pull power from there, or it might be easier to run a new cable to the fixture connected to the 3-way switches. Replacing the /2 with a /3 is an option if that's easier than adding a separate cable - but then you need to swap colors - use black for hot, white for neutral, red for switched hot.

To answer the later parts of the question:

Can the original 3-way be left as is, and I just need to run a line tapped to actual power from whichever of the lights has the source power (there's no outlet on this wall, it's about 4 feet long and just walls off between the stairs as they rise and double back from a landing, the other side is a closet). Would there be a way to identify source power to tap if I remove the light fixtures?

Yes, the original 3-way can be left as is. It is perfectly fine and grandfathered in. Existing switch loops do not need to be replaced or have neutrals added (unless you need to add a neutral for functional reasons).

If you open up the light fixture (the one controlled by the 3-way switches, you should find wires as I described, and yes, you can link up another hot black/white neutral to them to bring down to the box for the LEDs. Keep in mind that if you do that, you must put the hot & neutral both on the same cable in the box - you can't cap the new hot and just use the neutral together with the old hot. Even though they are all on the same breaker, the wires in each cable must always be carrying the same current (hot + switched hot or hot + neutral or hot + travelers).

Closets are sometimes helpful as you can run a cable (properly secured) without worrying about aesthetics, at least not to the same degree as on a visible wall of a room.

1
Dimmer wiring for 3 wire single pole
0
Installing an exhaust fan in place of a light fixture
2
Replacing 3-way Dimmer with Smart Dimmer
2
How can I use a switch for outlets to control a new overhead light?
1
Is my neutral wire tied to my ground?
2
4 wire switch with 3 wires in wall
1
Connect Single 3-way Light in 3-gang Box (Lutron Caseta)
0
Hot Neutral Wires after breaker off
1
Why are white/neutral wires connected together with the ground wire?