The distance between the street gutter and the top of the sidewalk in the curb-cut for my driveway is short making the angle at the crest such that a car bottoms-out when entering or leaving the driveway (see photo). I ground down the crest a bit (that was a lot of work) and it helps some, but not enough, so I need to do something else.

One thing many driveways near me have is about a 2" lip on the gutter side that "pre-lifts" the car up before getting to the crest. But I believe that would require jack-hammering out the about 30 sq. feet of concrete and pouring new concrete and that's not that cheap to do.

I've seen other driveways where it looks like (somehow) they've added additional asphalt on the gutter side to have the same effect of pre-lifting the car up. I've seen "asphalt patch" bags or tubs for sale to patch asphalt driveways, but would that work for a larger 10 sq. foot area?

The last thing I've seen are driveway curb ramps that are essentially big pieces of rubber you affix to the street, but that requires a specialized drill to drill into the concrete.

Per a comment, I'll define "best" as longest-lasting that, while it doesn't need to be cheapest, ideally shouldn't be crazy expensive. One concrete contractor quoted $2500. 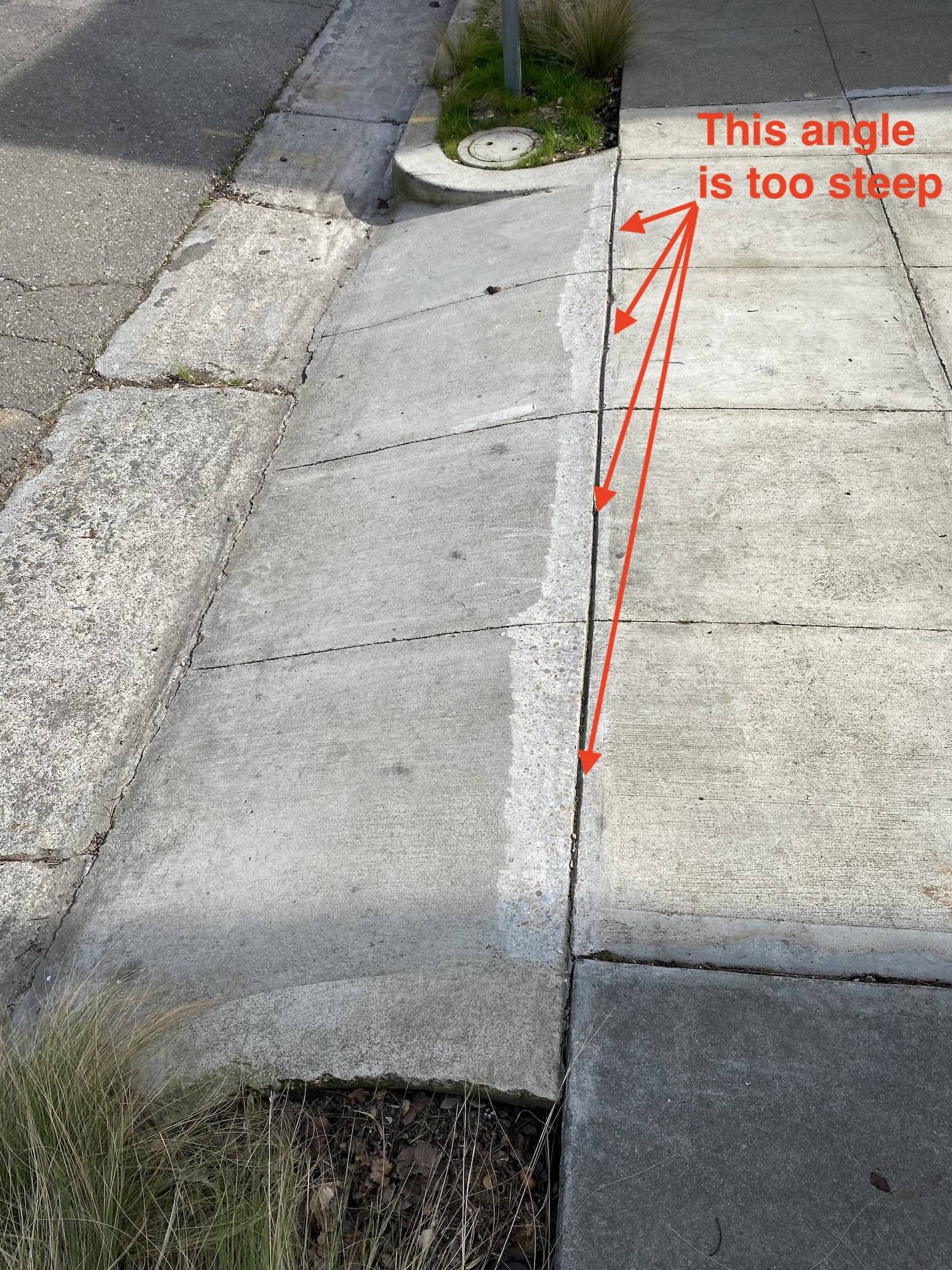 Everyone will probably look at the curb itself, and come up with useful suggestions, so I'll let other answers deal with that. I shall address the less obvious but nevertheless likely source of the problem: the damping elements in the car's suspension. If your car has less than 75k miles on it and is not considered a budget car, then probably dampers aren't your problem and you can skip this answer. But if you have a car with more miles than ~75k, or it's a 50k+ mile car that is an economy model, the below should at least be considered.

I have a curb with apparently similar dimensions, and I can drive up on it at any speed above 8mph with no worries about contact between the car and the ground, but I most definitely couldn't do that before I serviced the suspension on the car (I did it myself, in order to trade off my time for better quality performance parts than what the dealer would put in by default).

The faster you go up this curb, the less tendency for bottoming out the car should have as long as its shock absorbers and/or struts are not out of order. The tendency to bottom out will come to light as the damping ratio or damping coefficient of the suspension degrades and gets lower, i.e. as the dampers wear out.

In fact, out of various "DIY" means of testing dampers for wear, going up a curb exactly as shown in the picture is about the only way to get a qualitative answer good enough to act on. The only other way I know of doing it to get a clear "good enough/replace now" answer is using fairly expensive lab test equipment.

The various "push down on the car and release" voodoo incantations you can read about on the internet are not very useful except for catching dampers that have completely failed. Most dampers fail progressively and perform very poorly way before failing catastrophically, and that will not be caught by the tests you perform only by humans pushing on the car: the humans are not a fast nor strong enough actuator to yield a usable result, whereas going over a curb uses the car's own powerplant and inertia to generate significant loads at the rates necessary to evaluate damper performance.

In other words: if you try going up that curb at twice and thrice the speed you normally do and the car seems to be bottoming out worse the faster you go, then you need to change your shocks/struts on all four wheels, and the problem will vanish - I'm quite sure of that. You may need to tell us what the car is you experience this problem in, the mileage, and when were the shocks and struts last replaced (if ever). Many cars will have significant trouble with the curbs as pictured once their shocks/struts have accumulated about 100k miles, although this also highly depends on the quality of the parts installed (whether at the factory or the last time they were replaced), and the use history of the car - i.e. if have to drive on dirt roads daily, your shocks may need replacement at shorter intervals in order to maintain a reasonable fraction of their original performance.

Now the flipside: it's possible that due to the angle the photo was taken at, and due to what's outside of the photographed area, the basic geometry of things may be conspiring against you even if you have a brand new car with awesomest sports suspension. That's a possibility, but worn out shocks are slightly more likely than curbs that grow too unwieldy to drive over. I mean, if the curb is seemingly growing over time, that's an entirely different sort of a problem (roots, freeze-thaw action, settling of the soil, etc).

A fix sometimes seen in my region is steel plates: something on the order of 1/2" thick and long enough to bridge roughly from the edge of the asphalt to halfway up the approach. Sometimes I see it as a single piece of plate the full width of the approach; other times multiple narrower plates are placed side by side to cover the full width. I suppose narrower plates are chosen for handling purposes; half-inch plate weighs 20 pounds per square foot.

These plates are not not a favorite in snow plow country, but if Oakland CA has snow plows any place except maybe at the airport I'll be surprised.

Get a professional to put in a steel or concrete ramp.

Put down a pipe so water can still go through, and put concrete around it to elevate the gutter's depth. Cost will be 1x pvc pipe, a bag of concrete, and an afternoon.

Never drive straight on the curb. For whatever physics reasons, if you're turning hard as you go over the curb, the car doesn't scrape the ground as much as driving head on. This is what I ended up doing.

Not the answer you're looking for? Browse other questions tagged concrete driveway asphalt or ask your own question.

6
How do I reduce height of the curb on my driveway?
6
Driveway Gutter / Rain Guide?
2
Can I fill sagging spots in my driveway with asphalt and hot tar?
1
Maximum height of hand-shaped concrete curb?
1
Removing basketball hoop from asphalt driveway
4
Can I use sealer over recycled asphalt to retain it?
1
What are my options to level a concrete driveway?
0
Substance to help cold patch adhere better?
1
How can I transition from brick pavers to a concrete slab for wheelchair access?
1
How to deal with wheel channels in old driveway