How to reinforce a joist with plumbing running through it?

After removing the sub floor in my bathroom in order to extend the sewer pipe for the toilet (it's too close to the tank-side wall), I found that the floor joists have extremely large holes cut in them to make way for the plumbing.

Should I brace it with steel bridging? I'm concerned about the potential vertical load.

What options do I have?

The room is approx 74" by 105" (the 105" runs in the same direction as the joists, it appears that the joists are at least that long, but may extend beneath other rooms) Joists are 15/8 inches wide, 71/2 inches tall. There is a 1st floor bathroom below. There is a tub in the 1st floor bathroom bordered by 3 walls - one of these walls runs perpendicular to the joists 4 feet away from the wall shown on the right in the first picture below. 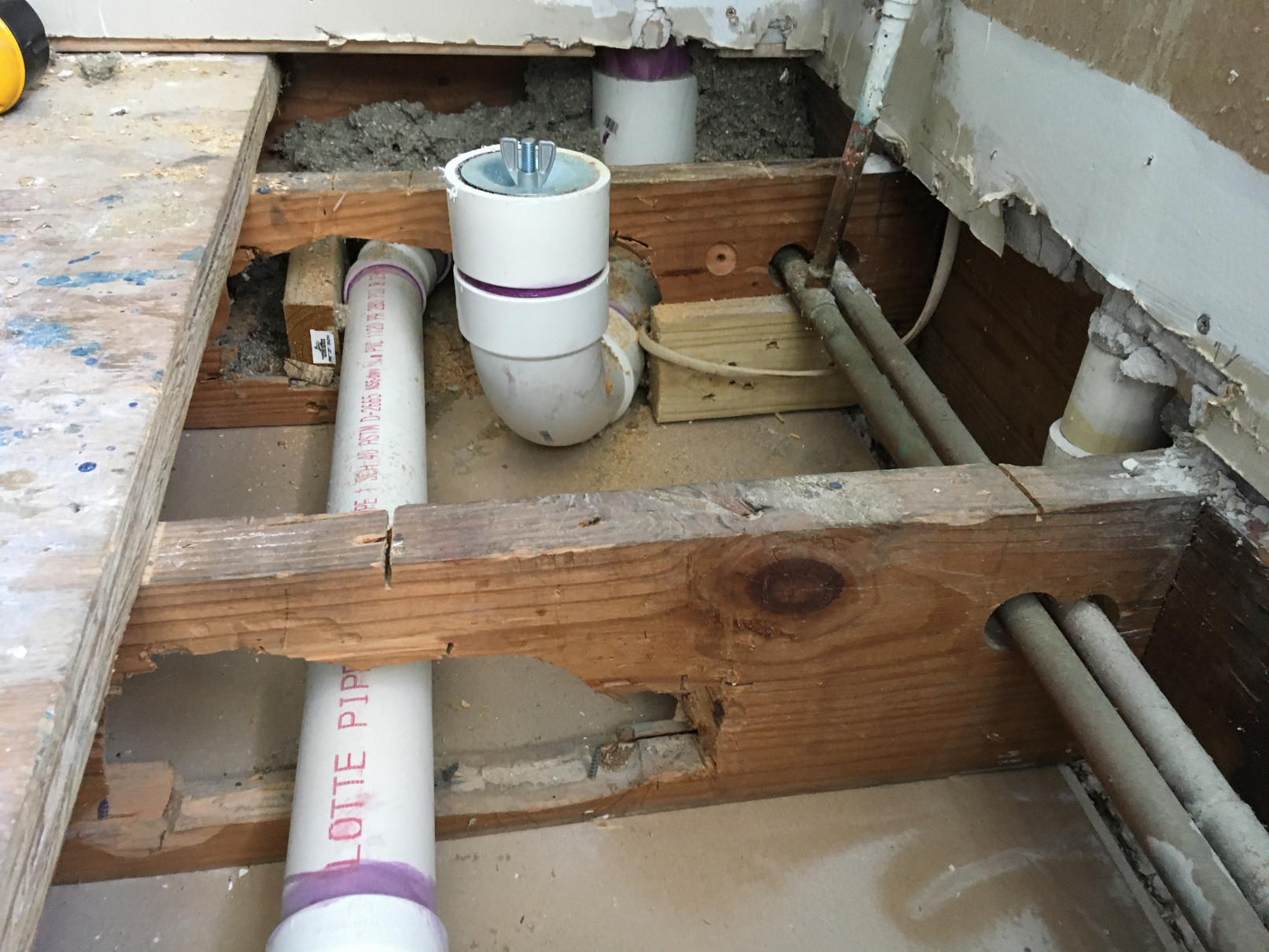 You can see in this close-up that the furthest joist is completely missing it's bottom: 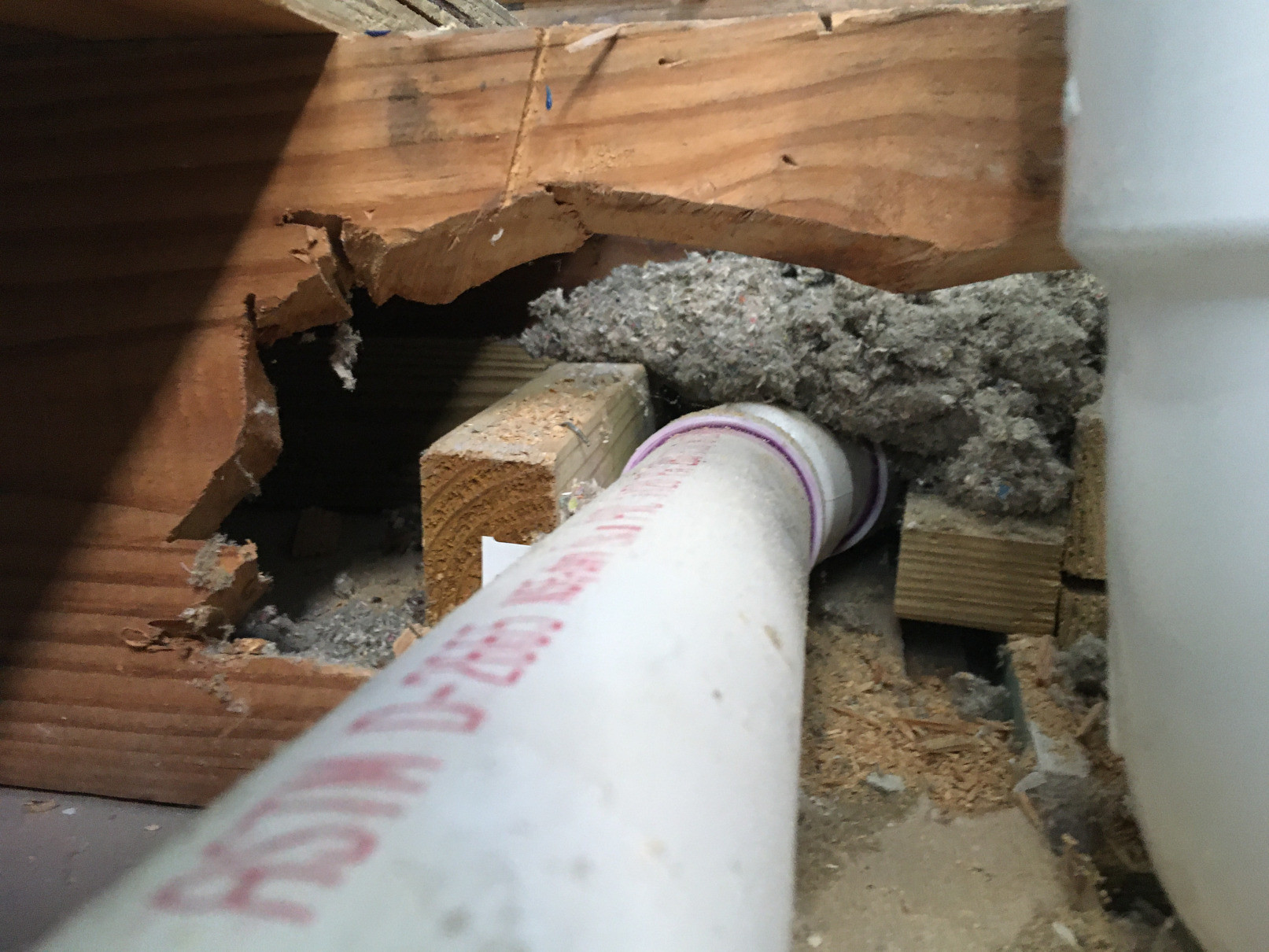 I brought in a structural engineer and he said the 18' 2x10 was already over current span code limits without the 5" notch. He specified 3/4" continuous ply gussets nailed to each side of the joist extending 18" past each side of the notch. He allowed the gussets to only be the 4" height and fit under the notch.

In your case, you are not in the middle span, I assume this is the start of the joist?

The toilet rough in appears to have completely cut through the joist so there is no connection and it has been blocked to the side joist with a single 2x4 and a single nail.

You likely want to get a structural engineer to specify a prescriptive fix for this. A site visit and prescription is likely to cost less than $1,000 and be well worth it.

You might be able to sister with steel that is shallow and could sit above and below the plumbing penetrations and not need to be sistered the full length of the joist.

I would sister 2 pieces 3/4" marine grade Plywood Braces (since it's under a toilet) on one side of the damaged joist as shown below. Use Epoxy or Urthane glue and SS deck screws to tie them to the Damaged Joist. After both Sister Braces are set and in place, add a plug (not shown) in the gap of the Brace A's (purple) opening since it'll be under compression. 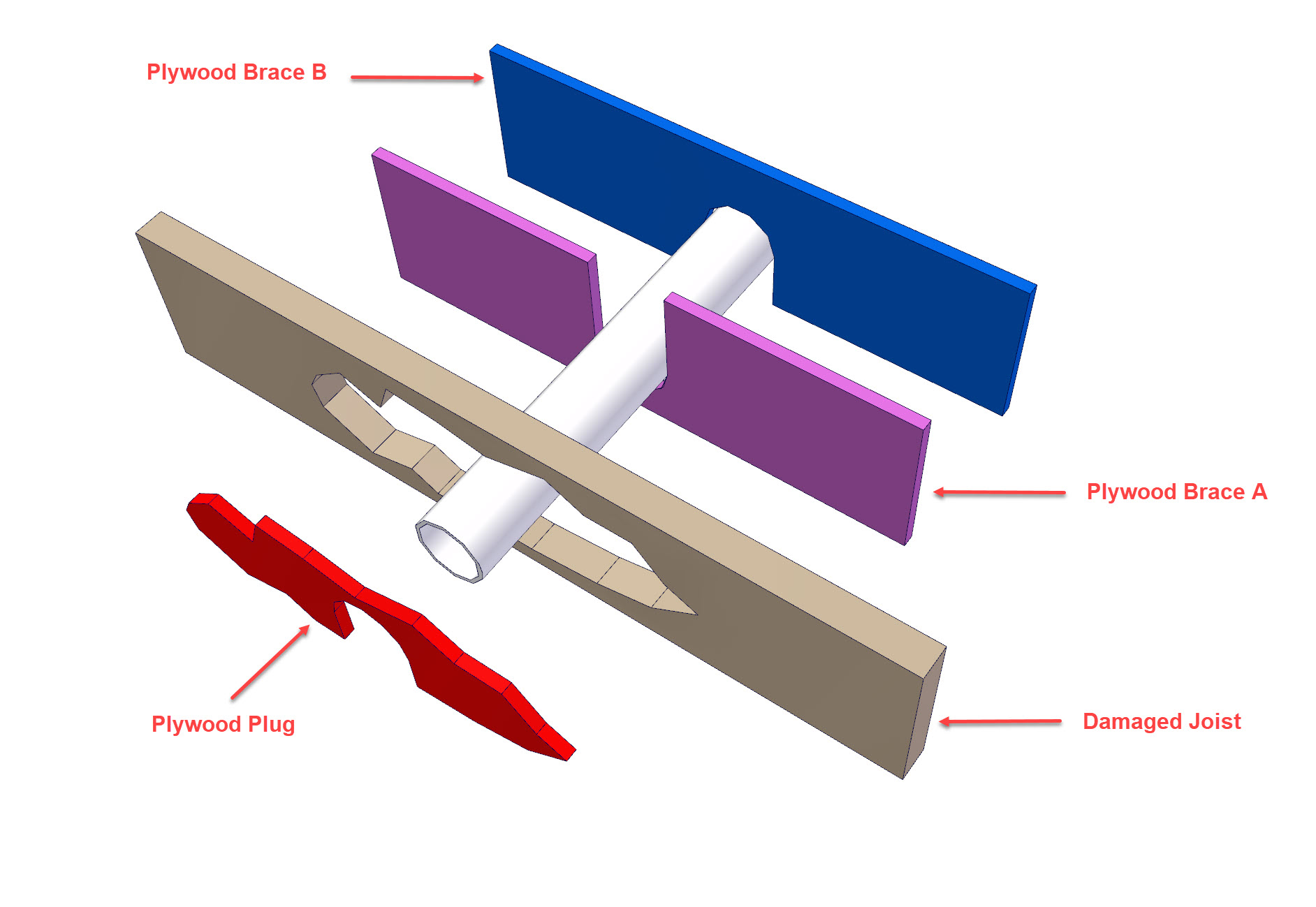 Then trace the joist's opening and make a rough cut plug. Glue this in and fill in the gaps between the plug and the joist with a "filler type" resin.

Finally add 2 more Sister Braces (not shown) like on the first side.

I have dealt with this in older houses that have had water damage in a location in a bathroom.

Basically you will need two things with maybe a third: 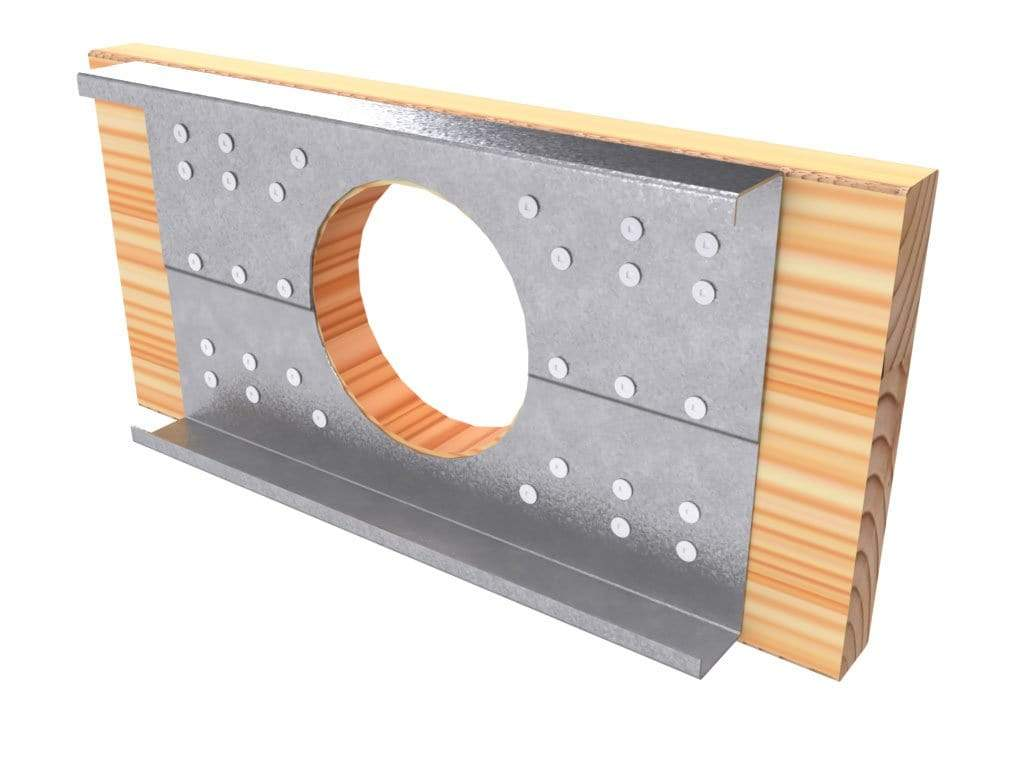 I would get an engineer to sign off on it and I would sue the plumber or withhold payments. This is really insane.

I have no idea what the other answer are getting at but this is really your only option unless they make you get rid of the joists (or make joists useless by installing others. Depending on the span it might be cheaper to throw a small I beam across there - depends what is in the way and all that good stuff. Answer I gave you is how you have to repair this, it doesn't qualify as saying that repairing this is good enough.

To clarify #2 - sistering might include that section, up until load point (going to nearest wall and making that a load point) or the entire joist (then you might as well install a small i-beam). I have had engineers tell me to sister to a load point to meet building code and then the city tell me that all joists must be run to "main" load point - guess they are future proofing in case of renovations. But as mentioned in comments if you just sister this section, there are sleeves (some cup the bottom) that hold up large building structures so holding up a residential joist is not a big deal. Now is it cost effective if each sleeve costs $300? I don't know.

Also not an engineer but building my own home.

I would suggest one of four solutions, in no special order, but please check with a structural engineer if you have any doubts.

I would draw attention to the issue that the entire joist system is at risk. Just like parallel joists can reinforce each other, if all are weak, that shared strength may not be dependable. So I'd take it seriously as you are doing.

Sistering the joist with some C shaped steel channel with an appropriate round (not rectangular! see below) hole cut through it. You'll have to break and re-make the plastic pipe to do this, but that's relativrly easy - PVC cement.

The idea is that C channel will lie with its back (the web) flat to the joist, so it can be very well secured to it, and torque (twisting) won't be a point of weakness.

The C channel wouldn't have to be very thick. It needs a stiffness more than or equal to the joist's original strength for safety and wood is very limited stiffness compared even to thin structural steel.

In steel constriction, be it "I" beams (RSJ), C shaped channel, or rectangular tube (RHS), the strength is provided by the flanges (the top and bottom parralel surfaces) not so much by the web (the connecting part between them).

The idea is that as the beam takes on its load, it flexes, and the flexing means that the 2 parallel surfaces have to stretch at different rates. The thicker the top and bottom flanges, and further apart they are, the stiffer the beam.

Steel takes a lot of force to stretch, so it resists the load well. But this also means that provided the hole is of a size that the channel keeps its shape (which this looks like it will do) the web is very much secondary - which is why I suspect a hole even of this size won't matter to it,provided the steel is firmly fixed to the joist along its length and top and bottom.

In fact, the web's main job isn't to resist load. It's to keep the 2 parallel surfaces aligned and separated in their original position so they would have to stretch under load (thus resist it), and can't just move closer or twist instead.

Note as Jasen says in comments that its important to cut rounded not crude/rectangular holes, to minimise stress and weakness in the steel, which naturally arise much more at cut and sharp corners.

You could also place steel angle along the length of the joist above and below the pipe. If that's attached really firmly to the joist so it can't pull through the wood, in theory that would work.

I honestly would have real reservations about this, because whatever you use to secure the angle to the joist, wouldn't have to pull much through the wood at all, over time, to allow the joist to sag. It doesn't have the needed overall stiffness, because the top and bottom aren't held in a fixed position against each other, unlike C channel that innately resists flexing even with a hole in the web.

This would be the simplest, but also my absolute least favourite of the 4 because of that concern.

3) Remaking the joist system to avoid the issue:

You've exposed the joists and clearly are somewhat comfortable with heavy DIY. Alljoists will need fixing anyway. So this might be one other solution, depending on the masonry and other structure of the property.

The joists in that room run "left to right" in the picture. If the property allows and has suitable load bearing walls, one could prop them all either side of the pipe/s (use timber under them so they stay aligned), cut them either side of the pipe, and put doubled or very heavy duty joists running "front to back" parallel to the pipe. Then attach the cut ends of the old joists to your new ones using ordinary joist hangers. Essentially youd be stopping all of the the joists at one side of the pipe and starting them again 200 mm/8 inches further,on the other side of the pipe.

This would work very well, provided there is structurally sufficient bearing for the extra joists at the front and back. While that would not be in the design of the property, the load would spread down through those walls at 45 or 60 degrees, along the ground, so support may not be a huge issue. You might need to ensure good bearing at the top.course of brickwork (engineering bricks below the new joists?) and you'd definitely need to check with an engineer for this. But if they agree, its definitely cheaper to do than steel and any builder could.do it.

Vertically in a box conduit in a corner, outside, wherever. Just reroute the pipes and then replace or sister the damaged joists.

Cheapest and probably simplest of all the 3 I'm sure would work.

It looks like you'll have to replace that toilet pipe into a higher location, (using a street elbow at the inlet end should give you about two inches more height, using 3" pipe will give even more)

For fixing the joists it will be tricky, a beam notched half way through has only one quarter of its original strength. you basically have four options,

Replace the joists and do over.

Install posts or a structural wall below.

I'm not an engineer, so take it with a pinxch of salt, but what I would suggest is, build vertical supports along each side of the pipes. And by 'build' I mean bricks and cement, reaching all the way to the same level as the top of the joists.

Since the joists are in fact standing on the concrete underfloor, I think that should be enough to make it safe. Mind, I don't know anything about US building codes.

In light of FreeMan's comment, this won't work, since I was mistaken about the 'underfloor' - it isn't concrete, but plasterboard ('dry-wall'), which makes those holes particularly eye-watering.

I think the idea may useful still: add some strong timber parallel to the pipe on both sides, using joist hangers (randomly found with google), with maybe 20 - 30 mm clearance from the top of the joists, and add good plywood board on top of the new timbers, up to the same level as the top of the joists.

Actually, I'm talking nonsense - don't do this. The problem here is that the joists have been weakened and are unsafe, even if there wasn't a toilet on top. Really, the pipes should be removed/relocated and the joists strengthened appropriately. Sorry about this - my brain isn't working today.

Not the answer you're looking for? Browse other questions tagged plumbing joists or ask your own question.

1
What can I do about joist framing in brick pockets that is uneven and loose?
1
How can I level the joists and ceiling?
0
Help with plumbing a drain for a new shower? (with example picture)
2
Repair or Replace Cut Floor Joist
3
Unsupported Subfloor Hanging Over Joist
1
floor joists splitting at non-beam end
1
How to sister joists to level a floor when they've already been sistered to level the ceiling below?
0
What is the max span that can be supported by 2x4 floor joists?