How to harden a sloped grass driveway so that damage does not occur that has some softer spots?

I am wondering how to harden a particular soft edge along a driveway so that I can drive on it without damaging the lawn.

Last year I installed a secondary approach by building up my lawn with the recommended soil sand mix and most of it setup great and I am able to drive on it even right after a rain or snow melt with a full size pickup and trailer. There is however about a 10ft section right off my driveway that is softer than really the rest of my lawn and especially the rest of the secondary approach (which is lawn).. by August it is hard as a rock with the dry weather.. but the first half of the year it is soft.

I know I could put down some crush gravel and just let it be gravel but I both want to keep it lawn as well as not 'move' the problem. I've used Geoblock in trail building but its expensive and not always practical and not sure how it does with driving on.
I also read that sanding probably wouldn't help and I already installed drainage ditches or slopes on both sides (there is a ditch between the hardened lawn and the trees and a general slope downward side of the hardened lawn in this picture).. what else can I do? 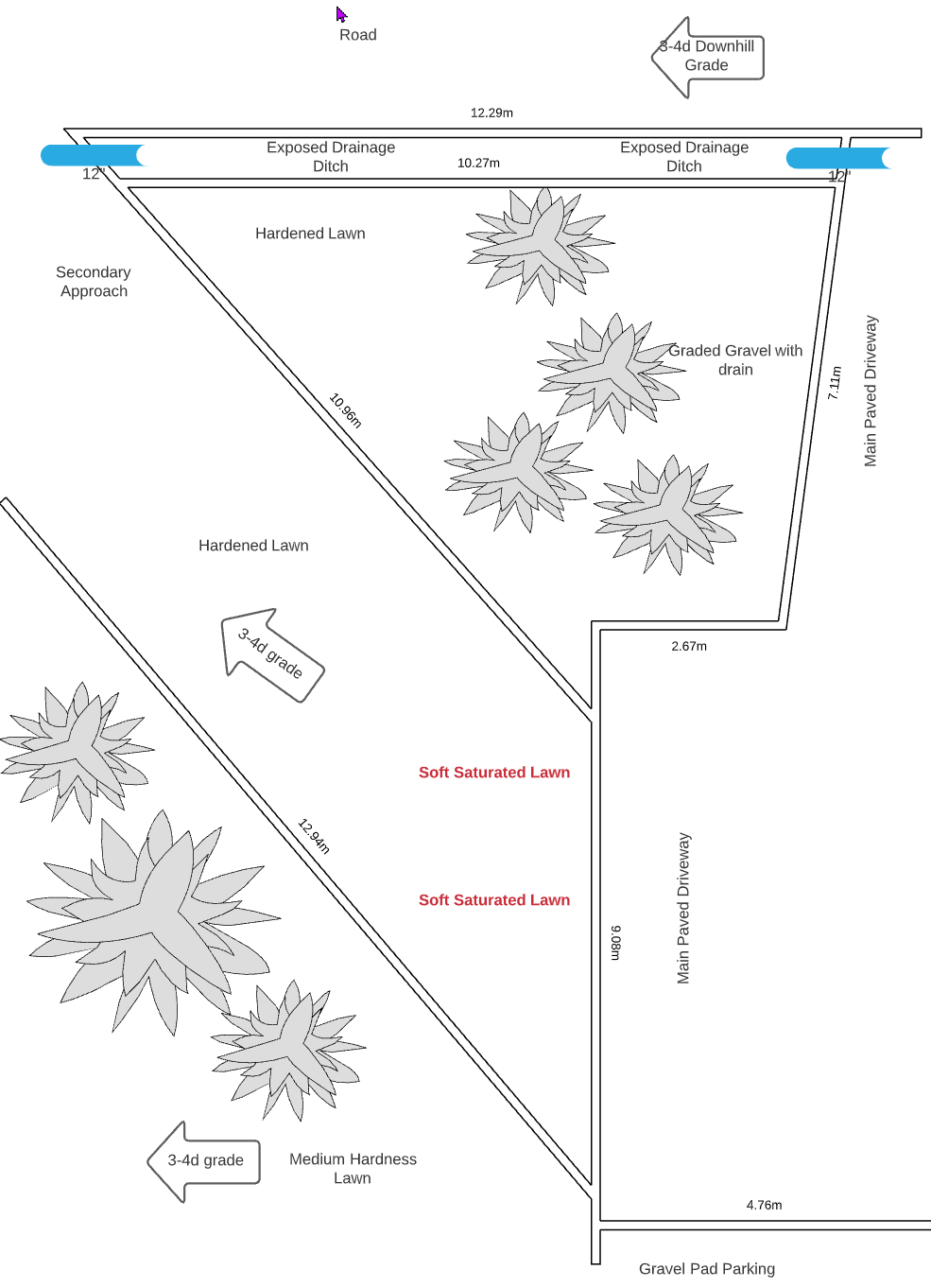 I read other posts that sanding it

It sounds like that soft area has deep water saturation which generally occurs in a low area during wet season. Because it's apparently not just a surface issue I don't think you're going to have a lot of success by adding sand or any other material to the grass surface. The best way to deal with it is to remove/redirect the water. One way to do this is to take up the sod and regrade that area - a lot of work.
However, I would first try installing a french drain in that area to channel the water away. The trick is to get it deep enough so that it's below the water saturation level and also making sure that you're not simply transferring the problem to another area. It's difficult to do without being on site but I would proceed as follows:

(1) Dig a small test hole in the wettest part of the lawn to see how deep the saturation extends down into the soil.

(2) Determine the source of the water. Assuming your arrows all point downhill it may be (and I suspect it is) runoff from the driveway.

(3) Decide where you want to channel the water. Obviously, it needs to go downhill. That will determine the length and direction of the drain. It may be possible to run the drain parallel to the driveway being careful not to compromise the driveway base.

(4) The drain should be be installed to the depth of the lowest water saturation point.

French drains are best at channeling water from above and less so from the side. That's the reason you want to make sure it's deep enough. It then redistributes the water through holes along it's length. Depending on the slope you're dealing with you can leave the drain open on the low end to facilitate drainage but it's not necessary.

Not the answer you're looking for? Browse other questions tagged driveway lawn or ask your own question.

4
How do I improve the drainage of this grass driveway?

4
How do I improve the drainage of this grass driveway?
4
How do I repair a concrete driveway that has been damaged by salt?
5
Is Schedule 80 PVC Conduit Suitable for Short Directional Boring?
3
DIY way to wash sand/clay out of driveway gravel?
0
Can I build a gravel driveway over sand?
7
How to repair street end of driveway that has loose asphalt?