I need to install two breakers into my panel. My buddy already ran the two wires into the panel, but has kind of left me hanging. I've attached a picture of my panel and was going to copy what the builder did (home is 2 years old). It looks like I can use the same bar for both neutral & ground? Why do some breakers have 2 whites and that's it? Did they use a white as the hot? Why do some breakers just have 1 black? I'll be installing two Eaton All In One. These have the white pigtail. I'm assuming I just tie the ground in with another ground on the bar, use a new space for the neutral, run the hot/neutral to the breaker followed by the pigtail to the bar in a new space as well. Suggestions? Sound right? 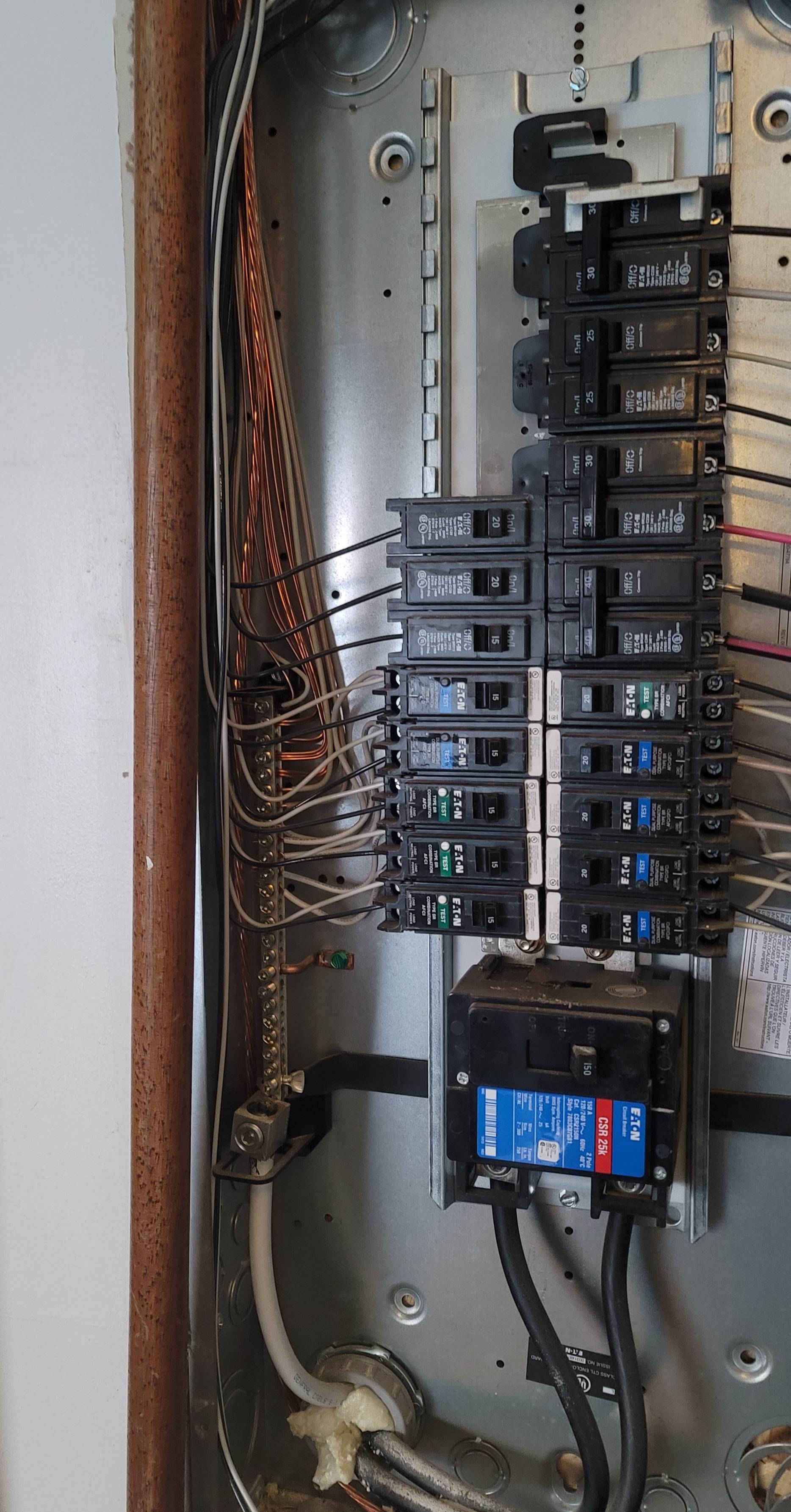 I couldn't identify any breaker with only two white wires, but the 10 breakers at the bottom each have two white wires plus one black. This is because they're arc fault (AFCI), ground fault (GFCI), or combination of the two functions. Those kinds of breakers have to monitor the current through both the neutral and the hot lines. The white jumper from the neutral bar to the breaker makes this possible.

The breakers that have only one black wire connected to them are conventional breakers. The neutral wires corresponding to these are attached directly to the neutral bus bar.

The connection of the new all-in-one breakers is just as you said. The white pigtail should connect to the neutral/ground bus bar, and the ground conductor from your new circuits goes there too. If the pigtails aren't long enough you can extend them with a piece of same-gauge white-colored wire joined with a twist-on connector (aka wire nut). Then the black and white wires from the new circuits go to the line and neutral terminals on the breakers. Position matters; the breaker will be marked in some way to indicate which terminal is which.

24
Where should I NOT use a GFCI or AFCI?

3
Why am I getting no power to the branch circuits with a new sub-panel?
1
adding a ground wire to a 2-wire breaker panel
0
GFCI with 2x 20 amp 1 pole breakers
1
Can I replace two Siemens QP type, handle tied, single pole 15 amp breakers with a tandem QT type in the same configuration?
0
Can I install Whole Home Surge Protector into two single pole breakers?
0
AFCI breakers in a Main Panel installed and tripping immediately with neutral pigtail connected
3
Two hots, one shared neutral, can it work with plug on neutral GFCI/AFCI breakers?
1
GFCI pigtail in service panel
0
Compatible GFCI/AFCI combo breakers