Where does the strength of a French cleat lie?

I'm making a French cleat wall for a home office. I'm wondering how to make the strongest French cleat. Is it the length/angle of the bevel that matters most, like in B vs A in the diagram? Or is it the overall width of the cleat that is attached to the wall, like in X vs Y? Or does overall thickness of material (as in across A-side/B-side) make the real difference? 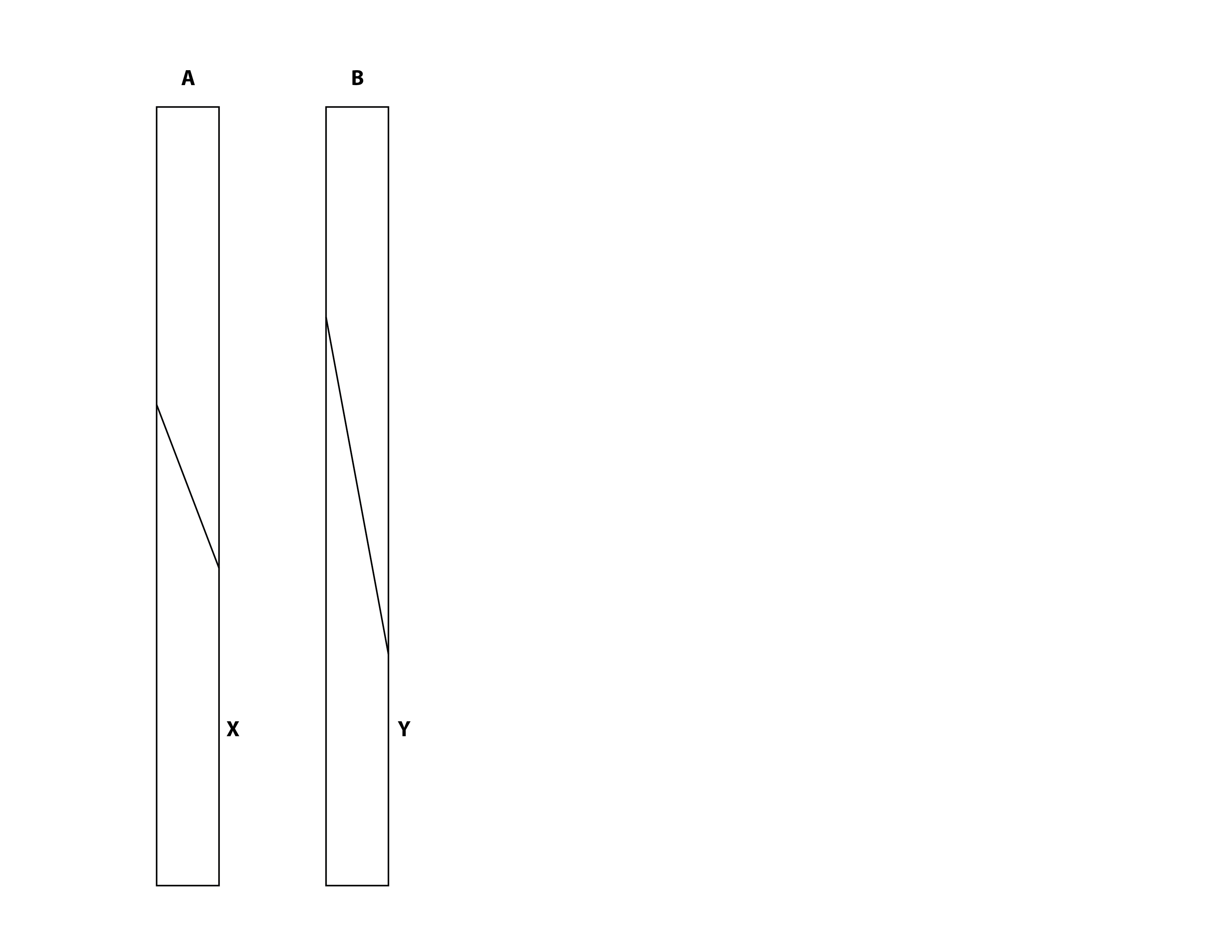 If you consider the physics of this, the B wedge is going to apply more outward force on the cleat attached to the wall then the A wedge for a given amount of weight supported. So you might cause the attachment to the wall to fail long before you would be reaching the capacity of the bolt's shear limit.

Generally a relatively shallow angle will give you all the support you need as you really just want it deep enough to keep the supported item from popping off the cleat.

If you are concerned about the amount of weight supported, use a wider cleat not a steeper angle on the cut.

Bottom line: Between your two diagrams, the LEFT one is the better choice.

My imperfect grasp of physics would tell me that the strength would be equal in both cases, however, B is more likely to jam & be hard to remove later.

The downward force is equal in both cases, the adhesion/grip force will be greater in B.
There's potentially a leverage force also in B, but my high-school physics says that will be too small to come into play. I'd guess it would jam solid long before leverage would pry it off the wall.
The other reasoning against any leverage factor is that the vertical outside faces will come up against your opposing cabinet/wall & prevent further slippage.

If "everybody" says french cleats go at 45° there has to be some empirical if anecdotal evidence gathered over the centuries to support that as a sound theory.
Balance between 'easy to knock off' vs 'will become irremovable' probably lands half way - 45°

The 'strength' of a french cleat is likely limited by the wall & cabinet fastenings, not the joint profile. All the force is really in compression between the two cleat faces.

I don't know that the strength really lies in the angle. If I were picking, I'd go with X over Y, but because you don't want to create too much of a wedge between the cleat and the wall (Y will put more stress on the cleat fasteners). The bevel helps it not slide off the cleat.

The main advantage of the cleat is you can mount a board to the wall in a secure fashion before you hang your heavy item on it.

You only need enough angle that whatever is being held won't get inadvertently bumped off the wall. For heavy things, that's not much at all. For lighter ones, a bit more angle may be needed, but A is already excessive, IME. 15 degrees (or 75, if you prefer to think that way) is plenty.

Strength comes from length first, thickness second, and width (height, as mounted) last. No point in making the cleat shorter than the object to be held is wide.

It's a balance between additional stress on the fasteners and the outward force from the torque applied by the weight of the object and its leverage, or distance out from the wall.

Imagine a 12" wide shelf attached to a 6" vertical, forming a 2:1 lever arm. Place a 10 pound object at the outside edge of the shelf: this applies 10 pounds downward force, resulting in:

A large angle (B) on the cleat would mean large forces applied sideways to thin wedges of wood.

Also ensure that whatever is being placed on the French cleats has a tall enough back-plate that the leverage is not extreme. One rule of thumb would be to make the back-plate height at least 2/3 of the distance the item extends out from the wall, and it should end on a cleat.

Not the answer you're looking for? Browse other questions tagged woodworking cabinets workshop or ask your own question.

5
How thick should a french cleat be?
10
What is the recommended number of teeth for making finish cuts with a miter saw?
0
PC in desk build
10
Recommended screw fastener length
1
How to cut a 4x4 fence post lengthwise and at an angle?
2
French cleat mod?
1
Caster type and placement for rotating cabinet
2
What is a good material to block all light from a window with?
1
Floor standing U wood frame built at home - what to use for a 90 degree joint?
0
Best fasteners for french cleat wall