Oven heating element just blew (WOW!). Went & killed the breaker. Clock on range is still running. And is flipping me off

Okay, so I (clearly) survived the night, along with many since, as I have awaited the backordered OEM part.

So today, I pulled it out the unit, and fully-unplugged/disconnected the unit. It's worth noting that, right after there was the kaboom up until today, the clock has read merely:

This is only interesting because try as I might, I cannot find ANY manufacturer that has "75" as a fault code.

Regardless, I replaced the heating element, turned everything back on, and... no luck. Oven's still dead. Rangetop works fine. Just nothing digital.

The clock - and I did my best to accurately reproduce this, both in brightness and shape - however NOW reads:

...which, quite aside from the fact that I don't even need to LOOK to know "8 Phi"/"B Phi" isn't a valid fault code. Hell, even if I assume it's trying to phonetically tell me "eighty-five" (...or "beefy"?): no luck there either. Neither appears to be a valid code for any mfg.

I'm guessing when it arced it grounded to the body of unit. New ECB is next. Sigh.

Oven heating element just blew (WOW!). Went & killed the breaker. Clock on range is still running? Do they have a battery backup or something? Is it possible the breaker (a gfci breaker, which was a new one on me, also) is still letting 110 through?

My first day in here I took a circuit tracer to every outlet, switch, and fixture in the place (that's totally normal, right?). I'm damn positive it was the correct breaker.

This is a rental place here, and the wiring is JAN-KY. Like 15 outlets (5 rooms) on the same 15a circuit janky. Like 100A service on a 4Br 3ba that is itself only 1/2 of a duplex janky. Like half the outlets couldn't hold a plug in em when I moved in janky.

How worried should I be at this point? I'm prepared to assert with some confidence after the Tesla Coil BeyouuuutGrongGrongGrongBzzzzzzzat! sound accompanied by the ballistic fragments of metal and at least MOST of its magic smoke's release that continuity was broken. It's also in the 40's here, so I'd really prefer NOT to kill the main if I don't gotta.

The unit is a Admiral (which I swear I'd thought was a Harbor Freight brand): LER3330AAZ https://www.partselect.com/Models/LER3330AAZ/

And just to be thorough: 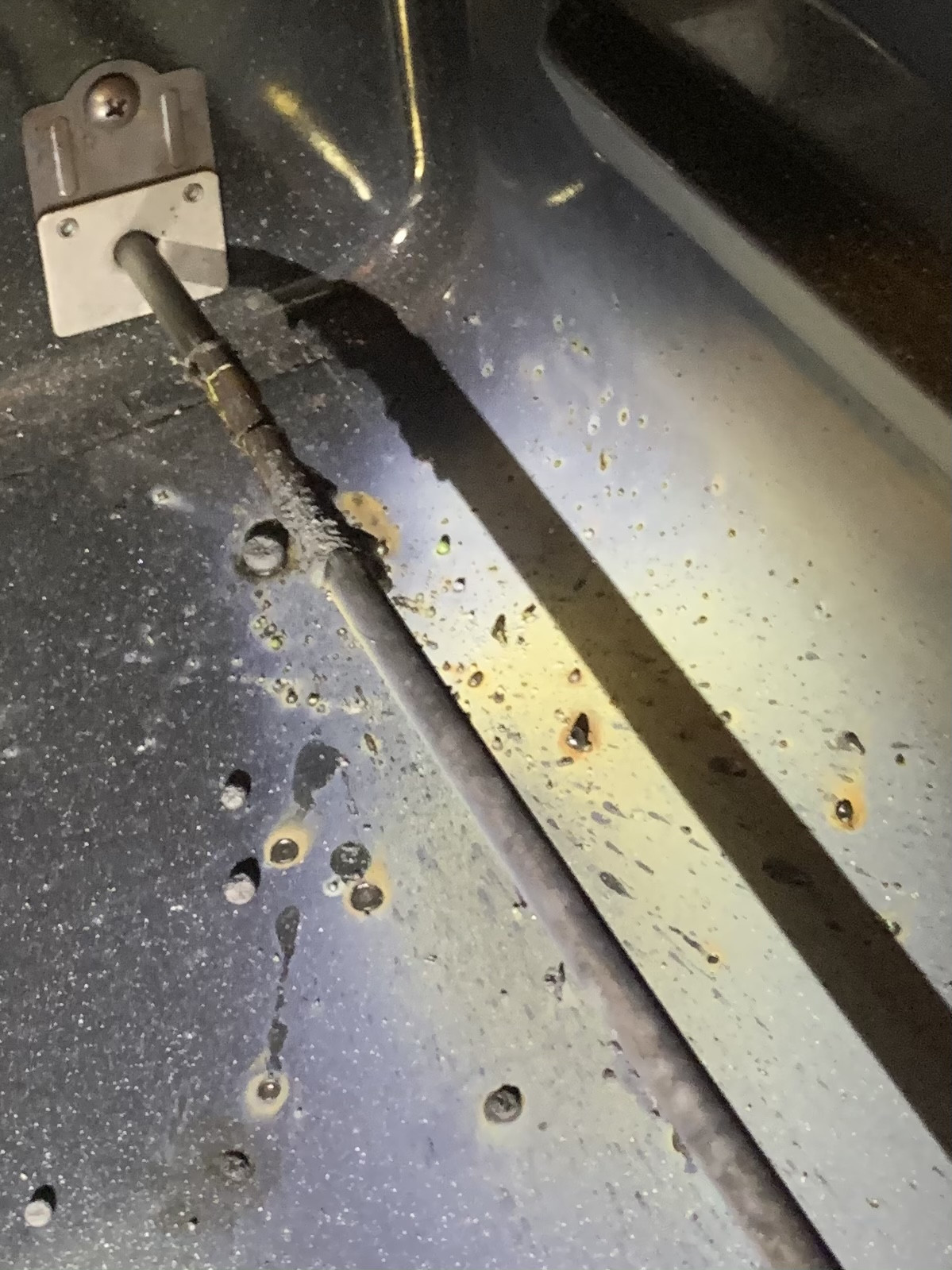 To be clear: I'm asking how dangerous, if at all, is it to leave plugged in, possibly to a (partially?) live circuit? Getting it pulled away from the wall ain't gonna be pretty. I live alone (no little hands at risk. Just me. And I prolly have it coming...)

Edit: that is, leave it until it's full light and I can manhandle it into the open. I'm twitchy because that sure LOOKED like a ground fault, and it's all stainless... I don't really wanna move it until daylight.

That is a very common fault for a heating element. Check and see if the stove top works, the fault may not have tripped the breaker. Most older homes have a 40 amp circuit double pole for a range and 50 amp is becoming more popular. (If in another part of the world a different size breaker is possible) A 120v oven doubtful 120v GFCI very doubtful with older wiring.

If the fault tripped the breaker it is safe. If the fault did not trip the breaker don’t use the oven and it should be fine until it can be repaired by you if you own the oven/range or by the land lord.

Appliance repair is not covered by the NEC the premises wiring is.

If it can be unplugged and it would make you feel better unplug it if plugged in. I always unplug or verify the power is off prior to replacing these elements (a very simple job).

If the clock is on the oven/ range it most likely did not trip the breaker.

With the original post stating the clock was on but not mentioning it had a strange reading I did not think to mention that when the element blew it may have fried the controller.

The high current short in some cases vaporizes the traces on the control board some cases just the oven won’t work in others the metal slag from the event shorts out the controls.

With the damage to the board a new board may be needed. It has been a while but the control board can usually be found on line. I think they come in white and black but that could be a different brand. The relays that turn on the elements are on the board so when there is a short from the element failure the traces turn into the fuses.

Search for your model # and you may find one under 50 but they range up to 150 range actual prices are off topic because they are always changing.

Not the answer you're looking for? Browse other questions tagged electrical circuit-breaker 240v oven range or ask your own question.

1
Sauna tripping GFCI
0
Oven heating element receives power when off?
0
The oven in my range has stopped heating up, but the burners still work
0
Heating element in oven not working - can I still use it?
4
Need some help with wall behind rangetop
2
Oven broiler has stopped working, but broiler element seems fine
0
Oven "flickers" in power every now and then