What is the risk of using tandem breakers in a panel that doesn't allow them?

This panel allows 10 tandem breakers, but as some of you know the older QO double breakers (without the hook) fit anywhere just fine. I used two but I wonder about risks of using more.

Assuming no shared neutrals or mwbc what are the risks of using a few double breakers?

The problem isn't what you think it is

As you have noticed, your panel is not Circuit Total Limiting (CTL) as Square-D has dropped support for CTL from the QO product line. This was done in response to a 2008 NEC (and corresponding UL 67) change that permits panels capable of providing more than 42 circuits. However, unlike Homeline panels which, save for a couple of oddball models, support being fully double-stuffed, QO panels still state a limit on the number of double-stuff (tandem) breakers you can install in them, despite no longer using the CTL QO tandem breakers (QOTxxxx). (They use the old, non-CTL QOxxxx tandem breakers instead.)

This limitation still remains because while your panel can accept 54 breakers, it doesn't have the neutral terminals to support landing 108 circuits. According to the Square-D drawing for your panel, your panel was designed to accept 18 tandem breakers for a maximum of 72 circuits; however, according to the photo you posted in chat and I'm reposting below, you only have 55 neutral terminations available. While this number can be increased using QONK neutral kits, those aren't compatible with "long body" breakers (xFCI, SPD), which limits where in the panel they can go.

As to positioning, that's not too hard to fix. I'd start by swapping the handle-tied pair of doublestuff QO breakers in spaces 17 & 19 with the two-pole 20A breaker in spaces 47 & 49, which takes care of the right side of your (inverted) panel. As to the left side, I would remove the SPD from 38 and 40, then take the double-stuffs out of 6 and 22 and the AFCI out of 8. The AFCI then goes in space 22, the SPD in spaces 6 & 8, and the tandems we removed are reinstalled in spaces 38 & 40. However, due to the lack of CTL support in this panel, and the fact you haven't exceeded the circuit count the panel supports by any stretch of the imagination, I would rank this as a "nice to fix" problem since you don't have the normal risks of neutral terminal shortages and damaged stabs to concern yourself with. (QO CTL worked through a cam that engaged in a slot in the outer backpan mounting rail, so it never had problems with oafs damaging stabs to begin with, even.) 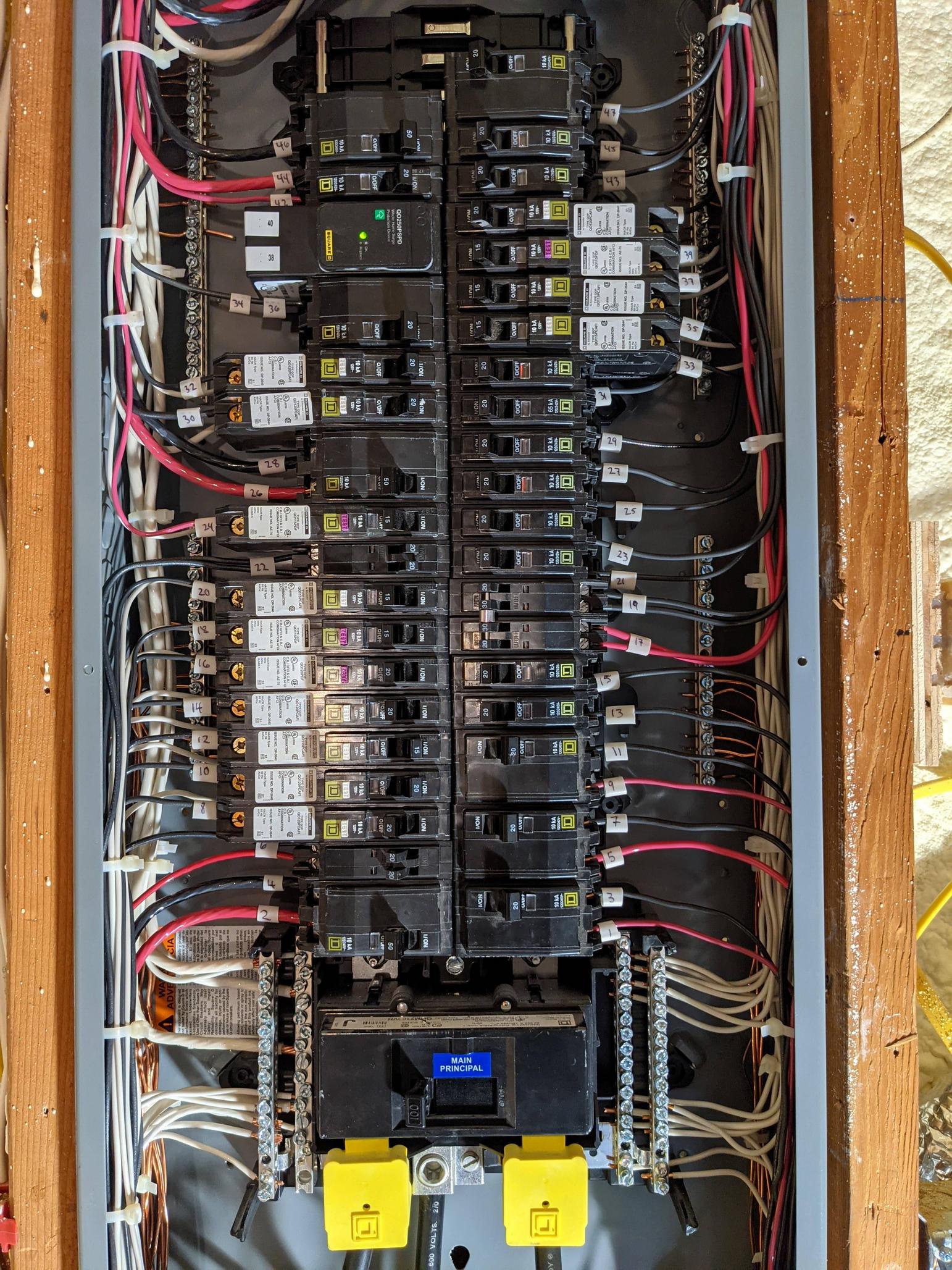 One risk is that if something goes wrong and it catches fire, your insurance company may investigate, discover that you've used breakers in the panel that are not rated for it and decline your claim because it was an illegal installation.

That means that the couple of hundred (maybe couple of thousand?) that you save today by not installing a sub panel to give you loads of extra breaker space could end up costing you hundreds of thousands down the road when you have to replace your house & all your stuff yourself instead of having your insurance company do it for you.

4
Using a 30-amp tandem circuit breaker for a 120/240v circuit?
1
GE Load Center Q's
3
Replace Old 200A Main Breaker with Newer Breaker
2
What to do about breaker that triggers main panel, and breaker that's stuck?
1
Rating for #2 Aluminum XLPE underground utility feed
3
Legal/safe? Neutral in box goes to different panel than the one that provides the hot
2
Can I add a 125amp panel to a current 125amp main panel?
3
How can I have one circuit always utility powered while all other circuits are either generator or utility powered?