Getting plumbing on the other side of support beams

Had some 2nd-story plumbing start to fail in my 1950's home, so I had the brilliant idea to re-do a "mud-job" bathroom. It included removing a non-load bearing wall from the adjacent bedroom's closet to add square footage. In spite of how arduous the concrete removal was, everything was going well until I got all of the subfloor up to see there is a support beam standing in the way of where my old plumbing was and where I would like to get to.

Pictured you will see the old plumbing coming up from the stack, my closet flange, air vent, and drain pipes that used to run to the tub + sink. Yes, I am aware that one joist (among others) looks terrible and luckily I am in a position to replace or sister all the joists so that will be happening.

My issue lies in the support beam headers. In the other picture you'll see a red circle which is where I would like the closet flange to go, but I'm not sure any layout would allow for me to actually put one there. According to my county inspector, I can notch those or even bore holes with the same rule of thumb as joists, but I'm not sure I feel comfortable or safe doing so.

I can't go under, as my kitchen ceiling begins. Their cabinets go ceiling high, so a soffit isn't even an option.

The other option I see is where the blue circle is. Basically, still push the closet flange back but up to about where the beam starts and head off that joist where it would be going. I'd end up packing out the wall and building a chase in the room for just the toilet. Maybe even have enough room to keep a small closet on the other side.

Still, that would be disappointing and I'd lose some of the space I was hoping to gain. Are there options for getting me on the other side of those support beams? 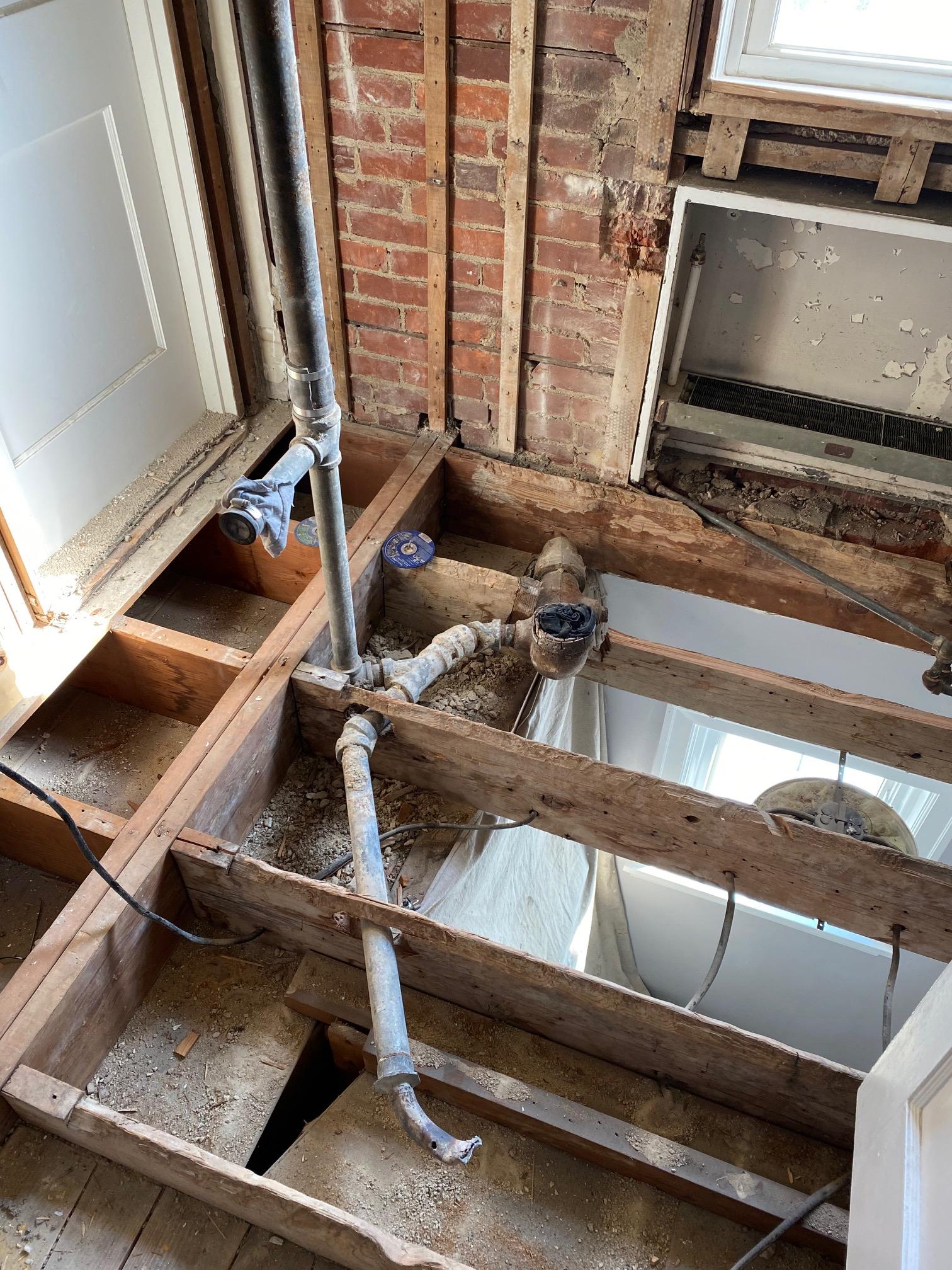 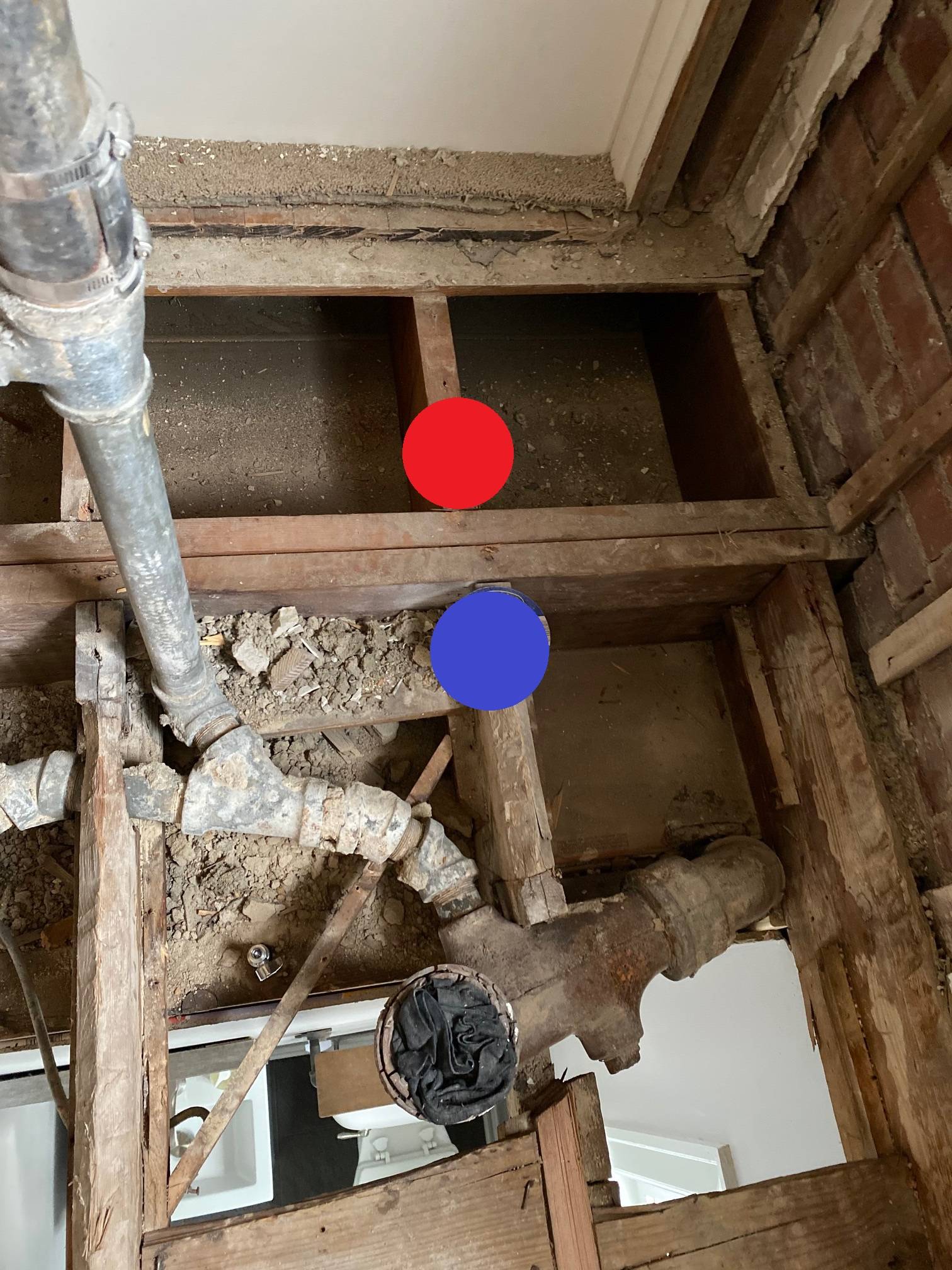 Looks like you have a 4' x 2 x 1 1/2 cast iron specialty fitting -hub and spigot pipe existing. If so, why not cut it back to the stack and reduce it to 3" ty at the top of the stack so you can run the vent straight up the outside wall until you tie it back into the existing vent. This will to allow you drill through the double beam (not sure 2- 2x10s?) to get to your red circle area with only a 3' pipe. Try to put a 3 x2 wye horizontally as close to the first ty to pick up your other fixtures. I would move your red circle 4" or more further from the outside wall so the hole to penetrate the double beam is in the second bay. Still kinda close to the end of the double for the 1/3 rule but better than the first bay. I would have the inspector confirm your plan as acceptable if he is going to inspect the finished work.

I wanted to follow up on this in case anyone stumbles upon it. I actually ended up using a relatively new solution -- a 2810HR Joist Reinforcer. It's a 14-gauge steel plate which allowed for a larger bore (in my case I made it 4.5") through a 2x10 and I put one on each side of the headers. The IBC/IRC certification they have for the plates passed inspection with no issues.

Only recommendation I would make is to get a better square bit to drive the screws than the one the company provides.

Otherwise, it got my plumbing where it needed to go and it's incredibly sturdy so I'm not worried about the strength of support. Hope this helps someone in the future! 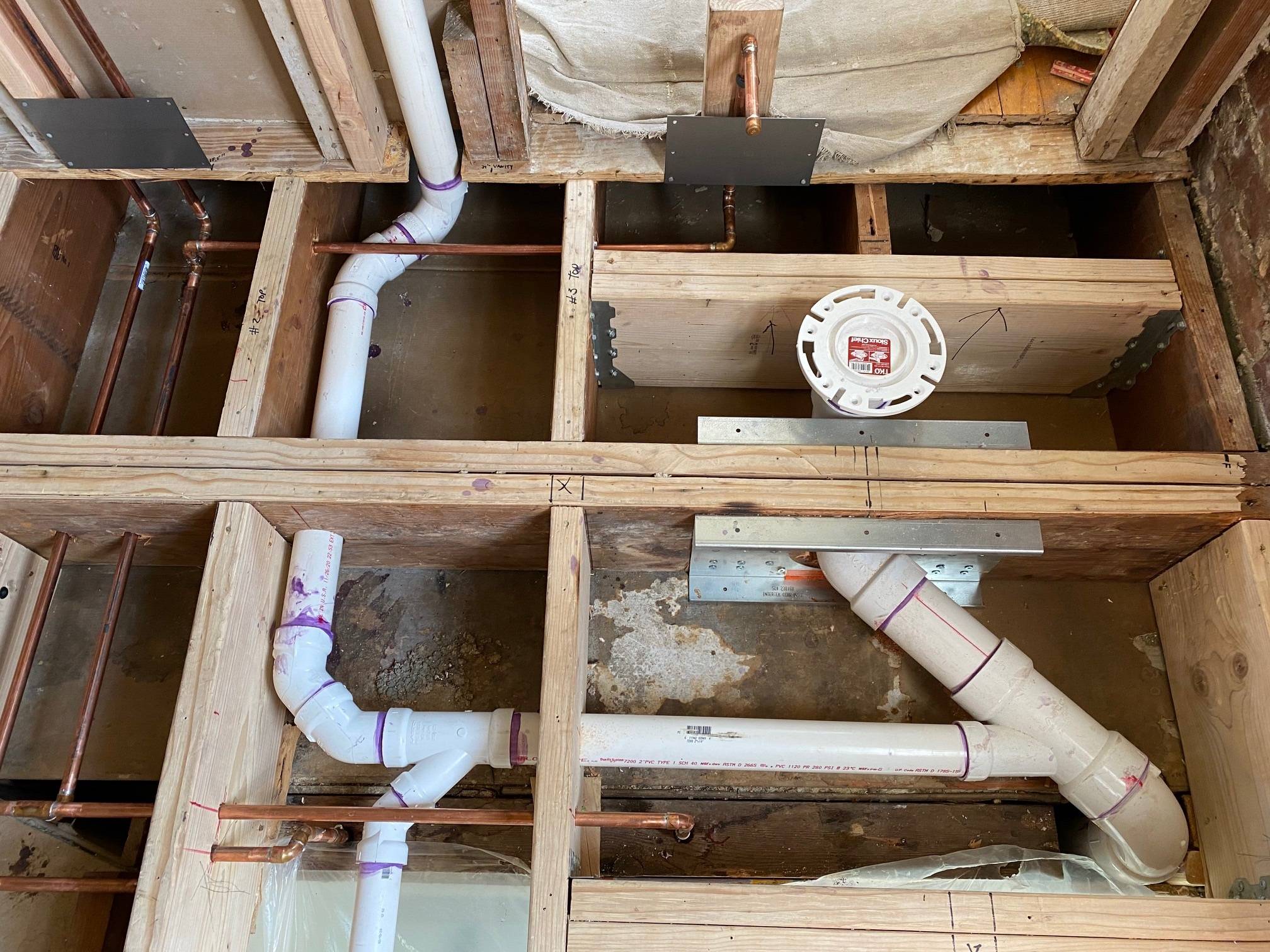 Not the answer you're looking for? Browse other questions tagged plumbing joists support or ask your own question.

6
What does blocking refer to in relation to floor joists?
5
What should I do about this load bearing wall that is only supported by a joist floor?
5
How to support the subfloor around a toilet between I joists
8
Structurally required? I-beam support under stair opening header
1
Deck Joist Hanging Options
1
Should I reinforce these joists at the central beam? If so, how?
1
I-joists on an old dimensional lumber floor
2
How to fix a joist that has been cut out