The big question: what is this called, and is this something likely to exist as a retail product a local store somewhere in South Florida is likely to sell, so I could get my hands on it quickly & not end up having to spend $5-15 shipping on what's probably a cheap part? If so, what kind of store would I go to? Auto parts? Plumbing supply?

From what I understand, 1/8" FIP/MIP pipe fittings might have 3/8-24 threading, but pipe-threading isn't quite like bolt-threading, because it's designed to seal liquids as well as fasten them together, so screwing an antenna into a "1/8" pipe fitting could/would chew up the threads on the antenna, or fail to secure enough of it to prevent it from tearing out.

Get yourself a chunk of mild steel or aluminum, some drill bits, and a couple taps. Build a two-sized coupling nut. You probably have a neighbor who has a tap set. You may want to use jam nuts to lock the rods into the sleeve.

Use a piece of C-channel or box tubing. Drill opposing holes for the two rod sizes and attach them with nuts inside and out.

Drill offset holes in a chunk of steel or aluminum bar stock for each rod size. Nut them each from the top and bottom faces.

Use a 3/4" black iron plumbing nipple and caps. Drill the center of a cap for each of the two rod sizes, nut the rods inside and out, and snugly connect the caps to the nipple.

If you search for antique lighting parts supplies, you'll find "hickeys" ready-made that are essentially what @isherwood describes as #1 and #2. The first picture are a couple of hickeys from my box of lighting junk. Neither of these are in the sizes you want but they come in different sizes. There are also reducing bushings such as in the second picture, which I got from https://www.antiquelampsupply.com/ ... poke around there or if you can find a local antique lighting dealer they might have what you need. 3/8 and 5/16 are definitely among the available adapters .. I'm not sure if the thread counts you want will be found in lamp supply but it's worth a look on line.

I should add that you probably should add locknuts for your application especially if the antenna is outside. You won't find actual locknuts in antique lighting supply but you can double up regular nuts on the threaded pipe and/or use thread cement and/or buy locknuts from a regular hardware store. 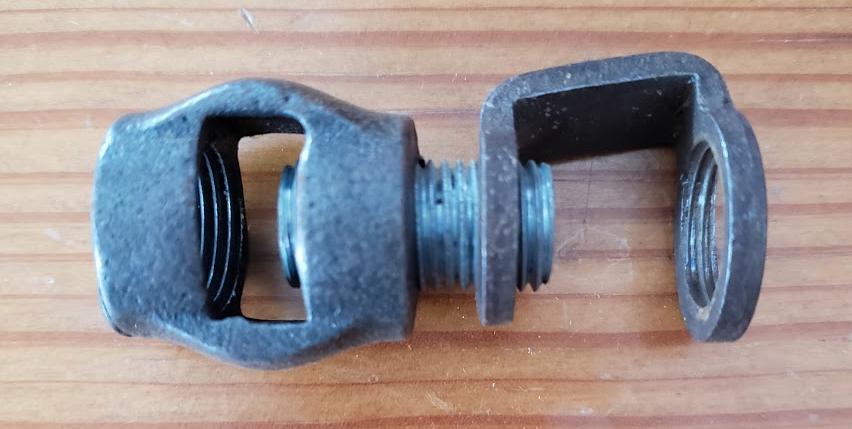 Not the answer you're looking for? Browse other questions tagged threading or ask your own question.