I'm encapsulating my crawl space and as a part of this I'm installing a sump pump with a perimeter drain around the inside of the crawl space that leads to the sump pump basin. I installed the sump pump in the back corner of my house. I have a Zoeller M53 sump pump and a 24" x 24" basin. 10" from the top of the basin, I drilled a 4" hole for the inlet pipe. I then made a bunch of smaller holes all around the basin and made them small enough that the gravel won't spill through. None of these holes go lower than 12" from the top. So none of the holes are lower than the inlet pipe.

My reasoning behind this was that I wanted all the water intake to happen above the switch on for the pump. In other words, I didn't think I would want my pump to be pumping out water that was already over a foot deep underground. I also didn't think I would want the holes to be within the range of the pump turn on and off levels. Otherwise, it might lead to short cycling. If the water was already low enough in the ground, I figured it didn't need to be pumped out.

A few questions I have regarding this: 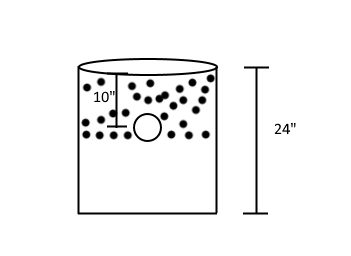 Generally you want the holes at the bottom. This allows you to remove the maximum amount of water from under your slab or foundation. You will not pump out the entire ground water supply as it takes a finite amount of time for ground water to move toward a low-pressure area.

So your sump pump will create a "dip" in the ground water level around the sump but that's what you want to happen.

Not the answer you're looking for? Browse other questions tagged plumbing water drainage sump-pump crawlspace or ask your own question.

5
Sump with no pump!
2
How do I install this sump basin?
0
How do you stop basement waterproofing sealant that is coming into the sump pump basin from the foundation drain pipe?
0
Sump Pump Minimum Basin Height
1
How can I effectively drain foundation water along the sump pail location?
0
Can only use small sump pump basin in crawl space, what can I do to prevent short cycling?
0
Sump pump horizontal distance - Why do 90 deg angles put more load on the pump after a vertical drop?
1
Can Sump pump basin depth cause damage