Can i use Existing Light fitting to power video doorbell?

I have the feeling the answer is going to be no but let's see.

Currently i only have a light switch and ceiling light in my front porch and no power socket.

I want to install a video doorbell that i want hard wired and need a power source for it. So i was thinking to use the power adapter that came with doorbell and connect the live and neutral wires to it.

The adapter inputs in 230v and outputs 24v AC to the doorbell.The pins for outlet are removable and interchangeable for different outlets in different countries. So I was thinking to take it off and attach wires to the Live and neutral contacts to give it power. t Theoretically getting power from it in parallel from the ceiling light. Essentially I want to connect the adapter parralel to the live and neutral wires going to the light fitting. It looks unlikely this would overload the circuit as the adapter is only pulling 24v 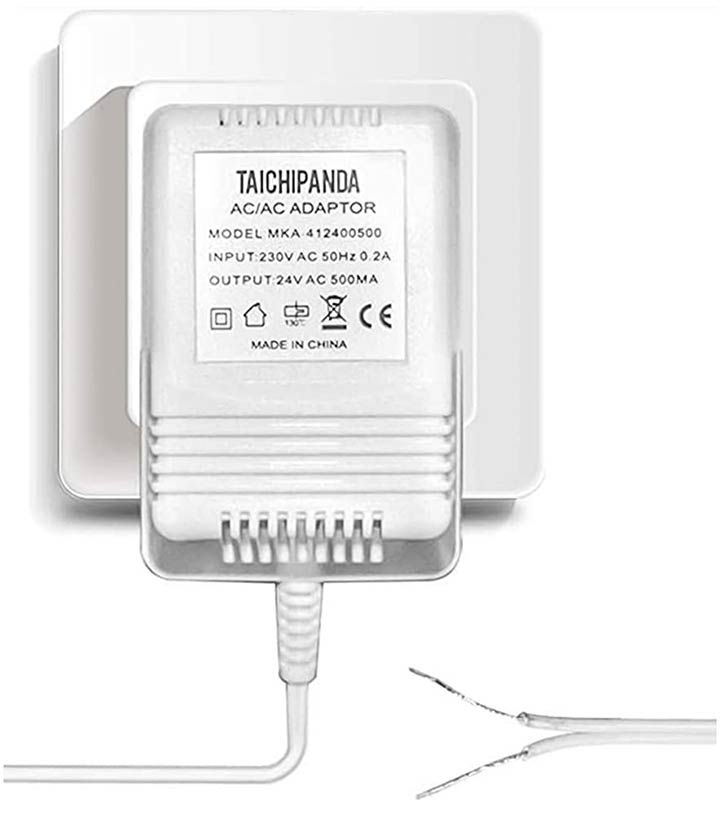 Then I will cover whole thing with some wood or plastic casing.

Sounds like it may work, but I'm no expert. So can this work or any other ideas that might work for this situation?

This has great potential to become a hokey fix-up DIY bodge, but try not to be tempted into cutting all the corners.

BTW, you said it's "only pulling 24v" which is incorrect. It's pulling 240v, but only 0.2A
That's actually less than half the power consumed by a 60w light bulb, so even if your ring is running a chandelier in the hall too, it's unlikely to be anywhere near maximum capacity, which is 5A.

Right. That settled, onto the bodge…

Is it to building regs? No.
Is it actually going to hurt anything if you do it properly? No.
Would I do it? Yes.

Late edit.
I feel I ought to clarify this, reading back.
The ring main runs round from light to light, not from switch to switch, so directly above the fitting you can get to it - but it's in the porch, so it's not weather-proof enough for a cheap switch-mode power supply. You have to find another segment of the ring indoors to wire from (not the drop to the switch, that's not in the ring.)
End of edit now read on…

Do not place it outdoors, even in a porch, no matter what you box it in. That it has air-vents tells you it needs some airflow, so you cannot box it up tight enough to be placed outside the main building. It will get just enough airflow placed in the ceiling so long as it's placed in free-space.

To get it closer to building regs, if not absolutely to spec, you really ought to put an old-style 5A socket on a joist in the ceiling space & plug it to that - that way anyone who finds the socket in the distant future won't expect it to be on the ring main at 13A. That would also allow you to correctly earth the socket. At a push, put a 13A socket in & label it 5A Lighting. Use correct boxes at any junction you need to make - no insulating tape, no free-floating terminal block & no solder, thank you very much.

Of course, by the time you get up into the ceiling space, you might find you're close enough to a regular ring main to just run a spur off that, legit, kosher & above-board.

If there was any part of the simple terminology I've used in this answer that you don't understand, get an electrician ;)

You do not have any issue with the capacity of the existing circuit to power this device. Your issue is how to create the connectivity safely. The solution you describe with DIY connections at both ends of a 230V wire, one end soldered(??) onto a cheap plastic PSU in place of its plug and the other end somehow connected to an existing outdoor lamp, you don't say how. The answer is do not do this.

Get an electrician to install a power socket at the location most convenient for you. The electrician may or may not tap off the existing outdoor lighting circuit, but it will be done safely. Once that is done, you seem to have the knowledge to run the 24V wire to wherever you want it and connect to the camera there.

If you want this to be a DIY project, read the other answer here about ring mains and spurs, buy a book on home wiring, watch some videos from knowledgeable people and set out to install a new power outlet properly. The kind of tinkering you are describing can be done on the 24V side of this PSU but you are wanting to do it on the 230V side. Don't.

New answer, new approach: If you want to avoid the expense of installing an outlet properly, an unsafe botch that would be vastly preferable to the one you propose would be to just run an extension cord from the nearest existing outlet, wherever that may be, to the location of the camera, with appropriate fasteners to run the cable along the wall or baseboard rather than loose on the floor. This is still not a good idea but it's much safer than your idea and probably a little less ugly.

Not the answer you're looking for? Browse other questions tagged electrical receptacle light-fixture ceiling doorbell or ask your own question.

6
Using Both Sonoff Wi-Fi Switch and Existing Wall Switch to Control Light
0
Light Fixture - power but no light
1
Wiring up new light fitting
1
Replacing pendant light but reusing existing chock (UK)
1
My ceiling light won't turn off, how do I wire it up correctly? (UK)
2
Ring Doorbell - upgrade chime and transformer?
0
What Transformer for Smart video Doorbell
2
How can I get this light fixture to light up?