Will this plumbing setup result in galvanic corrosion?

When I moved in two years ago, the plumbing in this area showed significant corrosion. There was no galvanic isolation between the steel pipes leading to the upstairs bath, and the copper piping in the basement. I updated the entire thing to what is shown below (cold water stack is labeled -- the hot water stack to the left is identical).

The two valves at the bottom (shutoff for laundry sink) failed last month, the cold one broke off in my hand when I needed to close it to work on the laundry sink. When I replaced it I noticed that the hot water side was leaking, this one failed when I went to remove it (luckily water was off). Both valves failed at a joint in the valve that appeared pressed together, and showed some signs of corrosion inside.

In the photos below you can see that the threaded nipples below the valves show some corrosion. I assumed this was due to the leaking valves. I also assumed the valves failed due to a faulty design of the pressed joint. But to avoid having to do this repair again in the future, I want to confirm if this set-up did/will result in galvanic corrosion, or if I was just unlucky in choosing a poorly designed valve.

If it's relevant, I am in Wisconsin on city water, and both hot and cold water are softened. 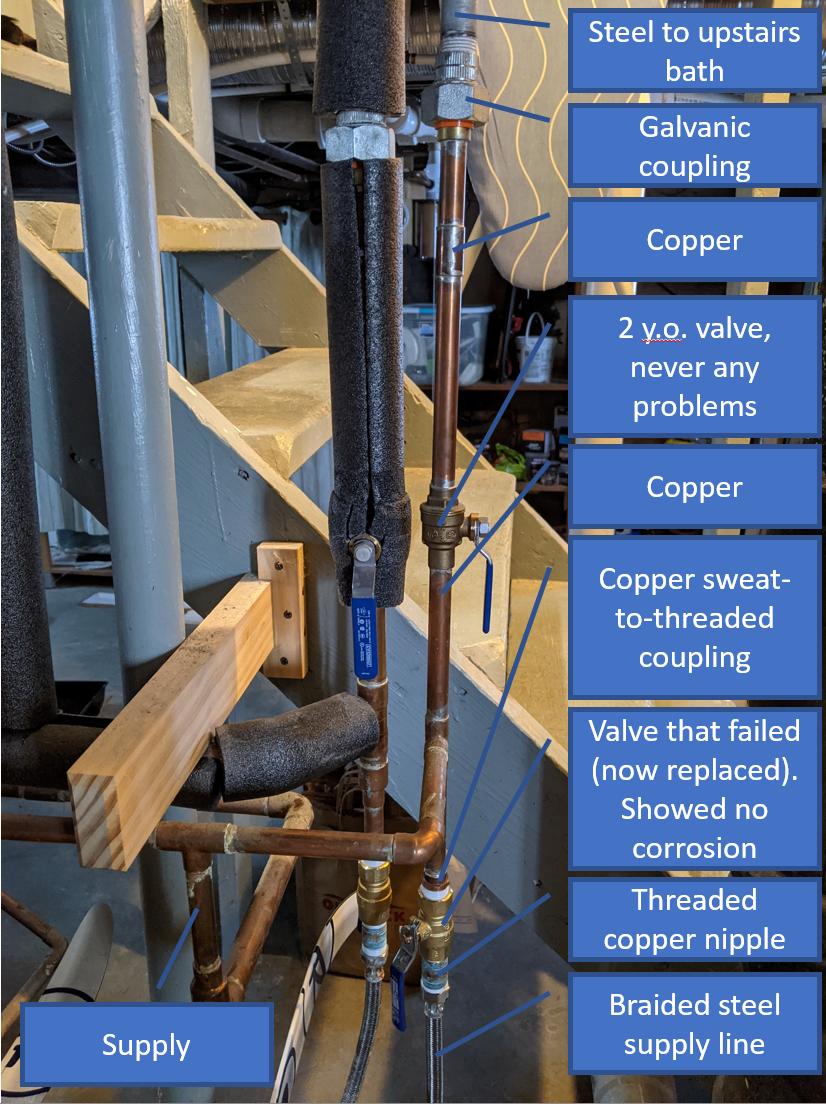 Looking at your photo I believe I see the upper 2 pipe unions appear to be dielectric unions, notice the orange insulators. Dielectric unions isolate the copper to steel and would be the industry standard way to connect copper to galvanized pipe. The lower pipes are flex pipes most commonly nickel plated brass with a plastic liner so no problem there either. It appears if anything the wrong type of nipple was used those fittings are for compression type not pipe thread thus the most probable reason for the leak. And the mass of Teflon tape that they tried to seal things with.

Ball valves can get sticky due to contaminates in the water (no corrosion statement would point to this) even the cleanest water and non use of a ball valve can cause a failure.

Corrosion in a domestic water system can be caused by a number of things. The big one that you already dealt with is galvanic corrosion resulting from connecting steel or iron water pipes to copper. This corrosion can be mitigated by installing dielectric connectors. They won't necessarily stop the galvanic response entirely but will certainly minimize it.
But corrosion is also caused by the composition of the water supply and other factors such as using the wrong type of flux or too much of it. This situation can be made worse if inferior thin-walled copper piping was installed at some point.
The point is that without knowing all the details of your water supply system no one can tell you that you won't have a future problem with galvanic or other corrosion in the future - you probably will. Like all of us you deal with it at the time.

Not the answer you're looking for? Browse other questions tagged plumbing galvanic-corrosion or ask your own question.

2
Do I need to shut off the gas to my water heater, when I shut off the cold water intake to fix a leaking hot water faucet in my basement sink?
1
Hot Water stopped working in Kitchen Faucet
1
water not turning on for washer supply valves
1
How to loosen traditional faucet stem?
0
No hot water from kitchen faucet yet there is still water flow through hot water valve
0
Could old gate valves be causing low pressure at the faucet?
0
Dealing with build up from galvanic corrosion in supply tees