Ultimately I'm looking to use a C wire for a Nest thermostat, but upon looking at the HVAC panel I'm confused by the wiring. 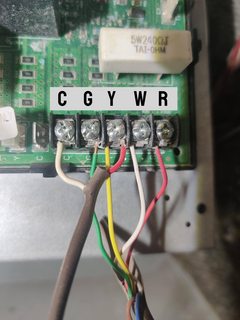 There's a grouping of wires going from the HVAC panel to the thermostat: the green, yellow, and leftmost red and white wires. There are also blue and brown wires which are unused currently but presumably could be used as a C wire.

The part that's tripping me up is that second grouping of wires: the rightmost white and red wires. The other end of that grouping isn't by the thermostat, and I don't actually know where it terminates. Both groupings of wires leave the HVAC closet at the same point.

Does this wiring suggest any likely place that second group of wires terminates? Even if I leave the second grouping in place, can I just attach one of the first grouping unused wires alongside the white wire that currently lives in the C terminal?

The second set goes to an A/C compressor (or was provisioned for it). You can double up two wires under that C terminal with one of the spare wires.

Not the answer you're looking for? Browse other questions tagged electrical wiring hvac thermostat-c-wire or ask your own question.

1
Can I connect two wires to a single screw terminal in my HVAC system?
1
HVAC wiring for wifi thermostat installation (Ecobee) gas furnace + AC
1
Red Wire labelled as 'Common' in HVAC
2
Setting up an ecobee and need to adjust HVAC wiring
1
Installing a smart thermometer (ecobee4) can I move the wires around on the HVAC?
1
need to connect a c wire to my furnace/air conditioner
0
Wifi Thermostat, No C wire on HVAC unit. No control board? Condo
2
Wiring HVAC for smart thermostat
1
Connect C wire for nest thermostat on a zoned HVAC system