I recently had frozen pipes in my basement. I took some drywall down to identify the location of the frozen pipes and to apply heat to thaw it. It appears the frozen section is somewhere about halfway between the ceiling and the floor, as when I used a hairdryer directed there it thawed the pipes. The pipes run along an exterior wall which has a layer of insulation and vapour barrier between the wall and the pipe, and then another layer of vapour barrier and insulation between the pipe and the drywall. At first I was upset, as this is a new home and I thought it was poor workmanship; but once I noticed that they actually had 2 layers of insulation and vapour barrier, I began to realize it is most likely they just didn't catch a cold spot which is in actuality making it more of a cooler behind the wall rather than a warm spot. Also, IMO, any insulation between your warm house and piping, especially against an exterior wall, is just going to buffer the warmth from reaching the pipe. But I will see if that is up for debate.

Below I have included 3 pictures of the area. The two pipes running vertical are the hot and cold feeds for the washing machine. The T-connector is a feed for the downstairs shower and also runs behind the wall. The entire column feels cold and I can't tell if that is coming from the corner stud or the top near the joist. I have certainly felt cold air coming from under the joist. The water main line runs into the wall (interior) and comes up through the wall somewhere to the left of the picture along the exterior wall near the ceiling. If having the main run in this location is an issue I can get some closer pictures for you.

In order to do this correctly, I thought of a few options: option one would be to remove the drywall in front of the pipe and install a plastic channel (aesthetics) to run the pipes on the inside (warm) of the wall in addition to insulating the vertical corner stud and gap between the foundation and the joist. Another option would be to just insulate the vertical stud and gap under the joist, repair the vapour barrier and put the pipes back. I would leave the drywall open to make sure that if I didn't insulate all the cold spots I wouldn't have to take the drywall down to thaw the pipes again.

Any other options or comments are much appreciated. 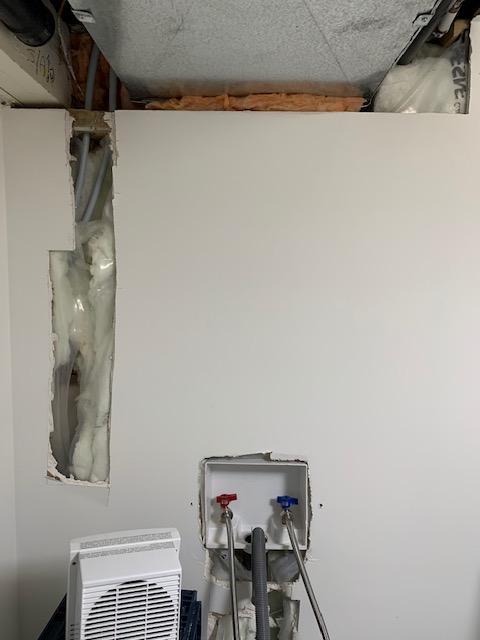 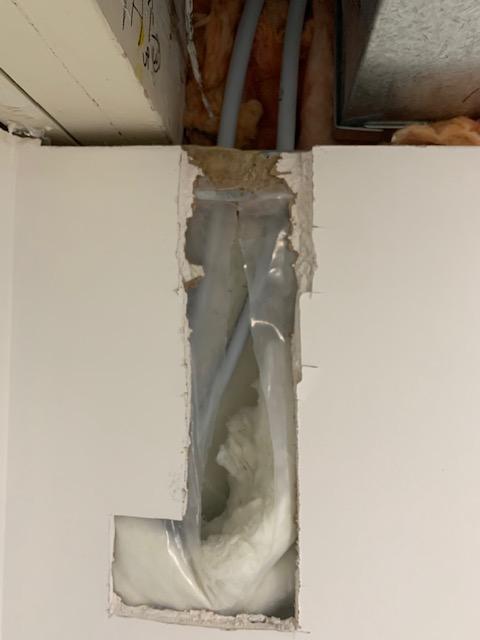 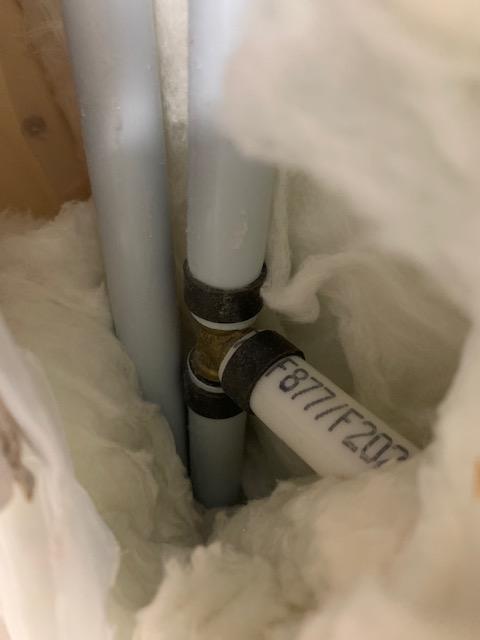 Here's what I would do. If you feel industrious, I would remove that entire cavity's worth of drywall so that the entire wall cavity between the studs is exposed. Then remove all of the batt insulation. Buy a sheet of XPS or polyisocyanurate foam board insulation, cut it to fit, and install it behind the PEX pipes and the outside wall. You want the foam board as thick as will fit behind the pipes. Then finish insulating the cavity with additional foam panels or pieces of batt insulation, but (and this is key here), don't cover the part of the pipes facing the drywall. You want the pipes to receive some warmth from the room.

A somewhat easier approach would be to wrap the pipes with the thickest foam pipe insulation you can find. But, similar to the above approach, remove a section of the pipe insulation that faces the room. You only want to insulate say 3/4 of the pipe against the cold wall, and want the PEX to be heated (through the drywall) by the room.

purchase a length of pipe insulation. It is tube shaped and made of dense foam. There's a split down the middle that allows you to wrap the tube around the pipe.

Also you can install pipe heaters that can keep the pipes warm with electricity.

It's poor design. Whether the workmanship is poor rather depends on if the workman was following a drawing (poor design) or making it up as they went (poor vernacular design/workmanship.)

As such, I'd recommend the "on the wall" approach to resolving this problem in the least complicated, most effective way.

#2 - Option #1 Place moisture resistant [Painted/Wallpapered] greenboard behind the vertical piping IF ABLE. Try to form a niche wall opening to accommodate and incorporate piping into the interior.

#3 - Option #2 Contact Homebuilder (if business shut down, contact 'Registered Agent' that was and still is listed for that business name. Ask City Hall or such other gov't. agcy.). Tell Builder of issue (preferably written, signed, date & time-stamped). Ask for Builder to pay costs/reimburse costs to RECTIFY the issue with no extra burden to you financially or otherwise [you've done your part...you purchased the home]. If no reply within 1 week, call Registered Agent by 12:00 Noon and have 2nd Request Letter Document sent by Messenger in A.M. as back-up documentation & attempt. Still if if no reply then time to file Civil Court - Small Claims Lawsuit wherein a Lawyer can locate the whereabouts of the Registered Agent and have him served! This as you can see is most time-consuming [waiting] and most expensive (filing fee, lawyer retainer fee if not Legal Aid or Student lawyer) option. CHOOSE WISELY BUT KEEP FAMILY INVESTMENT & NEEDS IN MIND foremost. Hope any of this helps!
Per ONE SPIRITUALLY-BLESSED & R.E. Wise Woman!

Not the answer you're looking for? Browse other questions tagged water insulation pipe pex freezing or ask your own question.

4
What happens when a vapor barrier is too close to the cold side?
8
How do I retrofit a junction box in an insulated wall?
1
How do I apply foam board insulation behind a new recessed shelf in an exterior wall?
2
How can I insulate pex pipes that have supports at every joist?
2
Reducing risks of interior brick wall insulation?
0
How thoroughly should I scrape paint from cement basement wall before insulating?
1
Insulation boards with foil facing outside - condensation issues?
1
Vapour barrier for insulated, occasionally-heated Toronto shed?
1
Can I use a hot water recirculation pump to mitigate risk of exterior wall pipe freeze?