To rake or not to rake snow off of roof

First time owning a house with a roof that can be raked, It is a shingled roof.

The question is - Should I be doing it?

We live in Northeast (it's snowing as we speak) and icicles do form on the roof in several places. I assumed I need to rake the roof and bought a rake. However, recently a contractor who did a the new roof on this house last year stopped by, and when I asked him about it - he said not to rake it! His reasoning was that I would just push up a potential ice dam higher on the roof to the location where it doesn't have a protection and I would only potentially cause a bigger problem. In other words, trading off a small ice dam near the roof edge to for a larger ice dam higher up the roof.

Is this legit or he's just looking to spread bad advise and get more roofing business? (kidding. I hope.)

There are really two reasons to rake a roof (snow weight and ice dams), and there are two reasons not to rake (effort and roofing damage).

Raking to reduce snow weight
If you're concerned that the weight of accumulated snow will exceed load design limits, by all means pull some snow off. You don't want a collapse. This is a rare situation in northern climates, though, as snow loads are expected and accommodated in modern construction. Talk to your neighbors about how much snow is concerning. Take an average between the Chicken Little and the Couldn't Care Less types.

Raking to resolve or prevent ice dams
Whether you rake for ice dams depends on a number of factors, such as attic insulation and ventilation, sun exposure, and weather conditions. You'll have to make a judgement call on that for a given situation.

If you have an ice dam problem, removing the snow from the lower portion of the roof may help. By removing snow from the area that's melting you prevent dams from forming. If snow is melting due to inadequate insulation, and most of the heat lost from the home transfers through the roof down low, clearing that area may resolve the issue.

It may also relocate the problem, as has been suggested. Dams occur where ice has melted and re-frozen. If the snow is insulating the roof surface, allowing melting to occur due to heat from below, the dam may occur just below the new lower edge of the snow.

Raking is hard work and damages roofing
All that said, raking is hard work. You'll get a six pack. It also will damage your shingles if you're not extremely careful--those corners have a tendency to punch through the snow on occasion. Over time you'll scrape away the protective ceramic granules and weaken the shingles. They'll curl and crack before they otherwise would have. Raking is to be avoided unless truly necessary.

There isn't general advice to give because it is dependent on the amount of snow on your roof, pitch of roof, and what the upcoming weather looks like. But you should not be touching asphalt shingles as this will actually not only damage shingle but you will sure push snow under them.

As others have said, whether to rake or not depends on your circumstances.

See the picture: I have a steep poorly insulated roof over my home that extends out over an unheated garage and becomes more shallow there. Snow melts on the steep part and water flows down under the snow to the unheated shallower roof where it refreezes and forms a dam anywhere on that part of the roof depending on the depth, weather, rate of melt and so on. So I rake the flatter part of the roof over the garage as you can see. This allows the sun to do the work and keep the water from the warmer part of the house flowing.

I would probably rake higher but that's as far as I can reach with my 24 foot rake.

You should consider the slope, depth, current and forecast temperature, amount of sun, etc in deciding. 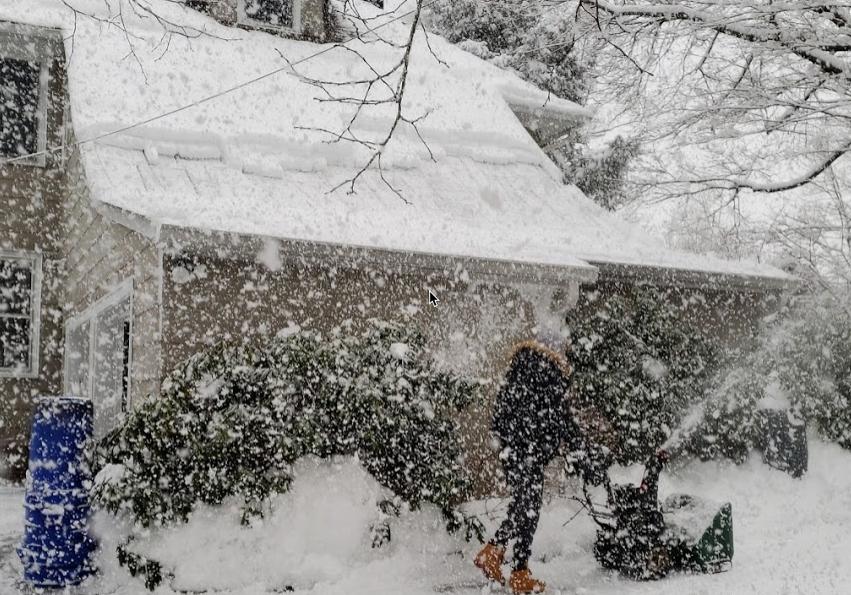 Whether to rake the snow off the roof or not depends on temperature during the day, the time it will take the snow to melt and when the next snowstorm is expected. At my house in the Berkshires, Western MA, one year we had so much snow on the roof and extremely low temps that we got an ice dam. Had to hire someone to clear the roof. This required clearing the decks to make room for the snow and then clearing the roof and a few repeats of this process. 5 hours, $500 cost. Money well spent as it saved my back. In addition, the snow on the roof was about to cover the stink pipe. The next snowfall would have caused plumbing problems as well. I then purchased a Minnesnowta roof rake and started clearing the roof anytime when more than 1 storm was expected in the coming week. There are no tines on this rake. It moves on 2 nylon wheels and uses a PVC sheet to free the snow and allow it to slide down. The bottom most layer of snow on the roof is usually compressed enough that the wheels on the rake do not go through that layer and never touch the roof shingles. It is hard work but some years, it was necessary to clear the roof and the decks.

Roof raking is a pain (especially in nasty winter weather) and has its cons, as others pointed out. Better to avoid ice dams. Consider putting heating cables in the gutters/downspouts and place the cables zig-zag on the edge of the roof to avoid ice dams forming. Also, use covers on the gutters to avoid the gutters getting clogged with autumn leaves. Clogged and frozen gutters mean that the water that melts off the roof has no good place to go. The melting water overflows the gutters and causes icicles, sometimes quite large and dangerous to anyone standing under them. (If you replace the gutters, think of using a larger size. Older houses may have undersized gutters.) The heating cables can be thermostat or switch controlled. In my experience, ice dams are a rare occurance. If you are getting frequent ice dams, there is a problem that should be fixed. See, for example, https://www.thisoldhouse.com/roofing/21017660/how-to-get-rid-of-ice-dams

Not the answer you're looking for? Browse other questions tagged roof ice snow or ask your own question.

12
How do I handle significant snow and ice dams on a 4/12 gable roof with ridge vents?
5
How do I repair/reattach downspout and gutter after snow/ice damage?
4
How can I safely remove snow from my roof?
0
Keeping heating wires secured to roof during snow removal
0
Roof eave missing knee brace - how to mitigate problems as snow season approaches?
8
What's the purpose of the throttle and the gears on a snow blower?
0
How can I prevent rain from dripping off the roof rake edge?
2
ISSUE: Snowblower pushes snow (forward) rather than throwing snow out of the chute