Is there some official or standard specification for an EK20 fitting?

I'm researching parts for a heating manifold and am confused about what size or type of fitting is correct. More specifically, what the standard size of the fitting actually is.

The manifold is a Rifeng / Vevo make, which I think is also sold under a bunch of other name brands like Bluefin. The fitting in question is for each of the loop ports - its threaded and seals with an O-ring. Example:

But I can't find any info on what "EK20" really means. I actually was able to screw on a US garden hose fitting... it went on "OK", not very smooth (but that's not uncommon with GHT). I didn't try it with any pressure or anything like that so I don't really know if it was a match [see below].

With fitting types like NPT for instance, you know exactly what will work with what. That's why I'm hoping to find some better info on whatever EK20 means, especially if brand names disappear over time.

I did come across a forum post claiming it was a "Eurokronus" fitting, but that search term seems like a dead end.

Update - I did a little test using a few garden hose caps. While they do screw on and feel like they tighten, they definitely do not seal well. I tried one under a little air pressure and it would leak. Possibly the threads are subtly different so that they aren't really tightening on rubber washer.

But also I noticed that another EK20 fitting I have has an O-ring with a much smaller diameter so that it fits within the male portion against a beveled edge; whereas a garden hose rubber washer seats on the outer surface of the male part and maybe cannot provide a good enough seal.

In any case, GHT is evidently not the same as EK20, at least in all the details.

At this point my best understanding is that "EK" doesn't refer just to a pipe thread but more specifically to a specific set of fittings used to mate a tube to a threaded device. The thread standard is just one part of what EK20 means.

Here's an example EK20 fitting, used to attach a PEX tube to a manifold: 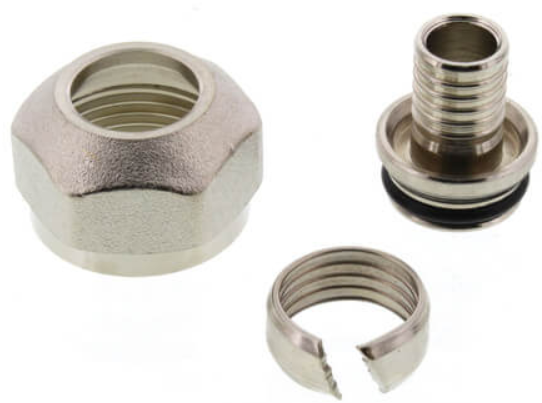 There are other sizes of the same style of connection, like EK25 (25 mm ~ 1 inch), which appear to work the same way.

I think the benefit of this style of connection is that it allows many different pipe/tubing sizes to be connected to the same device, just by choosing the right EKxx adapter. Its also an efficient 2-for-1 design in the sense that the single threaded ring secures both ends and no special tools are required.

As far as the thread itself goes, I found some product documentation from one supplier which states:

This statement is presumably accurate, but isn't as "official" a source as I would like, ideally.

Assuming that EK20 thread = G3/4 that does explain why a US garden hose thread almost fits but doesn't seal. US GHT and G3/4 are only similar:

The GHT and BSP standards are not compatible, and attempting to connect a GHT hose to a BSP fitting, or vice versa, will damage the threads.

(https://en.wikipedia.org/wiki/Garden_hose#Standards_and_connectors) Wikipedia also notes that the GHT is 3/4 diameter but 11.5 threads per inch, whereas G3/4 is the same diameter but 14 threads per inch. So the GHT female would screw on partway but then bind up and probably not make a tight seal.

A remaining unknown -- The inner O-ring I assume must have standard dimensions, given that it makes an internal seal in the EK20 male portion. But I don't yet have any information on what this standard might be. Without this detail it would be hard to know if a standard (BSPP) part would effectively seal to it or not. However, I do have some proper EK20 caps that use an external O-ring to seal (just like in a garden hose), which work fine.

Not the answer you're looking for? Browse other questions tagged plumbing heating or ask your own question.

5
How do I seal a garden hose against a nipple?
3
How do I fix a leaking garden hose connection?
2
What should I use to seal the ball rod on a pop-up sink drain plug?
2
Can I repair this cold water hose?
0
1/2“ OD Compression to 1/2” barb fitting?
0
Reattaching water meter
4
How to seal straight-thread faucet shank / nipple to the faucet?
0
A sillcock with integrated manifold