When we purchased this home we had some renovations done before we moved in, one included framing in an existing covered porch on 2 sides. The builder came highly recommended and routinely built $500k+ homes and received numerous awards for homes in the area. He was originally going to build our home from scratch but issues with the land eventually led us to find a great home built in 2000. The builder seemed to be the most knowledgeable about what we wanted to do, was not the cheapest of the quotes we received, (we met some characters), and was professional in all our dealings.

When construction started they went under the deck, dug a trench and had a footer poured, then a block mason added a cinder block support wall on the 2 outside walls, so I felt pretty comfortable in the way they were progressing.

Fast forward 5 years, I'm in the process of becoming a home inspector and I started noticing things. We had him open up several interior walls, beams were added but the support columns were not tied into the beam below causing the floor to bounce. This made me want to take a close look at the addition, today I went under and looked around, as far as I can tell there are no bolts holding down the sill plate, the center support beam not touching the 2 support columns, and only a few of the floor joists are nailed to it, and the blocks were not back filled. I am planning to shim and add clamps to the center support beam.

Question: How can I attach the exterior wall to the foundation?

Any suggestions would be appreciated.

You also might be able to use a strap tie, that fastens to a wall stud and the foundation. Something like this one (from Simpson): 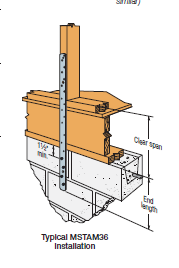 0
How to attach a new sill to an existing concrete foundation
0
How can I anchor something in the gaps between the bricks or rocks of a fireplace without damaging the masonry?
5
How can I attach pony wall to surface of platform and will it be strong enough against lateral forces?
2
Should I be worried that the anchor bolts are not centered on the sill plate?