How can I temporarily repair a lengthwise crack in an ABS drain pipe?

I have a 3" diameter by 4 ft long, vertical ABS sewer drain pipe (unpressurized), in my wall that has a crack running lengthwise for around two feet and slowly getting longer. I've called a plumber to replace it, but he won't be able to do so for 2 weeks.

Since this pipe drains the kitchen sink and the dishwasher, in the meantime it's dripping a lot. I'd like to put a temporary fix in place to reduce the dripping until the plumber comes.

The two main things I can see to use are silicone wrap tape (around the pipe), or epoxy putty (in the crack). Which would you use, and why? Or would you use something else entirely?

Photo of the dripping section of black ABS pipe below. I believe that a much larger section of pipe will need replacement to make it leak-free, which is why I'm having a professional do the permanent fix. Yes, the pipe there does look like an amateur install; I suspect it was. 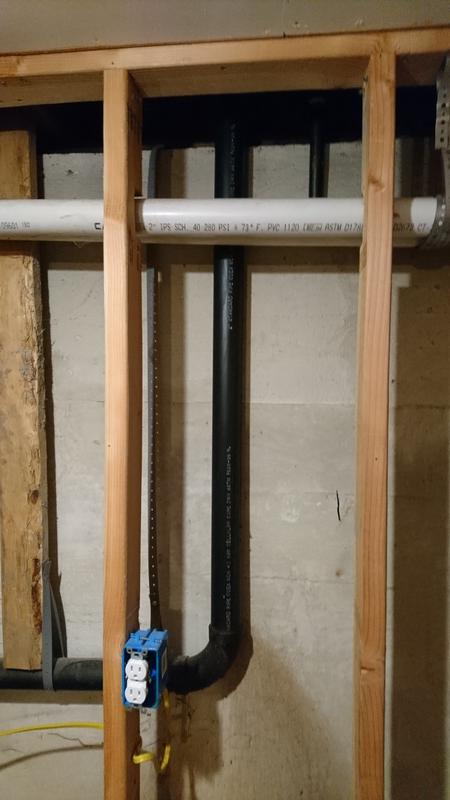 You are not proposing this kludge as a permanent fix. That's good.

The wrap-tape products are good for an emergency bodge, and that's what you are proposing, on a temporary basis. The problem with them is when they manage to stop the leak and then folks decide not to call the plumber (or do the plumbing themselves, whichever) after all.

I would also add a few stainless-steel band clamps, since the pipe is splitting, and that's a bit much to ask tape to hold. Put them over the tape.

I agree with @jeff wheeler that all of these temp fixes are more work than a proper repair: go to the hardware store and buy ABS pipe in the same diameter. You can buy it in either 2 foot or 10 foot lengths, whatever is appropriate. Buy two couplers in same diameter, called rubber fernco couplers.. Have store associate show you how to connect them as "dry fit" . Take home and cut out length of cracked pipe using a hacksaw. When cutting new pipe to length, allow for extra to go inside coupler. Fit all pieces again. Tighten clamps and you're done.

This assumes cracked pipe is a drain or a vent.

I would do one of two things, depending on access and tool availability:

Cut a suitable length of scrap 3" pipe, then rip slightly less than half of it out lengthwise. Apply purple primer to the outer surface of the old pipe and the inner surface of the new pipe. Apply pipe cement to those surfaces, then snap the patch in place over the crack and hold it tight for 60 seconds. It'll weld everything together rock solid.

Route the Crack and Epoxy It

Run a spiral-cut bit (Dremel or drywall cutter) down the crack, cleaning it out and opening it up. This will also serve to relieve the stress at the ends of the crack by spreading the load. It's an old aviator's trick. Then fill the channel with epoxy putty. Optionally wrap it all with quality tape.

There is a GREAT ABS repair product, you can actually use it to fabricate ABS tanks for RVs and campers, using it to weld-glue abs panels together. The product is called PlastiMend-black. You will need to cease using the upstairs sinks before and for several hours after you apply the patch for it to properly bond. (area need to be dry when applied. the product comes with fiber mesh tape to cover larger holes or cracks and the goop.

All said, simply replacing the section of pipe that is cracked as other stated is prob the best way to go

If you happen to have one, a 3D printer pen* can act like a plastic welder in this case. I would recommend against doing this for PVC, but ABS is what those pens often already use.

I'd first drill a tiny hole, as I suggested in a comment on Ecnerwal good answer. It doesn't have to be large, just 1/16" (~2mm) at each end of the crack to relieve stress.

Then starting from one of these holes, shove in your hot 3D pen and start adding new ABS. Yes, the idea is to melt the pipe a bit and mix in the new ABS. This will be more than just a "filler" patch, which could leak. This is where you are melting the existing plastic and shoving in more ABS to fill the crack while making the new plastic part of the pipe itself. Don't worry about making it look clean, leave plenty of plastic bulging out of the crack, as that's how you are assured it's going to work the best. It's not a guarantee, but it's far better than not using enough and having a leak.

Using this method may take a while and probably include some nasty odors, so make sure you have time and airflow working for you. If you don't take your time to make this work, you are going to make the problem worse, not better.

If the crack is a hairline, you could try using a plastic cement that slightly dissolves the plastic, but seeing as this is plumbing grade ABS, that might not actually soften the plastic. Also, you'll have to squeeze the edges of the pipe together to get them to bond, so you're creating extra stress on the pipe. It could work for a short time, maybe the weeks you need, but it might not.

When using plastic cement, make sure it goes all the way into the crack, or you aren't doing any sort of repair. Really thin, sometimes called "water thin", cements will do this for you, as long as you use enough. The thicker ones will need to be forced into the the crack as it's applied. Just shove the nozzle into the face of the crack and squeeze the cement so it bulges out the sides of the crack as you move along the crack. Again, you aren't trying to make this look pretty, you're trying to fix a pipe. Using "too much" is still better. Well, unless it's literally getting everywhere and you're wasting more than is in the crack.

If you or your kids make plastic models, the red tube of Testors cement* would be something to try. Unlike the blue stuff, this will slightly melt the plastic, and, because it's thick, will help fill the crack. Again, this is a temporary fix. And again, I'd start with drilling those strain relief holes.

* I'm not suggesting a retailer, it just happens to be an easy site to show the product(s) I'm talking about.

Other solutions are good. Especially if pressure within pipe is low.

Did pipe crack due to mechanical stress? Pipe may have been bent by forcing it past woodwork etc. New pipe may have same stress if jammed in. Check if other infrastructure installed later is compressing pipe.

After temporary fix, and if safe from electricity, wrap rag or something at lower elbow to direct possible leak into bucket.

I have used expensive silicone tape once to repair a small (1 cm) split. But that was a moderate pressure small pipe on a garden spray and I had to wrap the fix with baling twine to keep it on. The client already had the tape there - we used it as an experiment.

If it's actually ABS, ABS is soluble in acetone and you should be able to patch the crack by bathing it in 100% acetone nail polish remover for a while to soften it then binding it with rope to press it together as the acetone evaporates out of the plastic.

Not the answer you're looking for? Browse other questions tagged plumbing leak drain pipe abs or ask your own question.

2
How do I seal a cracked pipe using epoxy putty?

17
How do I fix a leaky toilet that only leaks from underneath?
6
Why mix cooking oil with epoxy to repair a toilet drain pipe?
1
Should I drill out pinhole leaks in cast iron drain stack before repairing with epoxy?
0
Can I use epoxy repair putty as a permanent fix for a screwed through water pipe?
1
What can cause a blockage in an otherwise decent main sewer pipe?
1
How to seal a pipe pass-through in a basement wall
1
Do I need plumber putty or would the already existing rubber gasket seal this sink leak if installed properly?
1
Repair leak in PVC elbow
1
Why did my plumber use a cast iron to plastic coupling in one location, but not in the other?