How to fix leak from flat roof under lead flashing

I live in a terraced house, built 1935, with a relatively new roof. As the picture shows, there is a bay with a gabled roof over beside another bay with flat felt roof. I have water damage to the part of the wall just under where the roof valley meets the flat roof, so I suspect water is coming in under the lead where it joins to the flat roof. I haven't been up there yet, not too keen TBH, but the lead looks reasonably fresh, so I think my guess is right.

How should a watertight roof joint/transition be constructed?

I would prefer to do it (or have it done) the right way, rather than just having some silicon slathered on, and if I pay somebody, I'd like to have some idea about how it should be done. 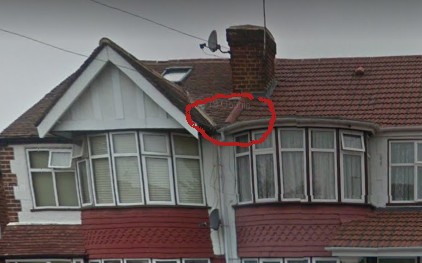 Your guess may be correct. From what I can see from the photo the valley flashing doesn't appear to extend all the way down the pitched roof (although that may be from the angle it was taken).

What it also can be from is the chimney above the flashing. Flashing chimneys is extremely detailed work and must be done properly.

Extend the valley flashing if necessary. Check for loose shingles and nails. Remove any obstructions impeding rain flow from the flashing and gutters. Look at chimney flashing; i should be embedded in the bricks mortar joints.

Not the answer you're looking for? Browse other questions tagged roof uk or ask your own question.

5
How do I fix a leak in this roof?
5
Leaking flat roof
0
question on the roof structure of my garage
0
How do I get under shingles to replace the roof edge flashing?
0
Repair roof flashing
0
Flat Roof Pitch
0
Ceiling insulation question
3
Fixing water ingress at mitred corner in roof fascia