Can my garage electrical panel be right beside the door?

Is there any issue with the electrical panel being within a foot of the side door that leads to the outside of the garage? Here is an image of the existing panel location with the proposed new location. In theory, I could shift the door a foot or two to the right if needed. 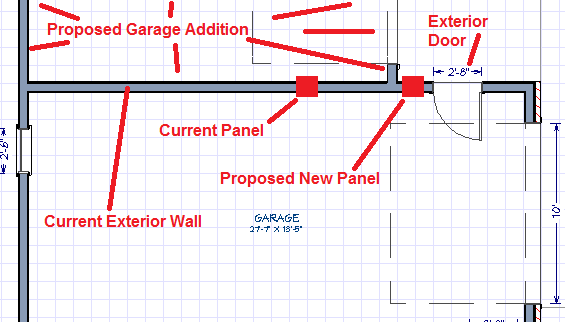 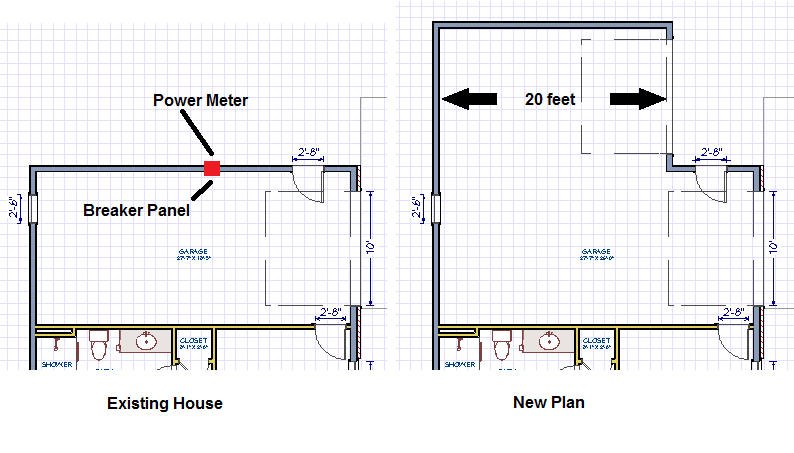 Maybe this new picture will help to clarify the situation more. The idea is that I want to add space for a second car, but I don't want to be without electricity in the house during the construction process of the addition. Since I'm already planning to redo the electrical wiring in the whole house before I even start on the garage addition (down the road), I want to move the electrical service to a better place. I've looked into some more options, and I think it might be possible to have the main service connect strictly at a box on the outside of the house, then run to an interior wall further inside the house where the breaker panel will be.

So, the plan is as follows:

Stage 2: In a couple of years, add on a second garage space, which is made easier by the proper planning of the electrical changes during Stage 1.

Looking at your drawing. There would not be a code reason that prevents you from putting your panel at that location, but there may be a practical reason.

You are putting in a 2'8" door which is probably prehung, so that would be about 2'11" or even 3' of space in the wall. Then you will have at least a double stud around it, and you may have the same at the "T" in the wall. Then there is a lintel above the door which may partially or completely block the area above the panel. Also you have to deal with the double 2x4 plate across the top. A loadcenter (residential panel) needs a 17" space for installation. Rough calculations show that you can install a loadcenter with about 2" to spare. You also need to consider the area above the panel. Does the lintel interfere with the conductors coming into it? What does the slope of the roof look like? Can you get in and out of the panel for expansion? Is this new wall loadbearing? Do you want a wall switch on that door, because it probably won't fit?

This all means that when you begin your remodel, you want to be very specific and coordinate that space with whomever is doing the walls and door or rethink the location of the panel.

The location as shown is not a problem. If you consider other locations or obstructions take into account the NEC requires a 30" wide by 36" deep clear working space in front of the panel. The 30" can be measured from either edge.

While Code isn't an issue for that panel placement, your utility's metering requirements are

While your proposed panel placement doesn't pose any Code issues, the fact that your meter's there means that you have to obey your utility's requirements about meter placement. (It's their cash register, after all!) In particular, they want 18" free on each side of the meter, and since you have an underground service and a rather tight area, achieving that by offsetting the meter can would be difficult at best.

Not the answer you're looking for? Browse other questions tagged electrical electrical-panel doors garage or ask your own question.