What does the latch position of a circuit breaker mean?

I bought a new home in December 2011. After some time the kitchen lights and the lights in the living room started to switch off randomly. Some days it would happen 3-4 times in a row. Other days it would only happen once.

We have had an electrician come out to our home several times to fix it. The first time he replaced the circuit breaker. I'm not sure what he did the second time, but that didn't help either. The 3rd time he cut some wires in each of the 6 kitchen ceiling light "cans". That didn't help either. Then he decided to put the kitchen lights on a different circuit than the lights in the living room. That helped. We haven't had problems with the lights going out since then - until now.

There were only 9 light bulbs on that circuit. That’s 900W at maximum. At a voltage of 125V, the load is approximately 7.2AMPS. The circuit breaker has a nominal value of 15AMPS. So it was definitely not a load issue. And it wasn't a faulty circuit breaker either. So then it must be a wiring/circuit problem. Solving such a problem requires either 1 re-wiring or 2 identifying the bad wire. The electrician did neither. He just moved the living room lights over on a different circuit. This is a quick-fix. It's not a solution to the problem. It's masking/hiding a problem. If the lights were moved back on the same circuit we would have the exact same problem.

Long story short: I have taken some pictures of the circuit breaker. As far as I know the latch position tells something about what the problem is, but I haven't been able to find information about what the different latch positions mean, so I'm hoping that somebody here can tell me. 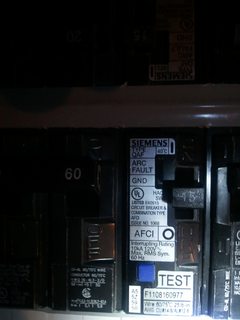 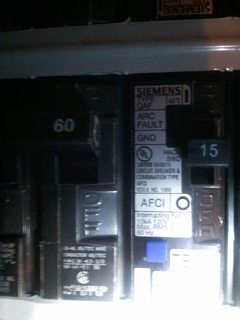 If you're referring to the circuit breaker switch being in the middle after it's been tripped, that's just the "tripped" position. As far as I know it doesn't tell you anything about the reason.

You have arc fault breakers, which means the breaker was tripped because:

Based on the relatively low loads and intermittence you describe, I would guess it's an arc fault issue. Perhaps a faulty wiring connection. Maybe it's being jostled occasionally if someone walks nearby and causes just the right vibration or something. Or as Steven mentions in a comment below, a faulty switch could cause an arc fault.

Important factor here: your photo shows that you have an arc-fault circuit interrupter. That means that there's a second condition besides total amperage that can trip the circuit. Particularly if this happened at the same time that a light burned out or you turned one on / off, the arc sensor could trip the breaker.

A breaker that is halfway between the on and off positions is the usual location for one that has tripped itself.